It’s a very even competition

It’s early days but already we can start to formulate who are likely to do well this year and who’s gonna struggle.  Like Brisbane Roar last week, I think the Central Coast Mariners showed that they will be a top tier team at the end of the season as they showed great tenacity against the Melbourne Heart to go from losing 2-0 with twenty to go to somehow stealing a point by the full time whistle.  The game had the weirdest pre-match build on Fox Sports as the commentators kept harping on the fact that the previous five encounters had been scoreless at halftime.  The sideline commentator began his pre-match interview with Graham Arnold by asking whether the game would be dull.  Huh?

The crappiest match of the round was in fact Newcastle Jets vs Perth Glory which ended 0-0.  It’s possible to have an entertaining scoreless draw but not when you have 1 shot on goal at halftime.  Yeesh.  Both teams look like they are in for a looong season.

Wellington Phoenix showed their worth by snatching a surprise draw at Parramatta Stadium against the Wanderers.  Things looked pretty grim in the opening half hour as the Wanderers had both the lead and the run of the play but an inspired substitution by new Phoenix coach Ernie Merrick saw the team storm back into contention and get a much deserved point.  A finals bound team?  It sure looks like it.  Now they just need some luck to go their way.  On a side note, the RBB fans at Western Sydney still create far and away the best atmosphere in the competition.  I’d love to get to Western Sydney for a Roar vs Wanderers game one day…

Are Adelaide United a genuine chance for the title this season?  I have no idea.  They’ve scored five goals in two games and sit second in the table but they were helped enourmously on Friday night by a grossly incompetent referee who gave them a dubious penalty and incorrectly ruled a Melbourne Victory goal offside.  They probably should have been able to see out the game from there but they allowed the Victory to come back into the game.  I like the look of Adelaide’s attack but I think their high line defence looks pretty brittle.

It’s not been a great round for marquee players.  Del Piero, Heskey and Kewell are all injured and either played for a few minutes or missed this round entirely.

So promising early signs if you’re a Victory, Phoenix or Mariners supporter.  I guess you’d be mostly happy with Adelaide.  On the other hand, if you’re a Glory, Jets or Sydney supporter… 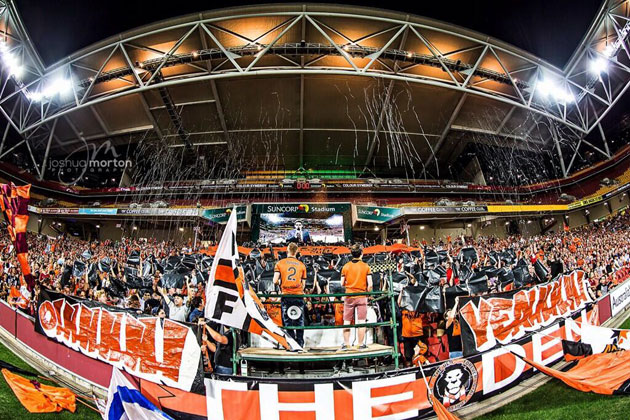 It’s the first home game of the season!  Finally, after 180+ days of waiting, football had come back to Brisbane.

21,000 fans turned up for the occasion to see the Brisbane Roar take on Sydney FC in a top of the table clash.  Things started out on a negative note for both teams – the two star players, Besart Berisha and Alessandro Del Piero, both hobbled off injured after half an hour.

Soon afterwards, the game sprung to life with Brisbane Roar scoring three goals in seven minutes of some truly awful Sydney defending.  The first goal saw the keeper fail to contain a regulation save.  The second goal saw Henrique bobble the ball into the net amongst six stationary Sydney defenders and the last goal saw our central defender Jade North stroll through some pedestrian Sydney defending.

In the second half, our complete and utter domination continued as we had 60% possession, 200 more passes, 12 shots on goal to 1 and eventually, a fourth goal from Thomas Broich.  It was hard to tell how good we were and how much we were being flattered by Sydney’s sheer terribleness.

I shouldn’t complain.  It was a fantastic homecoming for the Roar and it was wonderful to see both the old players from last season, the new blood and the return of the prodigal son, former captain Matt McKay.  McKay had only flown in from Socceroos duty in England three days ago and despite the jetlag, he managed to play a solid 80 minutes, including the set up for the second goal.

As for our season ahead, Jen and I are a little concerned about our new seats.  They provide a fantastic view of the field but we’re stuck behind The Worst Ever British Family.  Crap Dad brought along his son that he doesn’t pay any attention to.  So this ratbag kid kept kicking the back of our seats for the entire game and randomly throwing trash into the aisle out of sheer boredom.  Crap Dad just ignores this.

Crap Dad’s friend also came along and he spent the entire game complaining that the A-League isn’t up to the standard of the English Premiere League for the full ninety minutes.  He was shocked, shocked, that this nine year old competition with a salary cap of $2.5 million for the entire team was somehow not producing players of the calibre of Wayne Rooney and Robin Van Persie.  Literally, they were the people he was comparing the Roar and Sydney FC players to.  Depressingly and somewhat inexplicably, the ‘why isn’t this like the EPL’ guy was wearing a Roar shirt and apparently has a season pass.  Whhhhhyyyyy????

I’m cautiously optimistic that they will just stop turning up.