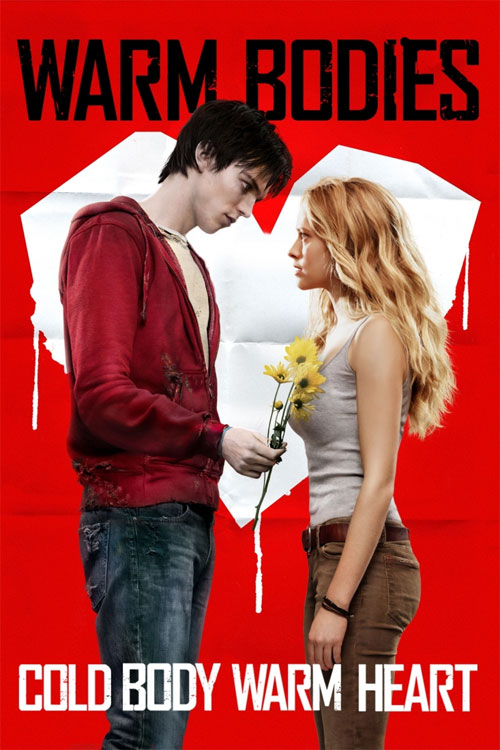 Warm Bodies is a ridiculous idea that I’m guessing started out as a dare or a script written under the influence – ‘why don’t we do a zom-rom-com?’ – and is seen through to an improbably well made and entertaining final product.

In Warm Bodies, we begin with a narration from an undead zombie who eventually comes to be known as ‘R’.  R has been a zombie for as long as he can remember and he spends his days shuffling around an airport with thousands of others in a post-apocalyptic future.

In the world of Warm Bodies, the zombies are known as corpses and are the slow shuffling, brain eating creatures of popular lore but they retain a fraction of humanity inside them.  R is capable of internal monologue, has turned the inside of a 747 into a homely den and likes to engage with Rob Cordry, former correspondent of The Daily Show, in a stilted conversation of groans and single words.  He has the capacity for friendship and as it turns out…love.

R’s world is turned upside down when he participates in the slaughter of a group of human survivors, only to fall head over heels in love with the beautiful Julie.  To make matters more complicated, he becomes smitten mere moments after devouring the brains of her boyfriend Perry.

R saves Julie, takes her to his den and begins to develop a relationship with her that slowly begins to humanize him.  Julie gradually warms to R also and their relationship blossoms.

Unfortunately for R and Julie, an already harsh and terrible landscape is about to get worse.  The Bones, monstrous versions of corpses with no shred of humanity left, are building an army to kill the surviving humans and corpses.  As an added complexity to the proceedings, Julie’s father, Colonel Grigio, is the leader of the human survivors and is determined to rescue Julie and wipe out the corpses at all costs, R included.

You’ve probably picked up from the names of the leads that Warm Bodies is not only a zom-rom-com but it also half-heartedly invokes William Shakespeare’s Romeo and Juliet.  It lampoons some of the most famous scenes but it only really loosely follows the structure of the play when it suits.  This is probably for the best.

At the end of the day, director Jonathan Levin, lead actors Nicholas Hoult and Teresa Palmer take a ridiculously silly idea and deliver a film with heart, a sense of fun and some genuine laughs.  This film is never genuinely scary or knee slappingly hilarious but it is good natured and easy to like.

I have a hunch that either of the leads in this film could go on to bigger things.  A quick look on their profiles in IMDB shows that Hoult scored a role in the new X-Men film and Palmer will be a love interest opposite Liam Hemsworth in a war film.  We could well look back on Warm Bodies as that weird little cult movie that produced a couple of major film stars.

Summary : A zom rom com sounds like an entertainingly bonkers idea on paper but its executed with surprising success. A sharp script and great performances from Palmer and Hoult make this improbably concept work.