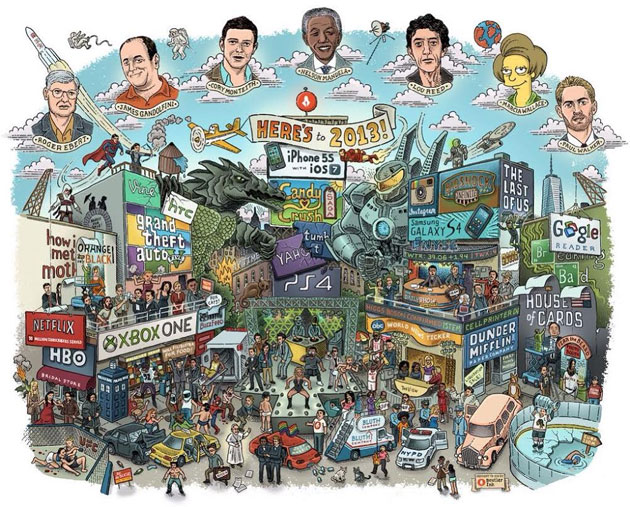 I didn’t think I had been this behind on my movie-watching or my blogging.  I sat down this evening to write a list of my ten favourite films of the year.  You’d think it would seem like light work after recently compiling a list of one hundred games!  Yet I came up with about four films.  Then I sat there and stared.  There were a few more I’d forgotten from the start of the year.  Don’t forget I’m counting films by their Australian release date so there’s a handful of highlights from the last Academy Awards season.  But ten?  It was a struggle to get to ten.  There’s about three films on this list that wouldn’t even make the honorary mentions list in previous years.

It’s just been that sort of year.  A lot of films that I’ve been watching in my spare time have been Hollywood classics from yesteryear.  I went to the cinema fewer times this year than any other I can recall.  No real reason.  Just busy with life.  There’s plenty on my To Do list that I haven’t seen.  I’m told some of the best films this year include Blue Jasmine, Inside Llewellyn Davis, Her, American Hustle, Captain Phillips, 12 Years A Slave, Nebraska and To The Wonder but I haven’t seen a single one of them.  Yet.

Anyway, here it is, my Top Ten Films of 2013.  There’s probably some odd choices in here you might not expect but I insist on ten each year.

This film was a complete surprise.  Rush is a film about the rivalry between James Hunt and Niki Lauda, two polar opposite personalities who clashed in a memorable 1976 Formula One season.  It’s a film that has all the best qualities of a well told true story – it requires no prior knowledge or appreciation of the real events to enjoy.  In fact, it’s possible that the less you know going in, the more likely you will enjoy this.  Incredible action sequences on the track, a wry sense of humour and a wonderful look back at a strange, dangerous, bygone era.

Click here to read the full review of Rush

I still maintain that Quentin Tarantino’s Django Unchained is about forty minutes too long.  You could probably say that about every film he’s done since Jackie Brown.  Regardless, somewhere nestled in amongst the excess is a glorious, sharp tongued spaghetti western about a slave named Django who forms an unlikely bond with a Doctor and carries out a bloody revenge on the plantation owner who took his wife.  You can probably skip the scenes with ‘Aussie’ Quentin though.

Click here to read a review of Django Unchained

It’s a sequel that wasn’t really necessary but who cares?  Monsters University is a pleasant, warm-hearted prequel to Monsters Inc. in which we get to see Mike and Sulley in their college days as they first form their friendship.  This film is more or less the Pixar creators having a bit of fun with the Monsters Universe lore and cramming in some references to their favourite Eighties frat-house movies along the way.  For something that appears to follow a well trodden formula, Monsters University does have some rather unexpected twists in the tale at the end.

Click here to read a review of Monsters University

This film blew me away and left me breathless.  I didn’t really know what to expect with The Impossible.  In fact, I was pretty indifferent to the film in its pre-production.  It was only through strong word of mouth that I gave the film a go and I’m glad I did.  The film gave me a much greater appreciation for what happened in the Boxing Day Tsunami disaster.  The film is brutally realistic, occasionally difficult to watch, but worth it for the extraordinary effects.  Very little CGI was used in the making of The Impossible.  Most of the time that you’re seeing people getting slammed around by tides of water, its actually happening.

Click here to read a review of The Impossible

Film of the Year

If you haven’t already seen Gravity then its too late.  It’s an incredible experience but one that really needed to be seen on the biggest IMAX cinema screen in your town with the loudest Dolby Digital sound system and the most eye-ball meltingest Real3D technology you can get your hands on.  If you don’t see it that way then you hugely diminish your own enjoyment of this spectacle.  Part film, part theme park amusement ride, Gravity offered up one of the most exhilarating cinematic experiences this year.

A zom-rom-com about an undead teenager named ‘R’ who finds love amongst the living when he crosses pathes with the beautiful Julie.  A creative, surprising and sweet film based on a ludicrous premise.  Also, its nice to see Rob Cordry, formerly of The Daily Show fame still finding work.

Click here to read a review of Warm Bodies

The sequel to The Hunger Games ups the stakes in the competition, expands the lore of Panem and gets downright mushy as the love triangle between Katniss, Peeta and Gale gets complicated.  As popular teenage fantasy series go, its a lot closer to Harry Potter in terms of its quality (both the story and underlying messages) than, say, Twilight.  Its shows the versatility of Jennifer Lawrence who’s able to hold her own as an action star in all ages popcorn fare one second…

Click here to read a review of The Hunger Games: Catching Fire

…and then put in an Academy Award nominated performance in a David O Russell film the next.  Silver Linings Playbook is a fun, Oscar-bait film about two outcasts in society who find one another and embark on a quirk, tumultuous romance together.  It’s the sort of stuff that the Academy has lapped up since As Good As It Gets and guess what?  I kinda like this stuff too.  Especially when you’ve got leads as likable as Lawrence and Bradley Cooper.

Click here to read a review of Silver Linings Playbook

Huge, heavily armed mech robots hitting giant sea monsters, fighting over the fate of the planet.  That’s how Pacific Rim starts.  Gradually, it ups the stakes by introducing more monsters, bigger monsters and bigger weapons for the humans to destroy them.  The beauty of this film is its simplicity.  It’s clean, wholesome carnage without Michael Bay’s leery camera lens spoiling the moment.

Click here to read a review of Pacific Rim

The Nineteenth Century episode of The West Wing in which a politically embattled Abraham Lincoln must find a way to convince a gridlocked, filibuster-happy congress to pass an amendment freeing the slaves.  It’s not nearly as idealistic a film as you’d imagine.  It’s focused a lot more on the wheeling and dealing and the political pragmatism required to pass such a monumental piece of legislation.  It’s not really a particularly accessible film but for those interested in the subject matter, Daniel Day Lewis delivers an uncanny performance as Honest Abe.

Other great films this year that didn’t make the cut: Sadly, 2013 was the year that saw the passing of Roger Ebert, one of the most famous and celebrated film critics in the world and a big personal inspiration for appreciating and writing about film.  For anyone interested in learning more about Roger Ebert and his colourful life, I highly recommend his memoirs Life Itself.

And here’s the links to The FAT Website Top Ten Films from the past: