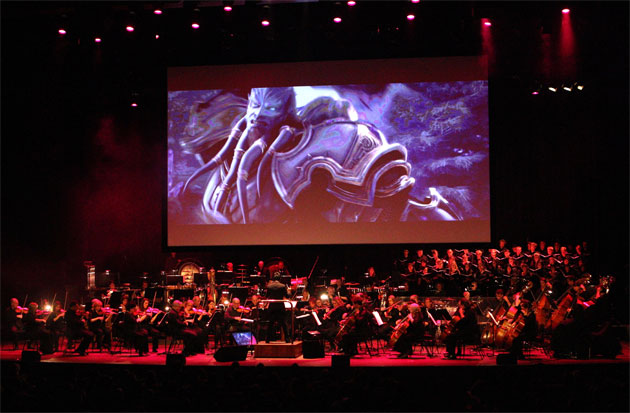 On Saturday night, Jen and I went to see the Queensland Symphony Orchestra play the musical scores from a bunch of video games.  It attracted a strange mix of people.  Half the audience was dressed up for a conventional theatre night to watch an orchestra performance.  The other half of the audience dressed like they were going to a comic book convention.  When you look at the audience there was a bunch of guys in collared shirts and dress pants, women in evening dresses sitting next to dudes wearing black t-shirts and jorts.

The confused, semi-well-dressed audience not withstanding, this was a pretty fun night out.  Although the game industry has seemingly struggled to attract talented writers and cinematographers in its formative years, it doesn’t seem to have had any problems finding virtuoso conductors and musicians who have created more memorable chip-tune soundtracks on those rudimentary 8-bit and 16-bit home consoles than should be possible.  Over the years, even more time and energy has been put into video game soundtracks and nowadays we’re in a fantastic position where even Academy Award winning artists like Gustavo Santaolalla (Babel, Brokeback Mountain) are creating the score for games like The Last Of Us.

The selection of tracks chosen for Symphony of Legends was pleasingly diverse, incorporating music from games old and new, from PC to Playstation.  Nintendo soundtracks were conspicuous by their absence but I presume that must be some type of licensing deal.  One of the highlights of the evening was the unannounced attendance and conducting performance of Austin Wintory who created the score for Journey.  Not only did he conduct the music for his own work but he also lead the performance for the Grim Fandango game (one of my favourites!).

A fun night out.

Previous: Initial Impressions – The Legend of Zelda: A Link Between Worlds and Ryse
Next: A-League 2013/14 – Round 6 & 7 – Conquering the Wanderers