It was a bit of a quiet round in the A-League this week with a couple of scoreless draws in the mix.  Sydney FC continue their resurgence with a club record fourth consecutive victory, this time over the Newcastle Jets.  It’s strange that the club currently sitting in 3rd has a goal difference of just +1.  Wellington are somehow still without a victory to their name this season even though they came close against the Wanderers.  A club that is difficult to read at the moment is Central Coast Mariners.  They are the defending champions in the competition but currently lie in sixth place.  They’ve also played a game less than most other clubs due to the postponement of their fixture against the Phoenix.  However, they looked really flat against Melbourne Victory and only have two wins to their name this season.  Life after coach Graham Arnold might prove to be tough for the most consistent club in the competition.

The match of the round was the crazy Melbourne Heart v Adelaide United game which was potentially seen as a fixture to decide who would be the first A-League coach to lose their job.  As it turns out, the match was so bizarre and high scoring that its possible both coaches have earned a stay of execution.  The Melbourne Heart fan base, the Yarraside, conducted a silent protest in the first half of the game.  I don’t really know the specifics of the protest but it seems pretty shitty for a club’s fans to treat their players like that when they need them the most.  The Heart looked gone for all money after they went down 2-0 giving up a pair of soft goals and this frustration was cemented when hapless Maltese striker Mifsud missed three, maybe four, one on one chances with the keeper.

Who knows what John Aloisi said at halftime but the Heart came out firing and unexpectedly scored three goals in succession, momentarily taking the lead and giving the Heart their first sniff of a victory in twelve rounds.  Alas it wasn’t to be as a Massimo Murdocca own goal leveled the score and the game finished a draw.  For some fans, it was enough.  The club went nearly four hours without scoring at home so we were treated to the sight of some diehard supporters celebrating as though they’d won a Grand Final. 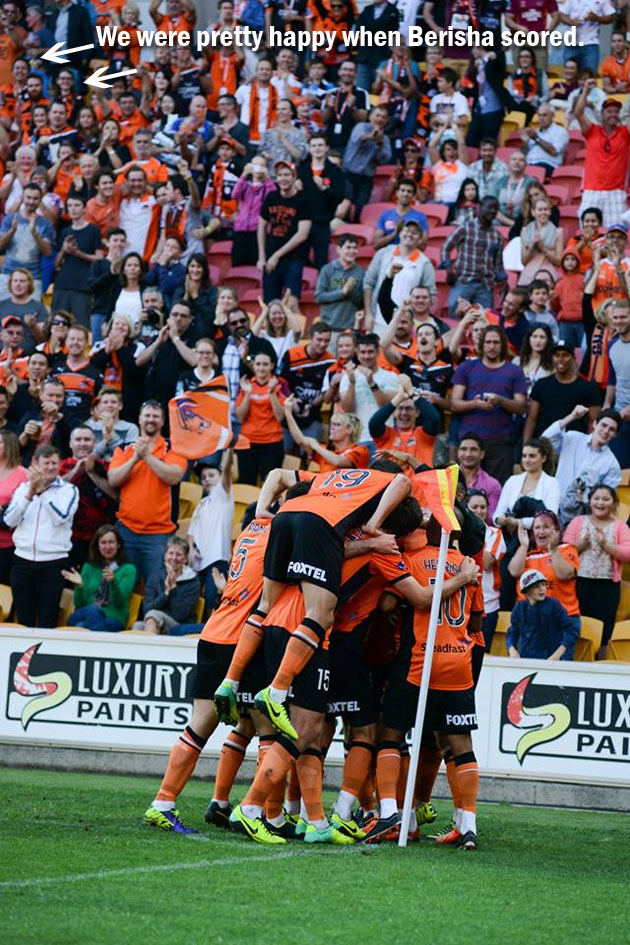 Thanks to the Wanderers being held to a draw, Brisbane Roar were able to stretch their lead at the top of the table to 3 points thanks to a Besart Berisha goal against Perth Glory.  The game was a pretty tough slog after the razzle dazzle and spectacle of last week’s 3-1 victory over the Wanderers.  It showed Berisha’s class and his clinical finishing that he was able to make something out of nothing.  Thomas Broich provided the assist to Berisha at the edge of the penalty area and he made some room for himself and fired past Glory keeper Danny Vukovic to secure the win.

That bring’s Besart Berisha’s goal scoring tally to 38 goals in 60 games.  The rumour mill has started again about what he’ll do when he comes out of contract at the end of the season.  Although Berisha loves Brisbane, there is a real chance that he’ll leave as Thomas Broich occupies the lone foreign marquee position in the club (who can be paid any wages outside of the team’s salary cap).  There’s going to have to be some creative Sydney FC accounting to conjure up the funds to keep Berisha at the club I suspect.  For now, I enjoy watching his as much as I can.  He’s been a special player for the club.  I hope we find a way to keep him.

This game was also notable for having the worst referee.  He was just…so, so awful.  *shakes head*