The Human Centipede tells the tale of a mad German scientist who kidnaps unsuspecting visitors to his home in the woods, which is conveniently located near a stretch of road where cars break down for no reason.

A modern day Frankenstein, he loathes humans but aspires to create a ‘human centipede’, three people surgically attached from mouth to ass, so he can keep them around as a pet. You can refer to the diagram below as a visual aid (credit to Roger Ebert’s review for this handy diagram): 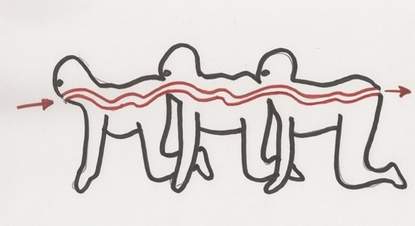 Does this sound like a movie you want to watch?

The film gained some notoriety when it first started screening at horror film festivals late last year.  Then when it gained a wider release, there were reports of people walking out of screenings in disgust and Roger Ebert in his review declined to give the film any rating whatsoever.  ‘It is what it is,’ he declared.

As for me, after a rather miserable 90 minutes, I can conclude that this is one of the most unenjoyable films I’ve seen in years.  And I’m saying this as someone who saw Street Fighter The Legend of Chun Li in January.

On a technical level, the film is actually pretty well directed and acted.  Director Nick Six expertly succeeds in creating a sense of dread from the get go and without the aid of an overbearingly spooky soundtrack as a crutch.  Likewise, actor Dieter Laser (what an incredible name) is believably creepy as the mad doctor and has a fantastically expressive face.

I was with the film up to the creation of the human centipede about midway through.  Unfortunately, this is where Nick Six and I part ways in where the film should go.  I was hoping for some sort of anarchic, chaotic or surreal crescendo to the film.  Instead, we are shown scene after scene of the victims wincing and wailing with little else happening until the closing scene.  I wanted the film to revel in its silliness but the director seemed more interested in showing us the actors groaning in pain.

Nick Six has stated that he intends to make a sequel with a twelve person centipede.  I will not be watching this film.  I would, however, be interested in watching the DVD extras if they included some footage of the auditions as various actors learn the nature of script and seeing how they react.  Seriously, who agrees to be in this stuff?

Tagged with: ass to mouth the human centipede

Previous: Forza 3: Return of the Towelie-mobile
Next: iPad App of the Week