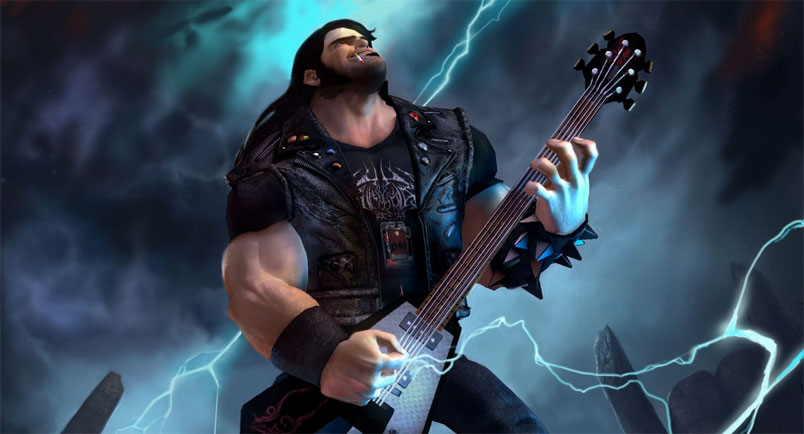 
Tim Schafer, the creative mind behind Brutal Legend, is gaming’s own Joss Whedon.  Critically lauded, commercially unloved and a producer of cult classic.  Brutal Legend is easily Schafer’s most commerically viable video game and even then it almost didn’t happen with Activision refusing to publish the game and then attempting to block EA from doing the same.  Fortunately, the game managed to battle its way through litigation and find its way onto the shelves.

The game stars Jack Black as roadie Eddie Riggs, a roadie who is killed onstage during a concert but then is resurrected in a fantasy heavy metal world inhabited by demonic creatures, nubile women and famous rock artists such as Lemmy from Motorhead and Ozzy Osbourne.

As with previous Schafer titles, the game oozes charm and is packed with entertaining characters.  The game really thrives in its fantasy setting and riffs on heavy metal archetypes affectionately.  There are meathead headbangers and improbably proportioned women but the game never makes them the butt of the jokes or is too leery in is humour.

The play mechanics in Brutal Legend are a little rough (as with most Schafer games) but at least it does something quite unusual and interesting with them.  The game starts out as a single player action adventure game but gradually it starts introducing controllable followers which ultimately act as a tutorial towards the ‘stage battles’.  The stage battles involves the creation of different unit types to defend a base and take over the enemy territory.  At this point, the game has turned into a full blown real time strategy game where ‘fans’ become the currency for developing new vehicles and soliders.  It’s an interesting take on the genre and was completely unbenownst to me when I purchased the game.  To date, this is the first and only console ‘RTS’ of any description that I’ve owned and played through to completion.

Ultimately, the presentation and quality of the writing is the star of the show however.  Schafer’s writing is handsomely translated onto the screen by Jack Black, Ozzy Osbourne, Tim Curry and many other talented voice actors who all sound like they are having the time of their lives.  The passion that the cast have for the heavy metal genre shines through and makes the game that much more fun to play.  The soundtrack is excellent as one would expect, with plenty of tracks that are selectable via an in-game radio ala Grand Theft Auto.  Occasionally the game steps in and imposes a soundtrack on you for certain scenes but these are also well chosen.  A driving sequence where Eddie escapes a crumbling Palace of Pleasure set to Dragonforce is a particular highlight.

The story of Eddie Riggs’ battle against the demonic Deviculus is genuinely interesting and well told.  There is a simple yet effective good versus evil story which is supplemented with a love triangle subplot.  Although one of the twists towards the end of the story felt a tad unnecessary, the positive is that it seems to open the door to a Brutal Legend sequel (the game certainly doesn’t seem to answer all the questions that it raises).  Full of uncommonly good humour, a huge open environment with plenty of unlockable goodies and one of the best presented stories of the year, Brutal Legend is a memorable experience and easy to recommend.  Here’s hoping that it doesn’t get overlooked in the glut of other high profile games that are being launched around this time of year.

An axe-wielding roadie who saves the world by melting demon’s faces with his guitar playing. Thats right.

Summary : There's a weird bait and switch going on for how the game eventually ends up but I still enjoyed it. Its full of classic music, great voice acting talent and a great sense of humour.