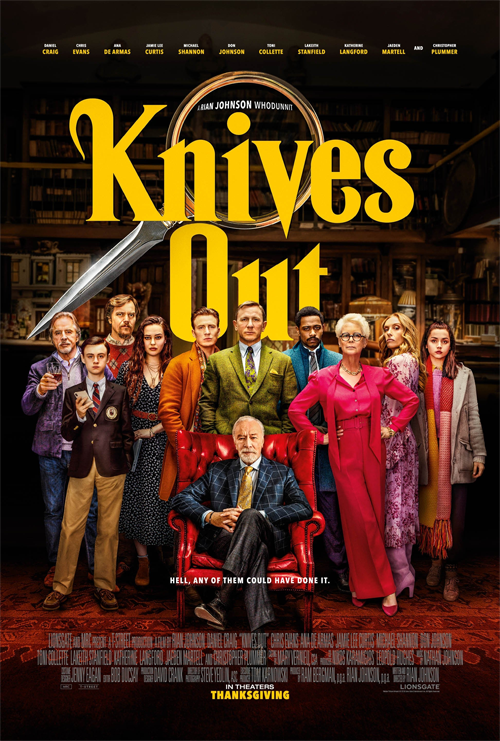 Are you up for Knives Out?  You’ll know within the opening few minutes of the film whether you’re game for Rian Johnson’s satirical whodunnit when Daniel Craig begins to talk in the most ridiculous, OTT, Foghorn Leghorn accent I’ve ever heard for his character Benoit Blanc.  Knives Out proudly wears its Agatha Christie inspiration on its sleeve with its country manor setting, tweed jackets, feuding families and the presence of a sharp-witted private detective.

Successful author Harlan Thrombey invites his family over for his 85th birthday.  Amongst the guests are his son Walt (Michael Shannon) who runs his publishing empire and is frustrated that he won’t open up the licensing rights for his books to be made into tv shows and movies.  His daughter Linda (Jamie Lee Curtis) and her philandering husband Richard.  His son Ransom (Chris Evans) who is a spoilt playboy that doesn’t bother to hold down a job.  And Joni (Toni Collette) the widow of Harlan’s deceased son Neil who is a lifestyle guru and influencer.  Oh, and Harlan’s beloved nurse and closest confidant Marta (Ana de Armas).  It is Marta who finds Harlan dead in the morning, his throat gruesomely slit with a knife.

Who’s the chief suspect?  Well as private detective Benoit Blanc (Daniel Craig) quickly ascertains, all the Thrombey siblings could rightly be considered.  All of them on the night of Harlan’s death appear to have been cut out of his will for one reason or another.  Blanc suspects the clue to identifying the murderer is right there on the property so he asks the family to stay for a few days and goes hunting for clues…with Marta as his chosen sidekick.

The opening act upends expectations for this genre by making Marta the central figure of the film (Agatha Christie generally had little time for carers, maids and butlers in her books).  We come to understand that Marta stands to be most affected by Harlan’s death as she used her wages to care for her family who are wholly dependent on her.  The film memorably reveals the true nature of the Thrombys and their insincere relationship with Marta as each one misidentifies her country of origin and tells her to her face that they though she should’ve been at the funeral but were ‘outvoted’ by the others.  I think it’s the 2019 version of Bradley Whitford’s “I would’ve voted for Obama for a third time” speech. 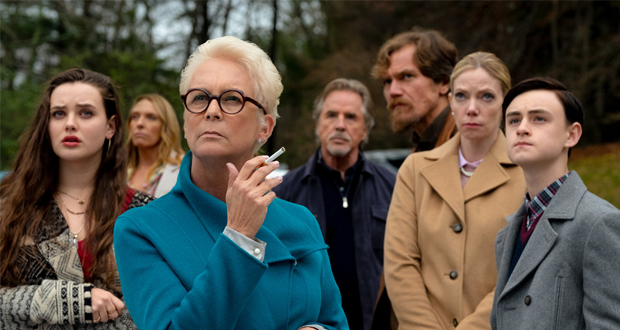 Knives Out is a lot of fun and keeps audiences guessing from the outset by knowing the well established rules of the genre and bending those expectations.  An early plot twist appears to reveal what happened to Harlan much sooner than expected but very quickly audiences are left scrambling as revelation upon revelation changes what we think we know.  What I admire about the construction of Knives Out‘s narrative is that it never ‘cheats’ when it arrives at its final conclusion.  There isn’t the late arrival of a new character or a grand reveal of a person in disguise that explains Harlan’s death.  In fact, its quite possible for an attentive viewer to work out what happened based on what Rian Johnson shows us.

I loved Knives Out.  It is a cleverly and intricately plotted whodunnit that tips the hat to Christie’s formula but is bursting at the seams with fresh ideas of its own.  I like that Johnson cheerfully sprinkles the film with his political ideology and makes the film very much a product of the current climate in 2019 with topics about refugees, the Trump presidency and the alt-right movement all fair game.

The cast look like their having a ball and although its difficult to pick out any one star, I think credit must go to Ana de Armas who manages to shine amongst an array of famous faces.  Her performance as Marta – strong, resourceful, resilient – is a significant part of what makes the film so enjoyable.

One last note – the final shot of the film is a beauty and one of my favourite of the year.

After a challenging couple of years for Rian Johnson as he dealt with a tidal wave of angry Star Wars fanatics post-The Last Jedi, its great to see him land on his feet in such emphatic fashion.  Knives Out is probably his best work to date.

A detective investigates the death of a patriarch of an eccentric, combative family.

Summary : A charming and well constructed who-dunnit. One of Johnson's best.

Previous: The Irishman
Next: Top Ten Video Games of 2019