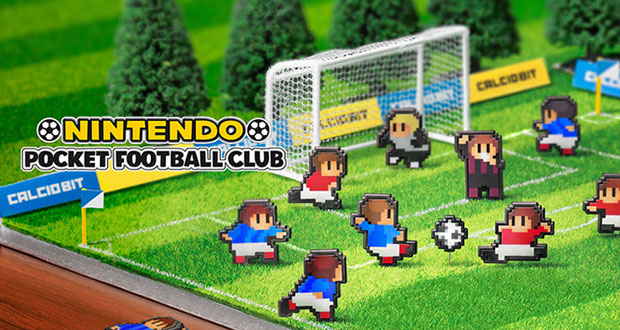 I didn’t really expect that in 2014, my most played video game system would still be the humble Nintendo 3DS.  There’s only a trickle of software being released on the Xbox One and the Playstation 4 at the moment and the gradual wind down for the Playstation 3 and the Xbox 360 has left me turning to the 3DS for new games to play this year.  Nintendo 3DS owners have been spoiled for choice as there has been a stream of both first party games (Mario Golf, Kirby Triple Deluxe, Yoshi’s New Island) and third party games (Bravely Default, Phoenix Wright x Professor Layton).  There have been some pretty entertaining digital downloads on the Nintendo eShop too.

One such title, prudently released just before the World Cup, is Nintendo Pocket Football Club.  This football manager game mixes retro-styled graphics with a simple level grinding mechanic that makes the game accessible to both football diehards and those looking for a more accessible experience.  There aren’t any actual licenses for real players or teams but they can be edited in  if the player so desires.  The core of the game is spent taking the training cards that are dealt out during each game and then applying them on the training field to develop your players further.  Combining certain training cards together will unlock particular skill that boost your players skill points even further.  The challenge for the player is balancing out who in your squad to upskill first, maximize their potential and then apply the right strategy when it comes time to play the actual game.

Each game takes place in a span of about five minutes and you don’t control any of the players.  During the game you can adjust your teams formation, choose an attacking or defensive mindset and select your coverage on the field.  You can also make substitutions when necessary and compare your results with other teams that may be playing concurrently.

Nintendo Pocket Football Club lends itself very well to passive gaming.  You can let the game unfold and leave it running in the background when you’re watching a real game of football on TV.  Or its a great quick fix spot of gaming when you have a few minutes to kill on public transport or preparing a meal.  In other words, its a perfect portable football management game.  It does exactly what it says on the tin very well.

The game has four leagues, an international tournament and allows for games over SpotPass and StreetPass.  It has enough depth to the training game mechanic to keep you engaged but is simple enough to not make football tactics and management a mandatory requirement for enjoying the game.

These little $15 games are a welcome addition to the Nintendo 3DS’s already burgeoning marketplace.  The system is well established with great platformers, RPGs, adventure games and puzzle games.  A fun little distraction, well worth the price of admission.

Summary : Pocket Football Club is a fun arcade management game that is accessible, easy to learn and a blast to play.