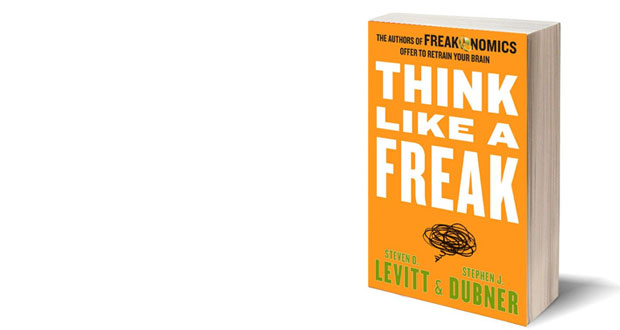 “After writing Freakonomics and SuperFreakonomics, we started to hear from readers with all sorts of questions…”

Steven Levitt and Stephen Dubner have built quite the media empire for themselves since they published Freakonomics back in 2005.  They wrote a successful sequel with Superfreakonomics, made a documentary, amassed a small fortune on the speaking tour, established a consultancy firm and they have a weekly radio podcast on NPR.  I know all this because I count myself a fan of their work and am a regular listener.

How To Think Like A Freak is their first book since SuperFreakonomics came out nearly six years ago and so I looked forward to its publication since it was first announced late last year.

Sadly, the book is a crushing disappointment.

How To Think Like A Freak is a departure from the format of their previous two titles which told intriguing tales of how incentives could influence different industries, occupations and personalities.  There was the memorable chapter about how match fixing in the sumo industry.  Maybe you remember the one about whether a child’s name influences their likelihood of prosperity in life.  A favourite of mine is the controversial chapter linking a drop in youth crime rates in America with Roe vs Wade.  There wasn’t really an overriding theme to these books beyond viewing these topics through the lens of an economist and a focus on telling an interesting story.

Think Like A Freak on the other hand, attempts to shoehorn these topics into a self help book so that you can think ‘like a freak’.  This is basically a thinly veiled way to say ‘how to think like Levitt and Dubner, as written by Levitt and Dubner’.  The concept is as conceited and obnoxious in print as it sounds in theory.

Worse still, this book is hugely bereft of original content for anyone who listens to the Freakonomics podcast.  I’d hazard a guess that a good two thirds of the content at least is taken straight from material in their radio program.  I remember this because some of that content was covered just in the last month or two!  (the chapter on learning to say ‘I don’t know’ was on the podcast three weeks ago so I still remembered the researchers name).  The story about Levitt’s daughter and her potty training experience is taken from the Freakonomics documentary.  And the closing chapter which is written as though it has saved the most revelatory and sage advice till last, the benefits of knowing when to quit, is such a popular podcast episode that it has been repeated more than once.

In other words, for anyone who is a fan of Freakonomics, you’ve pretty much read this book before you’ve read this book.  It would be one thing to retread old material if there was additional insight involved.  It’s another when you get the same story but minus the detail.  Subjects like Zappos, the online shoe company that pays you $2,000 to quit in the first month, are an interesting case study to read about.  But you get far more insight and content in a forty minute podcast than you do with a ten page chapter.  It feels like How To Think Like A Freak is just a cliff notes version of their greatest hits.  A broad overlay of the topic with none of the detail.

There is a little bit of new material here (or I didn’t listen to the podcast that week) but it seems to lack to incisiveness and wit of their earlier work.  Did you know that stress doesn’t cause ulcers?  That it’s important for a company to recognize their own faults if they want to succeed?  Or that driver-less cars aren’t necessarily a perfect solution to road safety?  Actually, I did thanks very much.  And I suspect most other people did too.

I’m probably sounding a bit harsh but compared to Freakonomics and SuperFreakonomics, I think this is a notable dip in quality.  For someone coming into the stories with fresh eyes, I think there would be some measure of interest, but there is nothing here to rival the work covered in the first book.  This feels more like a cookie cutter release ‘to keep the brand going’.  The stories are stale and the life coaching advice – understanding incentives, thinking with the unassuming perspective of a child and not being afraid to quit – comes off as unconvincing and tacked on.

Tagged with: Freakonomics How To Think Like A Freak Stephen Dubner Steven Levitt