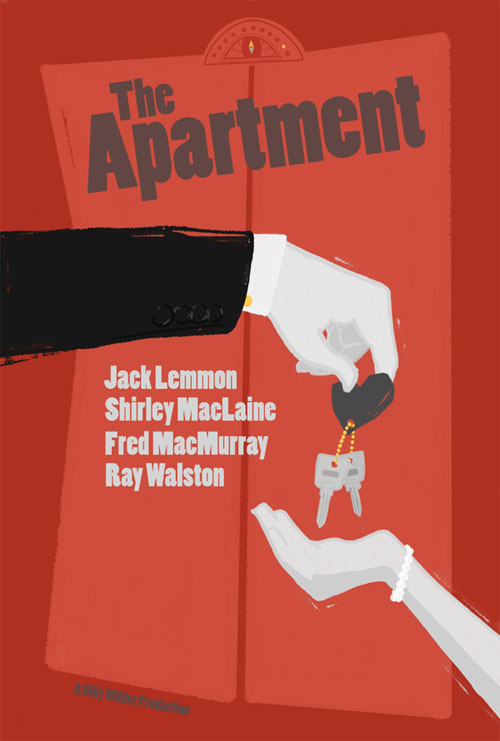 “On November 1st, 1959, the population of New York City was 8,042,783. If you laid all these people end to end, figuring an average height of five feet six and a half inches, they would reach from Times Square to the outskirts of Karachi, Pakistan. I know facts like this because I work for an insurance company – Consolidated Life of New York. We’re one of the top five companies in the country. Our home office has 31,259 employees, which is more than the entire population of uhh… Natchez, Mississippi.

The Apartment is a showcase for the exceptional talents of Jack Lemmon, playing his first romantic lead role opposite Shirley MacLaine.  It won Best Picture at the 1960 Academy Awards and if the film historians have it right, this is also one of the first ever films to blend comedy and drama.

This year I’ve been treated to discovering the exceptional filmography of legendary Hollywood director Billy Wilder.  He was a versatile and talented visionary who created classic films in genres as diverse as noir (Double Indemnity) and musical comedy (Some Like It Hot).  Even his lesser known works such as Ace In The Hole hold up extremely well thanks to the sharp wit and wry cynicism that is a trademark of his films.

In The Apartment, Wilder turns his harsh gaze on the morally bankrupt world of corporations. 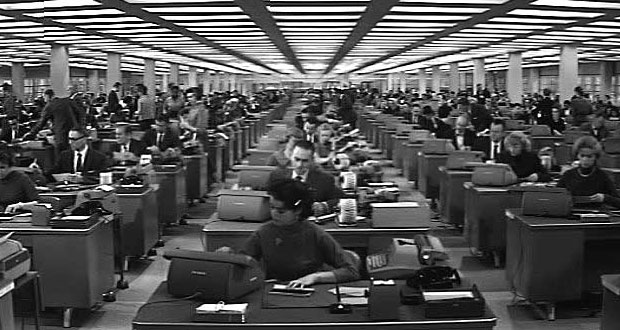 With Martin Scorcese’s The Wolf Of Wall Street still fresh in our minds, its pretty startling to see how familiar scenes from The Apartment can be, both thematically and visually.  The opening shot is of a giant soulless office that disappears into the horizon, filled with rows of drones plugging away at identikit desktops.  Remember the exact same shot with Leonardo Di Caprio at Stratton Oakmont?

The film’s central conceit is also about a good man who becomes corrupted and does a morally dubious thing to fast track his way to easy money and career progression.  In this case, Jack Lemmon plays C.C Baxter, an ordinary jobsworth who lets his apartment get used by executives who wanted a discreet but convenient place to bed their mistresses.  It means he sometimes has to sleep outdoors in the harsh New York winter but he shoots up the corporate ladder by way of thanks from an appreciate management team.

The head of Consolidated Life Accounting is Jeff Sheldrake, a married man with children who is bored of his wife and romantically pursues the young and beautiful elevator operator Fran Kubelik, played by Shirley MacLaine.  There is no doubt that Fran is in love with Jeff.  It’s less certain whether he feels the same way.  As his bitter secretary explains, he has a habit of promising divorce to his mistresses to string them along but it never seems to eventuate.  I have a feeling Jeff does love Kubelik, he just loves the power and money that comes with his job more.

Things get complicated when Baxter develops feelings for Fran without realizing she is one of the mistresses that is spending time in his apartment.  The cat is eventually let out of the bag when Sheldrake ditches her on Christmas Eve and in a moment of despair, Fran takes a bottle of sleeping tablets in an attempted suicide.  Baxter comes home for the night with a girl of his own only to find Fran passed out on his bed.  That’s when things get really interesting.

There is a real edginess to The Apartment which belies its cutesy DVD cover that makes it look like a saccharine rom-com.  There’s a scene early in the film when Baxter’s next door neighbour, a Jewish doctor named Doctor Dreyfuss, mistakes noises he hears through the wall of executives shacking up with their secretaries for Baxter having an inexplicably strong sex drive and an incredible prowess for bedding women.  It seems like the set up for a running gag about Baxter’s sex life but instead the film takes a turn when Fran attempts to kill herself.  Doctor Dreyfuss is called upon to help revive her during which he berates Baxter for his treatment of women.  Not everything is played for laughs. 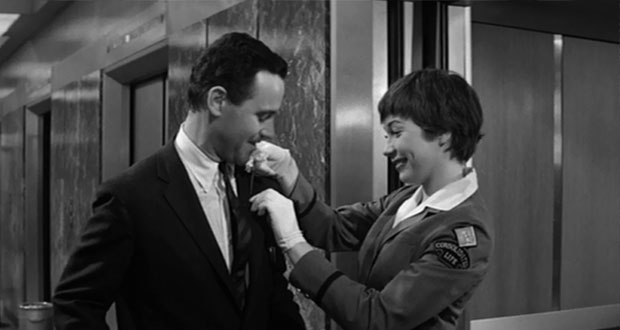 I love the banter in this film which is exchanged at pace with plenty of zing.  Wilder has a verbal trademark that I’ve noticed in his films where a character will say a line (“that’s the way it crumbles…cookie-wise”, “O-U-T, out!”, “be a mensch”) and then it will be repeated later on by another character, often in a completely different context.  I can’t really put my finger on why, but I love that.  It’s a technique that the Coen Brothers also use to good effect in many of their films, most famously in The Big Lebowski.

The Apartment is a refreshing film to watch because it isn’t quite like anything we have today.  A modern producer would likely trim out the office politics or give Baxter a whacky best friend.  We expect a romance between Baxter and Fran because that’s what we’re trained to expect with rom-com tropes but the two don’t share a single onscreen kiss.  Instead the film is subversive, edgy and has observational humour about gender roles and office politics that feel surprisingly contemporary.  Best of all, its one of the best exhibitions of what Jack Lemmon can do as an actor.  He has the manner and appearance of an everyman, doing his best to get ahead, given an unexpected leg up on his career when he is too polite and meek to say no to his boss.  It’s not an easy role to play but Lemmon is convincing in his portrayal of someone who means well but is in danger of being overwhelmed, both by Fran and the predatory managers at his firm.  We like him and cheer for him to do the right thing.  Lemmon puts in a memorable performance in a unique and thoroughly entertaining film.

The sexy and sordid world of corporate accounting in the Sixties

Summary : The Apartment is funny and subversive film about love, power and money in the competitive and sometimes dangerous world of accounting.