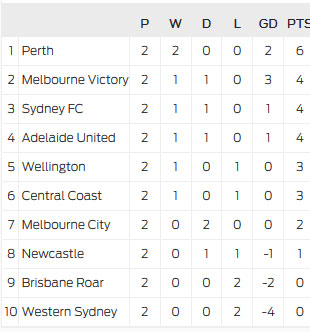 Brisbane Squander A Lead For The Second Week In A Row

Another week, another loss for the defending champs Brisbane Roar.  The Roar traveled away to Perth Glory – a club in turmoil last season but who look rejuvenated in the off season thanks to some canny signings by coach Kenny Lowe.  The game was an entertaining affair and presented a number of talking points for both teams.  In good news for the Roar, new striker Mensur Kurtishi scored his first goal for the club, finishing a clinic counter attack spear headed by Henrique who played an absolute blinder.  The Slipper Fish capped off a great afternoon individually by scoring the second goal for the Roar, a bullet from the edge of the penalty area.

The Roar however came away with nothing from their road trip thanks to two goals from Northern Irish international Andy Keogh who scored two goals for the Glory and poor old James Donachie scoring an own goal for the second week in a row.  Two games in a row now the Roar have very uncharacteristically given up a lead and clearly the back four is not what it should be with Donachie not looking comfortable replacing Ivan Franjic at right back.  The fans are clearly asking for Jack Hingert to get promoted back into the starting eleven as he presents a much more direct like-for-like swap for Franjic’s talents.  Better still, the club should try and get Franjic back from Russia.  I follow the club he moved to on Twitter and am yet to see him get a start.

Perth are now top of the table and have a new star in Andy Keogh who has three goals in two games.  Are the giants of the old NSL league finally due to have a big season in the A-League?

Own Goals For Everyone

In Round Two, the Melbourne vs Adelaide fixture at Adelaide Oval saw a record 30,000 fans turn up to cheer on the Reds.  The game itself was actually a pretty turgid affair with neither side looking particularly fluent nor showing their flair from Round One.  The game sprung to life in the last ten minutes when Sergio Cirio finally broke the deadlock and gave Adelaide the lead.  Their joy was short lived however as Melbourne Victory equalized in the dying embers of the game with a goal from Ben Khalfallah.  The goal showed the fortitude of the current Melbourne Victory squad and in the same way that Brisbane are showing worrying signs of lacking mental conviction to see out big games, Victory supporters must be feeling good about their squad playing a difficult away fixture and coming away with points despite not playing their best.

The Wellington Phoenix got their maiden win of the season with a come from behind victory over the Mariners.  Everything went according to the script with ex-Mariner Michael McGlinchey who was the subject of a long, drawn out court case between the two clubs scoring a goal for the Phoenix.  The game gave credence to two pre-season predictions: the Nix are a much improved squad over last year and this might finally be the year that Central Coast fall apart.

The highlight of the round was a five goal thriller in the Sydney derby in front of a sell out crowd at Allianz stadium with 42,000 fans packing in for a derby that is only two years old.  It was a feisty affair with goals galore and plenty of feeling as Vitor Saba was shown red for the Wanderers and Sydney FC’s Sasa Ognenovski earning a suspension in a post-match review.  Like the Roar, the Wanderers are struggling to recapture their form of the previous two seasons.  After two rounds, last year’s finalists are firmly rooted to the foot of the table with no points.

On Sunday, Melbourne City played their maiden home game under their new identity and scraped home with a draw against Newcastle Jets.  It seems pretty clear that the club are barely any better than they were last year and have been propped up for two games in a row by a goal from David Villa.  The fact that he is now unlikely to complete his advertised ten game stint for City must be worrying for fans.

Previous: Notorious [1946]
Next: Youtube Friday: Anatomy of a fight scene