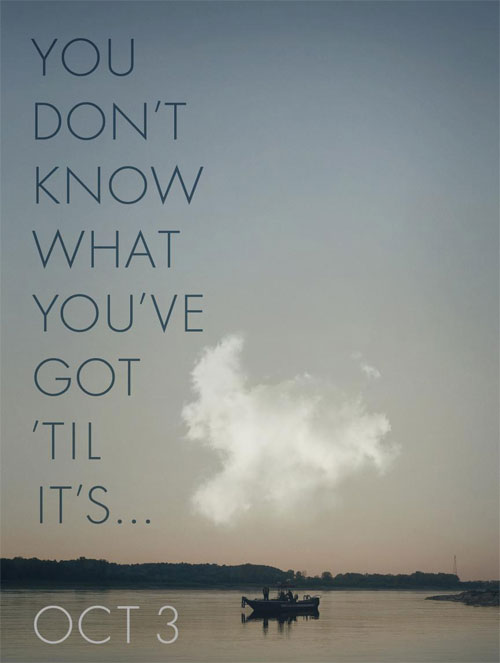 Ever since I read Gillian Flynn’s bestseller Gone Girl, I’ve been looking forward to its inevitable adaptation into a film.  The book was a real barn burner with each chapter throwing one curve ball at the reader after another.  It was the perfect thriller to read in a book club setting where you compare reactions with your friends and wait in anticipation for them to get to the chapter when that thing happens (Gone Girl has about five of those moments).  I’ve been pleased with every development since there was confirmation that the film was under production.  David Fincher was a great choice for director.  Ben Affleck would make an ideal Nick Dunne.  And Rosamund Pike was an intriguing choice for Amy Dunne.  When the positive reviews of the film started rolling in, I wasn’t surprised in the least.

The film is a dark and twisted erotic thriller in the vein of Basic Instinct and Fatal Attraction.  A bar owner named Nick Dunne, arrives home from work to find that his wife is missing with signs of foul play.  There is an overturned coffee table in the lounge and specks of blood in the kitchen.  He calls in the police to investigate and almost overnight, there is pandemonium in the town.  A media circus descends upon Nick’s house and the townsfolk excitedly want to get involved in the case.  Some see Nick as a quasi-celebrity.  Others volunteer their services to look for Amy.  But after a press conference delivered to the national media goes poorly – Nick seems disengenuous and awkwardly smiles when posing next to his wife’s MISSING poster – public sentiment begins to turn and he finds himself becoming a suspect.

The film is told via two timelines.  Present day – which is viewed from the perspective of Nick who increasingly feels the pressure of Detective Boney (Kim Dickens) who begins to suspected he isn’t being entirely truthful and Ellen Abbott (Missi Pyle), a pitchfork wielding media pundit who is modeled on CNN’s Nancy Grace.  There is also a second timeline – a narration by Amy from her diary as she describes how she met Nick, fell in love with him and the events that begin to drive them apart and at each others throats.

Like a modern day Rashomon, the audience is never quite sure of the reliability of what they’re seeing and being told.  Initially, both Nick and Amy seem nice enough and sincere in their version of events.  But then inconsistencies appear.  One person’s version of events contradicts the other.  Neither seem to be reliable narrators and both clearly have an agenda.  Who is telling the truth?  What exactly is going on?

The beauty of Gone Girl – both as a book and as a film – is that it is an ambitious work that has far greater depth and social commentary than your typical thriller.  On face value it is an entertaining, over the top mystery that will have the audience guessing until the very end.  It does however, also stir plenty of discussion about modern day gender relations and even finds time to take shots at how news media can manipulate criminal investigations amongst other things.

For me, the highlight of Gone Girl is Amy Dunne’s raging polemic against the ideal girlfriend that she believes the modern man wants and expects.  Amy’s Cool Girl speech becomes the driving force behind her rage and the motivation for her actions in the third act of the film:

“Men always say that as the defining compliment, don’t they? She’s a cool girl. Being the Cool Girl means I am a hot, brilliant, funny woman who adores football, poker, dirty jokes, and burping, who plays video games, drinks cheap beer, loves threesomes and anal sex, and jams hot dogs and hamburgers into her mouth like she’s hosting the world’s biggest culinary gang bang while somehow maintaining a size 2, because Cool Girls are above all hot. Hot and understanding. Cool Girls never get angry; they only smile in a chagrined, loving manner and let their men do whatever they want. Go ahead, shit on me, I don’t mind, I’m the Cool Girl.

Men actually think this girl exists. Maybe they’re fooled because so many women are willing to pretend to be this girl. For a long time Cool Girl offended me. I used to see men — friends, coworkers, strangers — giddy over these awful pretender women, and I’d want to sit these men down and calmly say: You are not dating a woman, you are dating a woman who has watched too many movies written by socially awkward men who’d like to believe that this kind of woman exists and might kiss them. I’d want to grab the poor guy by his lapels or messenger bag and say: The bitch doesn’t really love chili dogs that much — no one loves chili dogs that much! And the Cool Girls are even more pathetic: They’re not even pretending to be the woman they want to be, they’re pretending to be the woman a man wants them to be. Oh, and if you’re not a Cool Girl, I beg you not to believe that your man doesn’t want the Cool Girl. It may be a slightly different version — maybe he’s a vegetarian, so Cool Girl loves seitan and is great with dogs; or maybe he’s a hipster artist, so Cool Girl is a tattooed, bespectacled nerd who loves comics. There are variations to the window dressing, but believe me, he wants Cool Girl, who is basically the girl who likes every fucking thing he likes and doesn’t ever complain.”

I’ve seen some critics and bloggers wonder aloud whether Gone Girl is a film for misandrists as Amy seems to be the embodiment of a Men’s Rights Activist’s worst nightmares.  She fakes pregnancies, falsely accuses men of rape and gets her way with the media and police who completely give her the benefit of the doubt during her shakey testimony in the hospital.  Almost all of this takes place in the crazy third act where the Amy character shifts gears into what seems like an entirely different film altogether – a crazy grind house revenge picture.  Once Amy reveals to the audience that she alive and very much not kidnapped, she wholeheartedly rejects her previous ‘Cool Girl’ life and embraces her basest wants and desires.

Nick on the other hand is a horrible person who foolishly believes he’s the Good Guy.  Consider his track record: when his marriage becomes troubled he cheats on his wife with a young college girl.  He happily has input into how Amy’s trust fund money is spent but resents her when she tries to use it to help her parents.  On the other hand, he uses the money when his mother becomes terminally ill as a reason to move interstate and buy a bar for him and his sister to run.  He is verbally and physically abusive in a much more grounded and realistic fashion than Amy’s Hollywood violence that feels truer to what actual domestic violence can be like (he slams Amy’s head against a wall, fantasizes about smashing her head in etc).  In short, he is a terrible person who deserves everything he gets.

Does the film take sides?  Not really.  Gone Girl is like a morality tale about two awful people, one who embraces their id and another who successfully quashes it, and how they end up inextricably bound together for life.

Gone Girl is an erotic thriller that takes the Basic Instinct / Fatal Attraction template from twenty years ago and modernizes it for a 21st Century audience.  It is self aware and meta.  It is a weird amalgamation of several different genres and has a lot fun playing with well established character tropes and playing with audience expectations.  It is brought to life thanks to two very different performances – Ben Affleck’s discreetly slimey Nick Dunne and Rosamund Pike’s larger than life turn as the psychotic Amy.  The grinding musical score from Trent Reznor heightens the creep in some of the scenes to unbearable levels.  It’s a drama, a thriller and a dark comedy all rolled into one.  Sublime.

With his wife’s disappearance having become the focus of an intense media circus, a man sees the spotlight turned on him when it’s suspected that he may not be innocent.