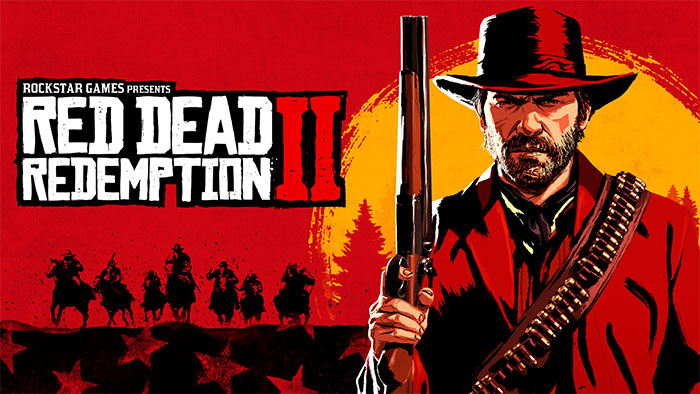 Red Dead Redemption 2 has finally arrived.  Rockstar Games’ long anticipated sequel to Red Dead Redemption is an epic in the truest sense of the word.  It has been eight years in the making.  It is rumoured to have cost over a quarter of a billion dollars to make and has over three thousand names in the credits.  The fruits of this labour is an enormously detailed open world environment the likes of which has never been seen before.  Even ignoring the hundreds of activities, side quests and hours of exploration you could do in Red Dead, the main story will take most players somewhere north of fifty hours to complete.  This thing is absolutely gargantuan.

The player takes on the role of Arthur Morgan, a lieutenant in Dutch Van Der Linde’s gang of outlaws.  Although Dutch’s gang are criminals who have robbed and killed scores of people, they follow an honour code that gives them a Robin Hood sort of sensibility.  They generally steal from the rich, mostly kill the worst of society and their caravan includes people of colour, migrants and outcast women.  Together these misfits are on the run from the law, moving from town to town, looking for the big score that will finally allow them to settle down permanently, away from the long arm of the law.

Red Dead Redemption 2 opens in the snowy mountain wilderness of Ambarino.  We learn that the gang has been forced to flee from the town of Blackwater after a heist went badly.  Desperate for money, the gang stage a dramatic heist of a train carrying the belongings of wealthy oil tycoon Leviticus Cornwall.  Enraged at this act, Cornwall hires the ruthless Pinkerton agency to track down Dutch and the gang.  This latest development in a string of bad fortune, has some members of the gang beginning to question Dutch’s judgement.  But Arthur Morgan, his ever reliable right hand man, remains faithful and resolute.  Dutch will see them out of this mess.  He always does. 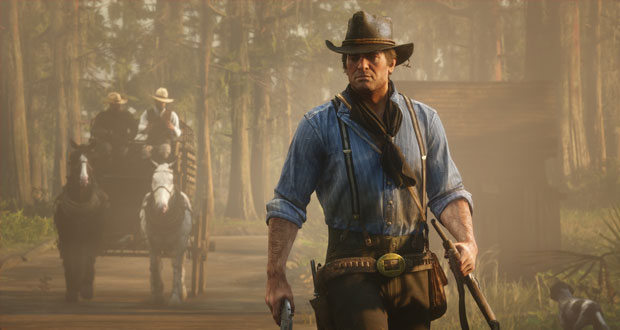 The first impressions of Red Dead Redemption 2 can be a little overwhelming.  There is a lot of detail to adsorb in this game.  The first two chapters basically serve as a tutorial, introducing the player to the various mechanics including combat, hunting, horse riding, bonding with your gang members and taking care of yourself.

The attention to detail is like nothing else.  Arthur Morgan will need to wear clothing that suits the climate, depending on whether its hot or cold.  He needs to shower and keep his hair and beard trimmed if he is to mingle with folk in town.  The game is populated with thousands of people and quite literally every single one of them can be conversed with.  It’s a mind boggling achievement in the pantheon of open world video games.

Occasionally, the amount of information Rockstar asks of the player in this onboarding process is a little much.  I think they do a poor job explaining how Arthur’s core stats work (relating to his weight, cardio and aiming).  The controls also seem needlessly obtuse.  The game might ask you to hit square to open a chest of drawers but then you tap triangle to close it.  Navigating the weapon and item menus also requires a strange claw-like combination of button presses where you hold down L1, tap R1 to shift between weapons and items, then use left and right on the dpad to choose your desired item.  It’s weird but you get used to it.

After a few hours, you begin to settle into the gameplay loop that Rockstar have set out for the player.  You typically begin and end each day at the camp site of your caravan.  Here you can relax and chat with your gang members and then set out for the day to either complete a mission or provide support for the camp in the form of providing food (via hunting or fishing) or financial aid (through gambling, robbery or about a dozen other means).  The world-building and sense of place that Rockstar have created in Red Dead Redemption 2 feels second to none as there is apparently thousands of lines of dialogue recorded (creative lead Dan Houser claims its 300,000) and so your gang members will chat to you each day about what you’ve done and give you their two cents worth.  If you’ve gone fishing, they’ll talk about fishing.  If you’ve robbed a stagecoach they’ll ask how it went.  Its insane how much time and work must have gone into this.  Not only is this dialogue context sensitive, there are even options that the player can use to be either friendly or antagonistic in their engagement so the conversation can play out in multiple ways.

I think one of the biggest accomplishments in Red Dead Redemption 2 is the sense of community Rockstar have created with life at the camp site in the company of nothing but NPCs.  Some nights the gang will decide to have a sing-along by the camp fire.  Other days you might walk past two of your gang members engaging in a heated conversation about the outcome of a recent heist.  The trick is that these moments just happen around you, feel totally organic and build your investment in the outcome of the narrative.  You want Arthur, Dutch and the gang to succeed because you really become attached to this likeable bunch of outcasts – Charles, Lenny, Abby, Tilly, Uncle, Josea.  They’re almost all great.  Almost all.

I was very much in awe of Red Dead Redemption 2 in those early chapters.  The production values are absolutely astounding.  The wide variety of different environments – the snowy mountain peaks, the arid desert, the dense forests, the foggy bayou – all look extremely impressive running on the Playstation 4 Pro.  Rockstar Studios are now well versed in creating convincing, cohesive open world environments and Red Dead is no exception.

Once the game loosens the reigns on the player and lets you begin exploring in Chapter 2, it really is a joy to just get out and immerse yourself in the world.  I quickly realized that a lot of the game’s systems – your hygiene, camp morale, bonding with your horse – are generally window dressing features that encourage role-playing life in the Wild West.  Nothing in the game will actually break if you decide to completely ignore these trimmings.  Its all there to provide the player with a sense of place.  When I made that discovery, I found even though they weren’t a necessity, I still enjoyed making time for Arthur to do these optional activities – fishing, gambling, singing around the camp fire – because I so enjoyed that feeling of immersion.

Once the player turns their focus towards the story, Red Dead Redemption 2 really begins to shine.  I think Grand Theft Auto IV was when the Houser Brothers really began to show off their aspirations to make a crime epic that could be compared to the best works of film and television.  Although I think they fell well short with GTA IV, Red Dead Redemption 2 is a damn sight closer to hitting the mark.  Arthur Morgan is one of the most interesting and well rounded protagonists that Rockstar have created and his story arc in Red Dead 2 feels like you’re watching a season of a well made tv show play out.  Arthur is a multi-faceted character who has his own qualities and short-comings.  He has complicated and distinctive relationships with a variety of men and women in the gang and these shift and evolve several times over the course of the story.

The writing for the other characters in the Van Der Linde gang is outstanding.  Although there are a lot of people in Dutch’s gang to keep track of initially, they quickly make an impression on you.  In previous games, Rockstar has generally gone all in on developing the lead character and then reduced the supporting cast to simple stereotypes and caricatures.  Not so with Red Dead Redemption 2.  Whether its the strained mentor/mentee relationship Arthur has with Dutch, or the brotherly affection he shares with John Marston, this game is full of fantastic, memorable characters.  Sean, Lenny, Uncle – even these bit part players in the story were a treat to travel around with.  No doubt one of the most popular figures in Red Dead 2 will be the sharp-shooting bad ass Sadie Adler.  I’m sure I won’t be alone in clamouring for Rockstar to make a game with her as a playable lead.

One of the high points of Red Dead Redemption 2 is that not only does Rockstar have the ambition to tell a meaningful tale with genuine emotional weight and grativas about it, we have arrived at a point with technology that these characters are able to communicate subtle, nuanced expressions to the player.  Just look at Arthur’s eyes as it begins to dawn on him the type of man that Dutch Van Der Linde is.  Or revisit a scene when John and Abigail Marsden exchange verbal spars about his choice to remain an outlaw.  We can see they have a heated but loving relationship not because they say so, but in their body language. 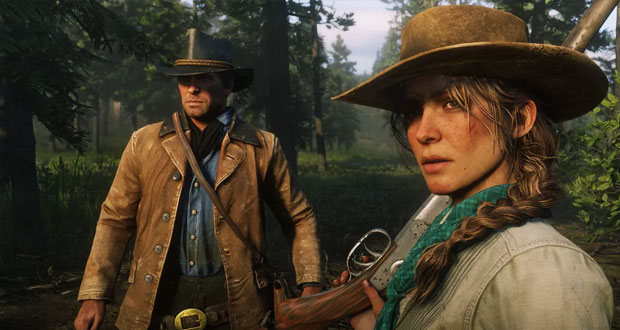 By virtue of its sheer size, scope and ambition, Red Dead Redemption 2 will challenge some players with design choices that will feel cumbersome or misguided.  One particularly divisive choice is to force Arthur to walk at a sedentary pace when in camp (and at some other key narrative moments).  This, along with a generally inconvenient fast travel option, is clearly Rockstar putting a firm hand on the player’s shoulder and ensuring they don’t zip through the game and miss the details in the environment which is essentially where the game shines brightest.  Whilst I admire the intent and it didn’t bother me for most of my time with Red Dead Redemption 2, when I arrived at the closing chapters of the game and quickly wanted to mop up some side quests, Arthur’s snail pace movement began to frustrate.

The other notable bug bear is Rockstar’s long standing method of delivering exposition.  As with the original Red Dead Redemption and the previous five Grand Theft Auto games, lots of missions involve a long journey to the quest marker during which the characters will talk endlessly to one another about the plot or maybe particular details about the current objective.  It wasn’t a particularly elegant solution when Grand Theft Auto: Vice City did it in 2002 and it feels positive archaic with Red Dead Redemption 2 in 2018.  Rockstar tries to make the best of it by adding a ‘cinematic mode’ camera option but this generally ends up being wide angle shots that capture the back of a stage coach and you don’t get to see any of the body language or facial expressions as the characters communicate significant information to one another.  Surely at this point, we would be better suited to simply have a cut scene that employs actual cinematography?  The actual ‘gameplay’ in these segments – which generally involves tapping or holding down ‘X’ – wouldn’t be missed at all.

But these are very minor foibles when examined in the broader context of what Red Dead Redemption 2 achieves.  When this game hits its highs, it is unmatched amongst its contemporaries.  Arthur is one of video gaming’s most brilliantly conceived protagonists and the grand adventure that he goes on – which explores themes of greed, corruption, family and of course redemption – is told to the player with a level of cinematic flair and sophistication that is finally beginning to rival its contemporaries in film and television.  Maybe this isn’t the video games industry’s Gone With The Wind but its not far off it.

Summary : One of the biggest and most ambitious video games ever made. It can be creaky at the seams but Red Dead Redemption 2 is an epic Western that largely delivers on its aspirations

Previous: The Final Empire by Brandon Sanderson
Next: Tetris Effect