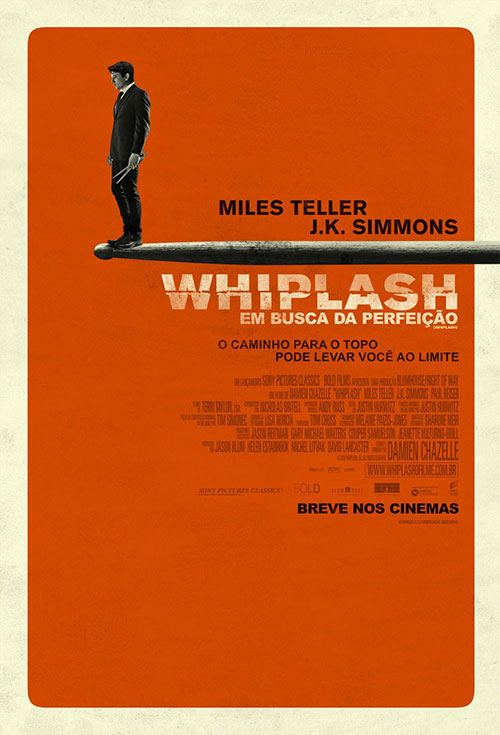 “That’s not quite my tempo”
– Terence Fletcher, jazz instructor

I love that line from Terence Fletcher, the no-nonsense music composer at the prestigious Shaffer Conservatory in New York.  I hope it becomes a part of pop culture parlance.  That’s not quite my tempo.  In the context of the film, it not only means you’re out of time with the sheet music, it means you’ve drawn the ire of the teacher and he’s seconds away from flying into an explosive rage.

Whiplash is the superb second film by little known writer/director Damien Chazelle about Andrew Neiman, a prodigious drumming talent.  He enters the Shaffer Conservatory, hoping to crack into the studio band and one day make his name as one of the great jazz musicians, alongside the likes of Buddy Rich and Charlie Parker.

The studio band is run by the terrifying and bullish Terence Fletcher, although no one in the film has earned the right to call him by his first name.  Fletcher is an imposing presence who rules his studio with an iron fist, imposing his will on his subjects by demanding an impossible level of perfection in their performance.  Heaven help you if you hear him say ‘that’s not quite my tempo.’

Fletcher first happens upon Neiman when he is practising in the conservatory and within seconds he has a profound affect on the young man.  Fletcher is rude and dismissive but dangles just enough of an interest in Neiman’s talents as a drummer that it consumes him as he tries to win his teacher’s approval.  Fletcher invites Neiman to be a back up drummer for the studio band.  “Be here tomorrow morning at 6 a.m sharp!” says Fletcher.  Neiman complies and the next day he sits in the studio for three miserable hours by himself until the session starts…at 9 a.m.  Let the mind games begin. 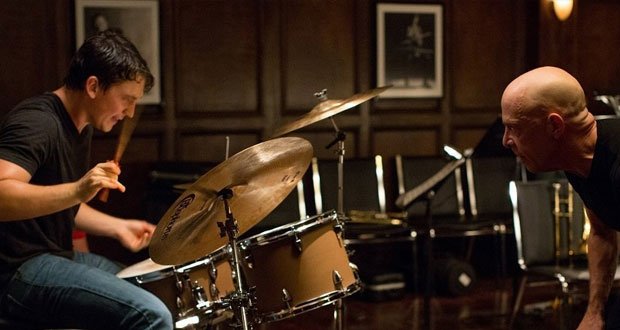 Whiplash is a study on greatness, both the pursuit of it and what its worth sacrificing for.  Neiman, played by Miles Teller in a breakout performance, seems like a nice young man at the start of the film who has a healthy ambition and plenty of wide eyed optimism.  When he is first invited to join the studio band, he is high on confidence and asks the girl at his local cineplex (Melissa Benoiste) out on a date.  Later, he decides that she is an unnecessary distraction on his path to greatness and he dumps her unceremoniously and without any pleasantries.

J.K Simmons is a force of nature as Fletcher and brings a nerve-racking tension to every scene he appears in.  Simmons has made his name in Hollywood as an excellent character actor but finally he has a role that allows him to really show off his acting chops as he booms, bellows and manipulates his students, in his never ending search for greatness.  When he sees Neiman rise to the challenge – competing with two other candidates for the lead drummer role until 2 a.m; practising until his hands bleed – Fletcher realizes he may have at long last found the jazz prodigy he’s been looking for.  He gives it his damnedest to push Neiman to breaking point, believing he will either help him attain his full potential or reveal him to be a pretender whose best wasn’t good enough.

It’s easy to draw parallels between Whiplash and films about professional sport.  It shares similar narrative themes with its mentor and pupil storyline and plenty of the same tropes – an obsession with discipline, training montages and macho posturing about the pursuit of excellence.

There are individual scenes in the film that I thought were perfect showcases for the talents of Teller and Simmons as they spar with one another verbally and musically.  The power dynamic between the two shifts constantly as Neiman lurches between approval seeking submission and white hot rage when he feels slighted by Fletcher.  For his part, Fletcher seems to be playing Neiman and keeping him off guard, switching between hard nosed and unforgiving task master and a conciliatory mentor who believes tough love is the only way to rise above mediocrity.  It’s not clear for most of Whiplash what Fletcher’s true intentions are.

Whiplash shifts gears in the third act and after a taut spell of tension and gamesmanship, the closing chapter moves into the realm of the fantastical.  It’s likely that this change in tone might lose some of the audience who find the narrative developments a little too convenient and a strain on their credulity.  It’s all done to set the stage for a final scene where Neiman and Fletcher push one another to a bloody, spell binding and breath taking conclusion.  I think its quite a risky direction to take the film but one that pays off handsomely.  It’s a final act that builds upon all of the pressure of the preceding ninety minutes and builds to an incredible crescendo of snares, cymbals and sweat.  When the closing credits finally popped, I realized I had been holding my breath.  It’s quite the finale.

Who knew a film about jazz could be quite so visceral?  The whiplash in the film’s title refers to an oft played Hank Levy tune in the film but it also aptly describes the feeling of the viewer at the end of a riveting tale about a master and his apprentice.

Summary : A fantastic showcase for Simmons and Teller who both look like a million bucks as the mentor and student pushing each other to breaking point.

Previous: The Theory Of Everything
Next: The Imitation Game