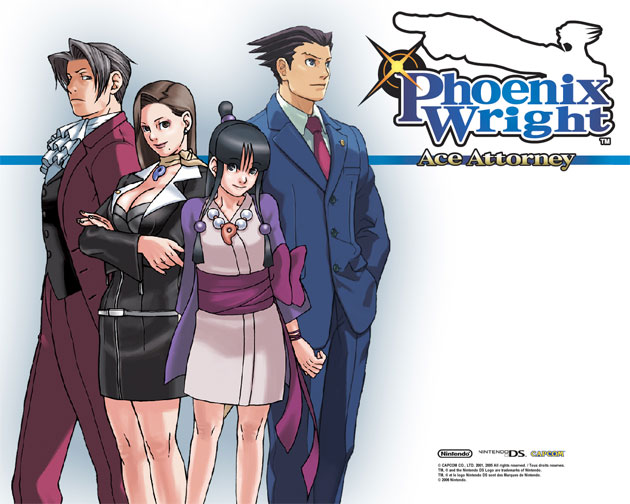 It’s long been a lament of gamers that since Lucas Arts wound down the production of their point and click adventure games in the Nineties, there has been a distinct lack of video games comedies.  Of course its nice to have a greater variety of genres but the other reason that its a sore point is that the video game community and a lot of gameplay conventions seem so perfect for satire (see: The Simpsons Game which has completely run of the mill gameplay but is still enjoyable for its riffs on gaming cliches and memes).

It’s maybe no surprise that Capcom’s Phoenix Wright franchise is finding quite a following on the DS as it quite nicely fills a niche that, depending on your fancy, is the perfect game for anyone starved of comedy, pulp murder mysteries and cheesy court-room drama.  Phoenix Wright is a game that is uniquely Japanese and while that tag could carry negative connotations for the writing quality in other genres, it is something to celebrate here.

On paper, the setting sounds like Phoenix Wright should be a dry and serious game.  You play the eponymous defence attorney defending clients against murder charges in five different cases.  However, Capcom have stuffed each case full of over-the-top characters that bring the game to life.  No imagination is spared and there is a memorable cast including a down-on-his luck detective, a l33t-speaking film director, a cranky geriatric security guard, a flamboyant rival prosecutor who wear puffy sleeves and of course Phoenix himself.

Part of what makes Phoenix Wright‘s humour work so well is the art direction.  The characters are expressed through only a small palette of animations, most of which are typically just two or three frames.  This minimalist approach evokes animated gifs and emoticons on the Internet and coupled with the expressive illustrations give the characters a charm that really is unique to video games.

Being a Gameboy Advance port, Phoenix Wright doesn’t fully utilise the Nintendo DS’s functionality, save for a specially created final case, but it doesn’t really matter.  In games such as this, the quality of the story and characters is king.  And in this capacity, Phoenix Wright: Ace Attorney really excels.  Easily my favourite DS title.

The original and best

Summary : One of the most charismatic, charming and funny games ever made. Phoenix has more charisma in one of his 3-frame animations than most games do in their entirety.

Previous: The Host
Next: Sunshine