This blog was taken from a week where The FAT Website staff were blogging as someone else.  This is Dan blogging as Rod.

As I was musing through the mysteries of existence and endeavouring to answer the questions that incessantly plagued my weary mind, it occurred to me to forego such pedantic matters and that an update for the hideously mudane web-created fiend that is the FAT website was de rigueur. In which case the task given to me was to emulate the style of another member of this website, namely Rod. A fair endeavour, if I may say so, but one that didn*t come with its challenges, like most things in life. Indeed, living would be utterly ineffectual if there were no challenges that accompanied every second of your existence. How would our species progress otherwise, develop the savoir-faire that be an adjunct to evolution? To grumble at such challenges is to display laziness and a lack of drive to self-improve. But humankind, unfortunately, is unable to rise above the morass that is habitual custom. That goes for all of you. Yes, you, on the site. I sure am glad that I bring the intelligence level up a notch, if only that. It*s a hideous thing about the law of averages, that the more people there are, the less that each individual can contribute to the group as a whole. Speaking of which, it is a frightening thing to know that three E*s in your *A* levels puts you in the top 4% of the population of UK. That*s four percent. It*s quite shocking to learn just how incredibly obtuse and unintelligent most of the world*s population is. I shouldn’t grumble. It is not so much a terrible thing as having everybody the same intelligence level as you are. At least people like me have the chance to feel superior in every way. Look at me, I’ve become an academic. Many a time I am still at school several hours after the others have left, which is where I find the time to muse on the philosophies of life. As well as to read Kip’s site. The others are just intolerable. E/N is intolerable. The juvenile depictions of the activities of everyday life just does not make for a gripping read, I’m afraid. The ever-incessant “Look at me, look at me, don’t I just have an interesting life?” does get on one’s nerves after a while. Unless [and this is a rare, rare case] the webmaster happens to be a gifted writer. Like Kip and Chrome and a few others that I could count with the thumbs of one hand. You know, fatigue is a strange thing. Many medical scientists have classed it as the depletion of the body’s energy, which needs to be replenished periodically through slumber. Yet there are others who have defied this by staying up days at a time, especially through times of great stress, such as war. There was a famous colonel [his name has slipped from my memory] who lived on whiskey through a five day seige without going to sleep. He simply drew sustenance from the alcohol, which gave him the energy to last that long without replenishment. I personally believe it’s mind over matter. If you believe that you are tired, then most likely your body will react to mirror your mindset. It can be a dangerous thing sometimes. There have been times where I have been suddenly rejuvenated from my weariness through a sudden change in situation, or hope of a new development, after going through 30 hours of no sleep. There have also been times where I have felt utterly tired and need of sleep an hour from waking from a 16-hour hybernation. Or it could just be that my sleeping patterns are severely out of schedule. Schedule. How do you prounounce schedule? The Yanks, with their annoying habit of taking everything literally, only focusing on what’s obvious and exaggerated [take their humour for example. And that’s H-U-M-O-U-R] would pronounce it skedule. The British [and derivatives] would pronounce it shedule, as it was originally intended to be. That’s right. The ‘c’ in the spelling doubles as an ‘s’ sound. But who cares? This isn’t school [even though I spend more time in the damned hell-place than I do at home]. I am quite famished. I am in need of sustenance. Therefore, I will end this pointless discussion and allow you to fall back upon your oh-so ordinary and unsophisticated lives. Philistines. Ingrates.

PS I hope no one was too intimidated by the length. It would seriously suck if noone took the time and effort to read through this. And Annie, no I don’t miss you, but I’m sure Rod does.

Tagged with: blog as someone else

Dan lives in Australia and spends too much time on the computer. 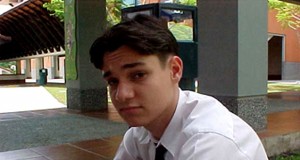