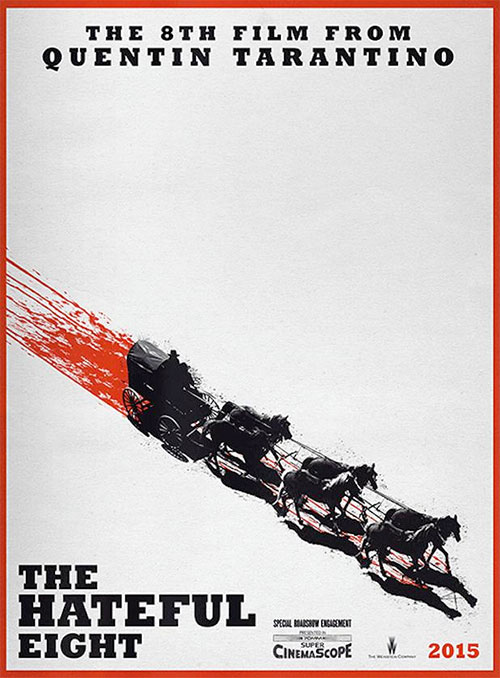 During a thick snowstorm on the outskirts of Red Rock, a stagecoach seeks refuge at a lodge called Minnie’s Haberdashery.  The passenger inside is John “The Hangman” Ruth (Kurt Russell), a bounty hunter who is cuffed to his prize captive Daisy Domergue (Jennifer Jason Leigh), a murderer who’s worth ten thousand dollars when she’s brought to justice at the Red Rock prison.

Accompanying John Ruth are two stranded men who he picked up along the way.  Major Marquis Warren (Samuel L Jackson), an anti-Confederate war hero turned bounty hunter who has murdered scores of Southerners and has a price on his head.  Sitting rather uncomfortably across from him is Chris Mannix, a Southerner himself who is on his way to become the new sheriff of Red Rock.

At the lodge, Minnie and her partner Sweet Dave are nowhere to be found.  But the lodge does have occupants.  Mexican Bob (Demian Bichir) is running the joint in Minnie’s absence and he has a handful of lodgers who have also sought shelter from the snowstorm.  Oswaldo Mobray (Tim Roth), the effete English hangman of Red Rock.  Joe Gage (Michael Madsen), a gravelly voiced cowboy who claims he’s enroute to visit his mother for Christmas.  And General Sandy Smithers (Bruce Dern), a frail retired army general resting in front of the fireplace next to a chessboard.

They are the Hateful Eight. 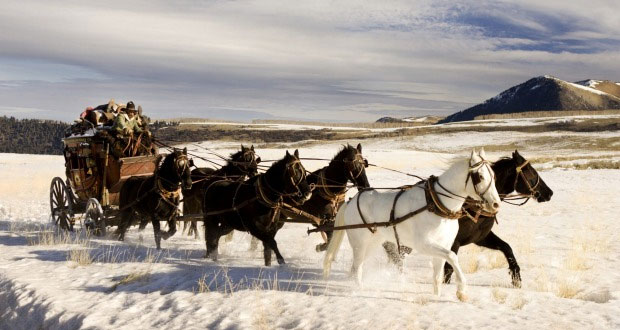 In a break from the pacing of his recent films, The Hateful Eight starts off good and slow with a stage coach ride that takes nearly half an hour.  It’s worth it.  It sows the seeds of distrust and paranoia that exists between each Hateful character.  There is a myriad of alliances and animosities based on the Civil War, the prejudices each person carries with them and the responsibilities required of their occupations.  Part of the fun in the second half of the film is watching the evolution of the alliances that unfold as secrets and revelations about who the Hateful Eight are are slowly unveiled.

It’s John Ford meets Agatha Christie’s And Then There Were None shot through the prism of a Seventies exploitation film.

There’s a lot of talking in The Hateful Eight.  Like, a lot.  There was plenty of excitement during the film’s production about Quentin Tarantino shooting the film in 70mm and while the exterior shots do indeed look spectacular, the vast majority of the film’s 167 minute running time takes place in the cavernous Minnie’s Haberdashery.  In that respect it almost feels like a companion piece to his debut feature Reservoir Dogs.  It is one of the most theatrical Tarantino films in years and its the blistering jaw-jacking between each of these formidable personalities that takes centre stage.  Each man or woman has a barely contained hatred for someone else in the lodge.  The catalyst for the paranoia is Daisy Domegue who is worth a lot of money for whoever brings her to justice but John Ruth is positive that she has an ally in the room who is plotting to set her free.  And during a memorably lurid and grotesque monologue by Marquis Warren, an unseen hand poisons a coffee pot to enact that escape plan.

Just what exactly is The Hateful Eight?  The Civil War trappings and itchy trigger fingers made me think I was walking in to see a Western but the film is devoid of the most familiar tropes of the genre.  It sort of frames itself as a murder mystery for a time but the culprit is unveiled almost immediately after the crime is committed.  Really, its sort of an elaborate uniquely Tarantino pantomime.  Each performance is delivered with the volume turned up to eleven.  The characters are preposterous and the dialogue is gleefully profane.  Whether its Tim Roth giving us his best Colonel Mustard impersonation or Michael Madsen trying to outgravel the gravelliest voice he can muster, the whole thing is played out with a bit of a wink and nod to the audience. 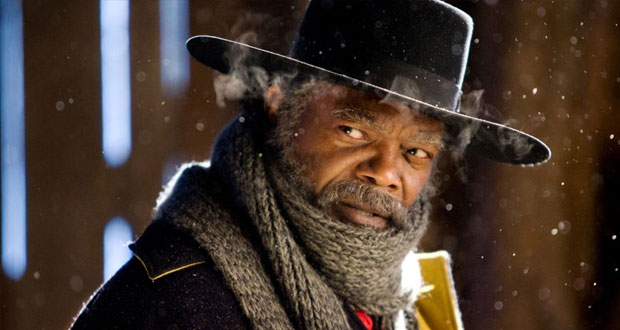 Tarantino is clearly thumbing his nose at his detractors, poking and prodding with the racially charged language and over the top violence.  For instance, the physical violence inflicted upon Daisy is played for laughs like a modern day Punch and Judy.  Its probably one of the most divisive aspects of the film.

There’s a strange dichotomy at work here.  The film is populated almost exclusively with irredeemably scummy and awful characters but the tone of The Hateful Eight is weirdly high spirited and frequently comedic.  Marquis Warren is positioned as the film’s protagonist and most sympathetic character and yet we know he is a mass murderer and possibly (probably?) a rapist.

Race relations.  Gender politics.  Gun violence.  The Hateful Eight has all these elements in spades.  Tarantino’s cavalier approach to it all is seemingly to throw his hands up in the air and say ‘fuck it, let’s have fun’.  It is infused with the same spirit as South Park creators Trey Parker and Matt Stone’s most pointed and anarchic productions. 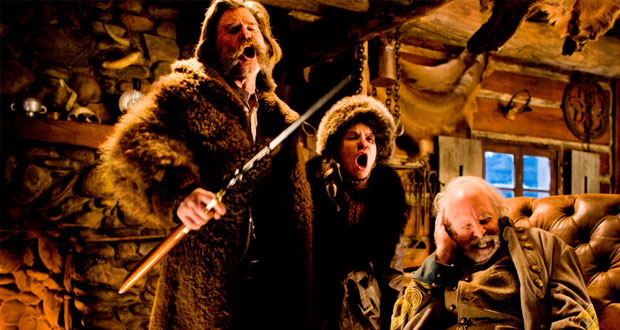 The Hateful Eight is loaded with terrific performances but perhaps none moreso than Samuel L Jackson as Marquis Warren.  Samuel L Jackson and Quentin Tarantino have a long history of working together, dating back to Jackson’s memorable performance as Jules Winnfield in Pulp Fiction.  Jackson is often reduced to playing a caricature of that performance nowadays but Tarantino has been able to restore much of the ferocity and sharp-witted barbs that made it such a landmark performance.  When his character has his back up against the wall, Jackson delivers some fantastic monologues.  Tarantino films are famous for their lengthy monologues and Jackson is one of the best actors at bringing that ambling, storytelling style to the screen in a captivating fashion.

Another Tarantino staple is that his films often grant a fresh opportunity in the spotlight to forgotten film stars and in that regard, he doesn’t disappoint with The Hateful Eight.  It’s fantastic to see the likes of Kurt Russell and Jennifer Jason Leigh given significant roles in this feature and even the bit part Hateful characters such as Bruce Dern and Tim Roth are given time to shine.  If anyone is given a Travolta-esque career revival after this film, I hope it is Russell.  His turn as the gruff, blow hard John Ruth was one of the many highlights of the film.

As the title credits remind us, The Hateful Eight is Quentin Tarantino’s eighth film and he has never been more self assured or indulgent as a director.  For those who were on the fence about his earlier films, that indulgence (the running time, the violence, the monologues) may have become too much.  For me, I still love Tarantino’s style and excess.  I found The Hateful Eight to be riveting entertainment and was completely invested in the fortunes of these eight foul mouthed, morally bankrupt scoundrels from start to finish.

In the dead of a Wyoming winter, a bounty hunter and his prisoner find shelter in a cabin currently inhabited by a collection of nefarious characters.

Previous: Joy
Next: The Prognosticator 2016 Checklist