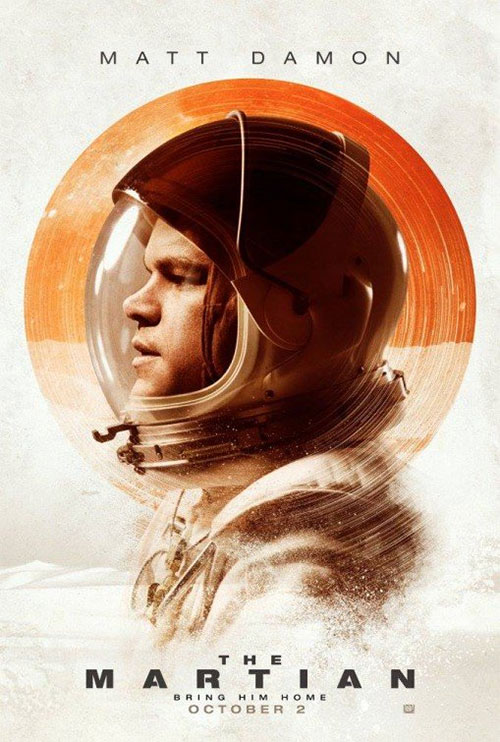 At 79 years young, the evergreen British director has made one of his most entertaining and creative films yet.  The Martian (based on a book by Andy Weir and screenplay by Drew Goddard) is a fantastic survival story in the spirit of Castaway or Robinson Crusoe.  I was going to say there is nothing quite like it but then the auto-prompt on IMDB reminded me that someone made Robinson Crusoe On Mars.

I listened to an interview with author Andy Weir on Neil deGrasse Tyson’s Star Talk show in which he spoke of how Tyson’s passion and public advocacy of astrophysics inspired him to write the story.  As a son of a particle physicist and a computer engineer in his own right, Weir penned The Martian to be as realistic as possible and based on actual technology currently used by NASA.  Effectively, it is a love letter to astronauts and scientists for the work they do.

This approach gives the film a unique voice and a significantly different tone to, say, Gravity, another space survival film that made waves when it released in 2013.  In Gravity, Ryan Stone has the better part of a day to get from Earth’s orbit to a landing zone on the planet’s surface.  For Mark Watney in The Martian, he has to get home from Mars and survive for over 400 days while he waits for his ride to arrive.  Talk about upping the stakes. 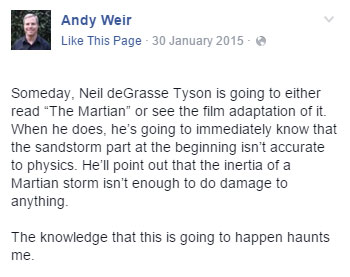 The role of the stranded astronaut and botanist Mark Watney is played by Matt Damon.  He is the perfect candidate for the part.  Watney is intelligent, dry witted and self-deprecating.  This is Matt Damon’s bread and butter.  He did after all, make his name in Good Will Hunting.

The set up for Watney’s predicament is that he is part of a crewed mission to Mars lead by Melissa Lewis (Jessica Chastain) and the Ares IV team.  A dust storm hits the team moments before they are due to leave the Red Planet’s surface during which Watney is wiped out by some flying debris and mistakenly presumed to be dead when his vital sign readings stop registering.  When the storm subsides, Ares IV is headed back to Earth and Watney awakens on Mars, alone and abandoned.

Watney has a moment to take in his predicament and then springs into action, determined to survive at all costs.  It seems like an impossible task.  He has no way of letting NASA know that he is alive and he is rapidly running out of food and oxygen.  I like what happens next.  There isn’t a scene where Watney curses the heavens in or races against time staring at a countdown clock with a digital display.  Instead, he assesses his situation, hypothesizes a solution and then resolves to ‘science the shit out of this.’

For food, Watney creates his own farm using a leftover stash of potatoes from a Thanksgiving meal and the toilet waste from the Ares IV crew.  He creates a supply of breathable air by extracting hydrogen from leftover rocket fuel which is then oxidized by burning.

Watney’s activities at the base station are noticed by NASA.  Realizing that he is alive and in need of rescue, NASA director Teddy Sanders (Jeff Daniels) and mission director Vincent Kapoor begin to strategize how to safely bring him home.  The scenes at NASA are a necessarily part of the story but are the most conventional and weakest part of The Martian.  Daniels plays Teddy Sanders like a million other bureaucratic busy-bodies that you’ve seen in every other movie.  It is thanks to the ingenuity of some unsung heroes at the “JPL” science lab that they are able to devise a plan.  One of the film’s most gloriously optimistic scenes is a coming together of space agencies in America and China to share resources and manpower to help bring Watney home.  If the film is going to ‘cheat’ in any way to help the story along, I don’t mind it being the diplomacy of two rival nation states who in real life would never work this way. 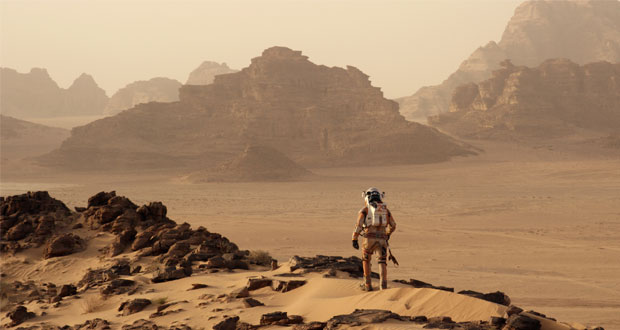 The Martian is a film with a relatively straight forward and predictable narrative trajectory but of course it is the cleverness of the details that make it shine.  It’s interesting to not only see how Watney tackles his mountain of challenges but also seeing it in execution.  Care and attention is even paid to issues such as how Watney struggles to alleviate his boredom.  He curses the mission commander for her lousy taste in music which has left Watney with a laptop that only has Seventies disco hits on it for him to listen to.

The Martian is a smartly written, optimistic and funny sci-fi film.  It is a film that does justice to Andy Weir’s original aspirations when he wrote the book and it has translated superbly well onto the silver screen.  The secret to the film’s success is that purposefully steers clear of the bombast and spectacle of films such as Armageddon and Gravity, choosing instead to emphasize mundane pragmatism.  By steering clear of tired genre tropes, The Martian feel fresh, creative and innovative.

During a crewed mission to Mars, astronaut Mark Watney accidentally gets left behind.

Summary : An engaging and unique survival story that is like no other.

Previous: Room
Next: Youtube Friday: Highlights from the 2008 Presidential Primaries 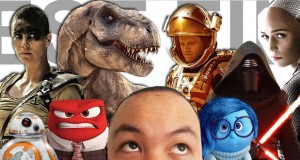 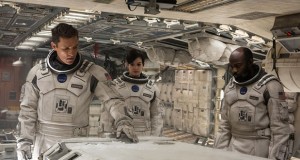