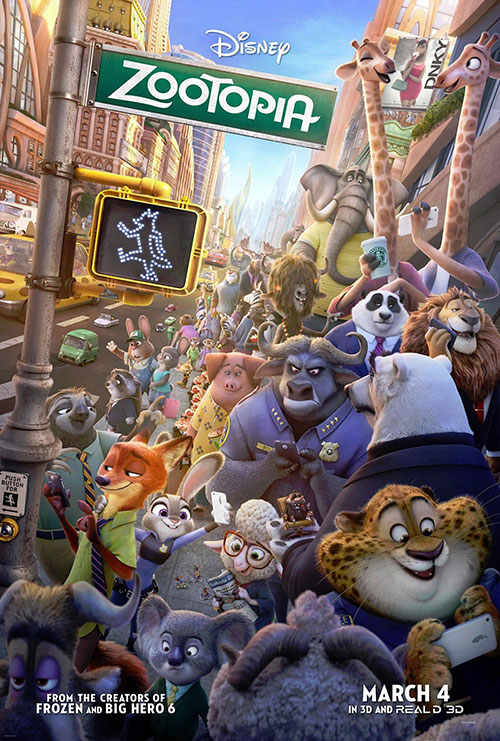 A couple of years ago, Walt Disney Pictures produced a film set in the neon-lit, futuristic city of San Fransokyo – a high tech wonderland that seemed like the perfect backdrop to tell an imaginative tale.  Unfortunately, Big Hero 6 squandered that potential by telling a disappointingly conventional and paint-by-numbers story that didn’t take full of advantage of its inspired setting.

Fast forward two years and this time the studio has nailed it.  Once again Disney have conjured up a fascinating setting, but this time they’ve got a terrific story to boot.  Zootopia (or Zootropolis depending on where you’re from) is set in a world filled with anthropomorphic mammals who have collectively evolved as a society to suppress their natural instincts as predators and prey.  Although not explicitly stated in the film, the creators revealed in an interview that they envisioned Zootopia as a world free of human influence, which explains the absence of any domesticated creatures like cats and dogs.  Instead the world of Zootopia is populated with the likes of rabbits, foxes, cheetahs, rhinos, polar bears, koalas and perhaps most memorably, sloths.

Judy Hopps is an ambitious rabbit.  She is raised by well meaning, conservative parents who hope she sticks with her kind and lives out her life on the farm, carrying on a family tradition.  But Judy is a starry eyed do-gooder who has dreams of becoming the first rabbit police officer, a job typically fulfilled by enourmous predators.  Completing her training at the academy is no mean feat as her diminutive size and second guessing from her peers are obstacles she must overcome.  But Judy is earnest, spirited and unshakable in chasing her dream.  She completes her qualifications and soon she is headed for the big smoke – Zootopia! – where she will start a new life as an officer of the law.

Judy is tested from the very first day.  She is constantly belittled and overlooked.  Her commanding officer – a water buffalo named Chief Bogo – tells her plainly that he has no faith in her.  During the morning briefing, he explains that there is mounting pressure on the police force to solve the case of the missing Mr Otterton, the most recent victim in a spate of disappearances, all of whom are animals of prey.  The polices have few suspects and fewer leads.

Judy is excluded from the case and is assigned meter maid duty.  This disheartening development distances her from the case but it leads to her crossing paths with the street smart hustler known as Nick Wilde.  Wilde is a jaded, world weary fox who keeps his cards close to his chest and is the perfect foil to the naive and blindly optimistic Judy.  Of course, one thing leads to another and soon the two are working the case of the missing mammals together. 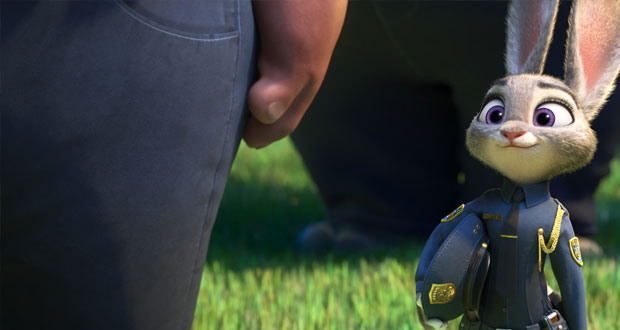 I liked Zootopia a lot.  The anthropomorphic cast and its noire trappings reminded me of the delightful French comic book series Blacksad.  This particular blend of genre and art style presents fresh ground for a mainstream animated film to broach and the tale of a gumshoe investigating a missing persons case – the basic framework of Phillip Marlowe’s classic The Big Sleep – is a path that’s ripe with potential.  The great thing is that Walt Disney Pictures deliver on that promise and really hit it out of the park where it counts.  This is a film that is populated with likeable characters who develop their characters over the course of the story.  It has a cracking mystery at the centre of its tale.  Best of all, it is consistently funny throughout and full of interesting observations about the unique world that the characters inhabit.

As you may have already ascertained, this an all ages Disney film that is surprisingly on the nose about being an allegory for race relations.  When Judy says “only rabbits can call each other cute” and Nick advises her “never let them see that they get to you”, its made pretty plain that Zootopia isn’t really about rabbits and foxes looking for otters.  That the film should so directly address its messaging at the minority, the disenfranchised and the other is both noble and laudable.  To see journalists on Murdoch’s payroll piss and moan that Disney have the temerity to tell morality tales about tolerance is proof in the pudding of Zootopia‘s fine work.  Like Paddington before it (a film that preaches acceptance and tolerance towards immigrants), this is the perfect sneaky film to pass onto the kids of your racist uncle.

Zootopia is wildly creative, filled with great gags and has an inspired message at its core.  For the longest time, Pixar have been the gold standard for producing quality animated films.  Last year showed that they still have that capability – see Inside Out – but they have also faltered at times, as with their latest release, the inexplicably bland The Good Dinosaur.  Walt Disney Pictures on the other hand have been tracking more hits than misses.  Tangled, Frozen and Zootopia all point to a studio really hitting their stride.  I’ll be surprised if there’s a better animated film this year.

In a city of anthropomorphic animals, a rookie bunny cop and a cynical con artist fox must work together to uncover a conspiracy.

Summary : An entertaining and creative tale from Walt Disney Pictures. Zootopia is imaginative, funny and a resounding success.