The eighth instalment of the Rugby World Cup is currently taking place.  The tournament is being hosted by England and is being contested by 20 countries.  The defending champions are the All Blacks.  The competition runs from September 18th to October 31st.

Rugby is a sport in decline in Australia.  It is no longer a part of the cultural landscape of the country as it was fifteen years ago when George Gregan and John Eales lead the side.  I don’t think most people would be able to tell you who our current captain is (it’s Dean Mumm) and if it wasn’t for Japan beating the Springboks, I don’t think most people would know the Rugby World Cup is on.  The Wallabies haven’t been competitive against their trans Tasman rivals the All Blacks for almost a decade and the country doesn’t have a domestic competition to draw people into the sport.  Australia’s only bona fide star today is Israel Folau who originally made his name playing rugby league and it wouldn’t surprise me if he switched codes again in the future ala Sonny Bill Williams and went back to league.  With that said, this is a tournament drawing little interest and low expectations in Australia.

Personally, my own interest in the sport is close to an all time low also.  I grew up as an All Blacks fan in New Zealand but I ended up switching sides and supporting the Wallabies because I find it difficult to get excited about a team that wins all the time.  The All Blacks have a 90% winning record against the Wallabies in the last ten years.  They haven’t been beaten by Ireland or Scotland in over a century of competition.  If competition on the international stage is a dead horse, it’s not much better with Super Rugby – the competition that pits teams from Australia, New Zealand and South Africa against one another.  For a league that has been running for nearly two decades it is stunning how there aren’t any rivalries to stir the passions of supporters.  Most Kiwis I know will swap support to another New Zealand team if their home town side is knocked out.  Most Aussies I know don’t even watch Super Rugby.  There is no showcase match up that has the intensity of State of Origin, the storied history of Carlton/Collingwood or the atmosphere of a Sydney vs WSW derby.

I don’t really know what the solution is to ‘fix’ rugby in Australia.  It’s a tough road back.  The Wallabies winning more matches would probably go a long way to attracting new supporters but most talented young footy players would likely pursue a career in AFL or rugby league instead.  Having a domestic competition wouldn’t hurt.  The game definitely needs a charismatic player that can transcend the sport in the way that Eales and co. did in the early 2000s.  The sporting landscape is very crowded in Australia and right now there isn’t really a compelling reason for people to tune in.  The Wallabies would need to turn in a sensational performance in this tournament to arrest that slide. 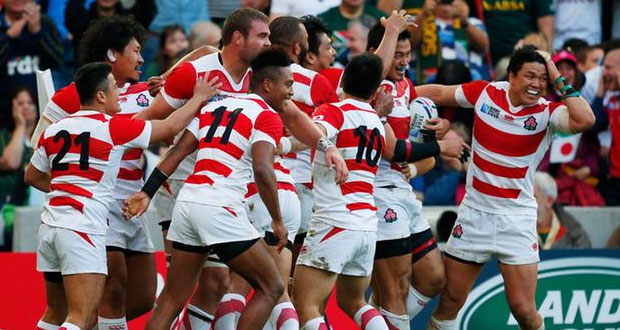 I don’t much care for the 20 team format for the Rugby World Cup.  There are too many minnows that are making up the numbers who get absolutely thumped.  Not unlike the Cricket World Cup earlier this year which saw a record number of wins by a margin of over 100 runs, the Group Stage for this World Cup has already had over seven matches with one side winning by 20+ points.  I think they should dial back the number of teams to sixteen.  Lets not forget, until last weekend, Japan – the 13th seeded team in the competition – hadn’t won a World Cup game in twenty five years.  Imagine how rough it’ll be for the teams seeded 14th to 20th.

Having said that, the group stage for RWC 2015 has definitely delivered the goods with two absolutely classic games with Wales beating England in Twickenham and of course Japan scoring the biggest upset in World Cup history beating former champs South Africa 34-32.  Considering the quality of their squad, Japan played as close to a perfect game as they possibly could and they covered themselves in glory in the 84th minute when they scored a try after the final whistle.  The decision to chase the win rather than settle for a draw when they were awarded a penalty in front of the posts at 32-29 down will go down as part of the legend.  The roar of the crowd when the winning try is scored and subsequent footage where the supporters lose their minds with excitement and the commentators says nothing at all still gives me goosebumps.

34-32, what a way to spend your holiday! pic.twitter.com/mlKfSiLGEZ

Wales’ dramatic come from behind victory over England ensures Group A will live up to its billing as the ‘Group of Death’ as hosts England face the very real prospect of getting eliminated early.  Both Wales and England are yet to face Australia who have been incredibly patchy with their form.  It’s anyones guess which two teams will advance.  I’m guessing Australia and Wales.

South Africa’s surprise defeat to Japan means that Scotland have a very real chance at topping the table in Group B which is cool as hell.  I can’t remember the last time Scotland topped anything.  They crushed Japan 45-10 three days after their famous win over the Springboks.  The Cherry Blossoms will be battered and bruised but hopefully they have it in them to earn at least one more victory before going home.  South Africa and Scotland will advance.

Group C is kind of silly really.  The All Blacks could probably field a third or fourth string squad and still win comfortably.  Argentina aren’t expected to have much competition for the second qualifying berth either.

Group D is kind of hard to pick.  Three of the Six Nations teams – Ireland, France and Italy – are all in the mix and on their day, any of these teams can get the best of the other.  You would expect Ireland and France to qualify, right?  We shall see.

Previous: The Cuckoo’s Calling by Robert Galbraithe
Next: A-League Season 11 Preview and Predictions