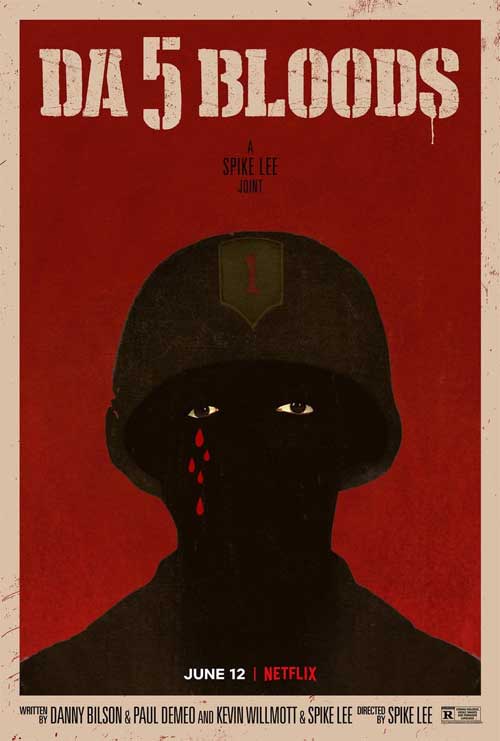 When it comes to Spike Lee, I am extremely late to the appreciation party.

Although I had seen some of his work over the years (Summer of Sam, 25th Hour, Inside Man) it took me much longer than I should’ve to see his most renowned work such as Do the Right Thing, Malcolm X and Jungle Fever.  Roger Ebert was singing his praises decades ago but only recently did I finally catch on and catch up.

It wasn’t until 2018’s BlacKkKlansman, my favourite film of that year and for my money the best film about the origins of Trumpism, that I became a genuine Spike Lee fan and began to actively seek out both his new work and back catalogue.  I’ve really come to appreciate Lee’s unique voice and perspective in Hollywood and even in his sixties he infuses his films with a creative energy that I really admire.  Even the lesser known Lee films are an enjoyable watch, as they have a distinctive style and flair that draws me in.

Da 5 Bloods is his latest production.  A sprawling 155 minute war drama about African-American Vietnam war vets – the “Bloods” – returning to Ho Chi Minh in modern day to pay tribute to their fallen leader Norman and to recover the cargo of a fallen CIA airplane which had onboard millions of dollars worth of gold bars which was intended to be payment to locals who were fighting the Viet Cong.  The Bloods return to claim the gold for themselves but they have their work cut out as napalm strikes during the war have wiped out any identifying landmarks for the cargo’s location.

The Bloods arrive in Ho Chi Minh when a landslide uncovers part of the crashed plane.  Otis reunites with his Vietnamese mistress Tien who reveals to him that they had a son together.  Tien also puts the Bloods in touch with a wealthy French businessman Desroche who agrees to help the Bloods smuggle the gold out of Vietnam should they successfully recover it. 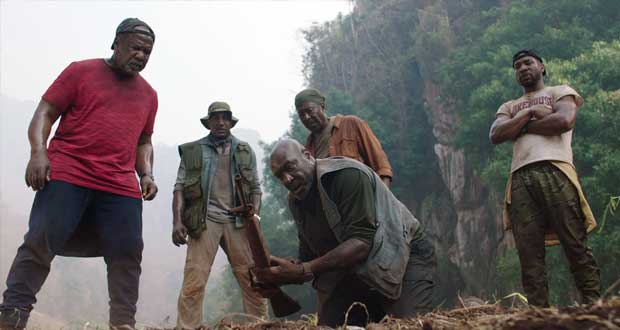 What follows is a fascinating and memorable melodrama as the Bloods venture into the jungle to reclaim their prize.  Da 5 Bloods is a film that defies genre conventions and pigeon-holing.  It explore a multitude of themes and offers plenty of social and political commentary too.

The lush and colourful locales reminds us that this is Lee’s most expensive and expansive production ever.  The banter and comradery between the Bloods as they reflect on their lives back home is an insightful look at how different African Americans engage with Donald Trump, Black Lives Matter and race relations in modern America.

The first half of the film does a fine job in establishing the bonds of friendships between the Bloods and then the hunt for the gold in the second half threatens to tear it all apart.  Da 5 Bloods is a modern day Treasure of the Sierra Madre (the classic Humphrey Bogart gold rush movie that I recall was on Spike Lee’s long list of his favourite films) and when the Bloods sense they are close to finding the gold, jealousy, greed and heated disagreements over how the money should be distributed threatens to spoil the entire expedition.

Spike Lee is a bold and innovative director and I was stunned by many of the stylistic choices he makes in this film.  There are abrupt moments of incredible body-horror violence and brutality that veer the film into horror-comedy territory.  When Lee employs the use of flashbacks to the Vietnam war, he takes the most literal and economical approach to shooting these scenes by using the modern day actors (mostly in their fifties and sixties) and getting them to act out as their teenage counterparts, with no make up, special effects or nothing.  I fully appreciate that Lee’s wild west approach to film making will lose some people but personally I really connected with it.  He happily switches gears and lets Da 5 Bloods play out as a drama, a political allegory, an action movie and whatever else he sees fit.

Delory Lindo is the star of the film with his larger than life performance as Paul and Netflix are rightly putting him forward in the upcoming award season as the lead.  The rest of the cast is absolutely solid too and its a strange and cruel twist of fate seeing the late Chadwick Boseman play the deceased Bloods leader Norman who we only see in flashbacks.

Da 5 Bloods is one of the wildest films I’ve seen this year.  It has plenty to say, has many memorable scenes (the landmines, holy shit!) and comes at you with a mad, passionate energy that is distinctily and uniquely Spike Lee.  One of my favourites of 2020.2

Four African American vets battle the forces of man and nature when they return to Vietnam seeking the remains of their fallen squad leader and the gold fortune he helped them hide.

Summary : Bold, inventive and provocative film making. One of my favourites of 2020.

Previous: The Last of Us Part II
Next: Ghosts of Tsushima