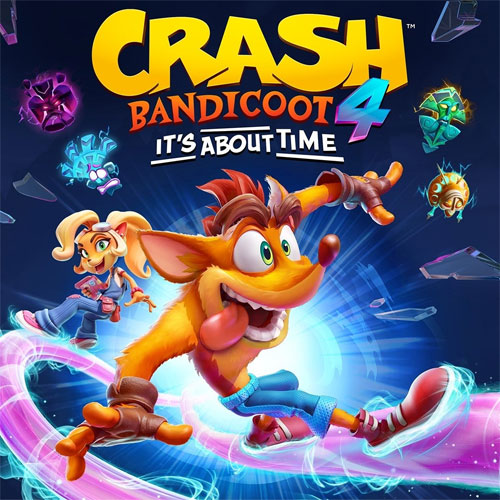 Crash Bandicoot 4: It’s About Time, as the double meaning in the title playfully implies, has been a long time coming.  The Crash series was a mainstay of the original Playstation console in the Nineties and was both a critical and commercial hit.  At the height of the series’ popularity, for a brief moment in time, the Crash games were genuinely as popular as their Super Mario Bros counterparts.

As times changed, interest in the platform genre waned and cartoon mascots were set aside as the industry (and Sony in particular) shifted their focus towards attracting an older market.  The Crash franchise changed hands and was passed onto Activision who released a handful of titles to an increasingly indifferent audience.  But despite the Crash Bandicoot name having faded for the better part of two decades, nostalgia is a powerful force and there was always a sense that the audience would return if the series returned to its roots (see also: Tomb Raider, Tony Hawk etc).  That hunch proved true with the Crash Bandicoot N.Sane Trilogy of 2017, a budget priced remaster of the original trilogy that gave Crash a makeover with some modern graphics but otherwise kept the gameplay and original level design intact.

The game quickly hit the bestseller charts and that lead to Activision hastily green-lighting a Spyro the Dragon remastered trilogy, a Crash Team Racing remaster and ultimately, Crash Bandicoot 4, the first numbered sequel to the original games in 22 years. 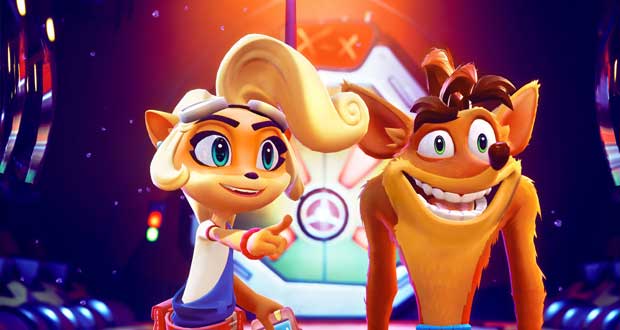 Although the N.Sane trilogy was handled by developer Vicarious Visions, Toys for Bob were responsible for the well received Spyro trilogy so there was a feeling that the new Crash game was in safe hands.  The developers were making all the right noises about their creative decision-making process for the first modern Crash game in a long time.  Make sure it handles like the old games.  Bring back the cast of beloved supporting characters.  Provide lots of colourful costumes and bonus levels but don’t charge an extra cent for them.

The end result?  A game that has some incredible highs – the stunning visuals, the new Quantum mask powerups, ambitious level design – and also some unexpected missteps.  This isn’t quite the world-beating, revolutionary return of Crash Bandicoot that I hoped for.  What’s frustrating is that it gets close at times, but a design brief that seems hell bent on punishing the player at every opportunity threatens to spoil the party. 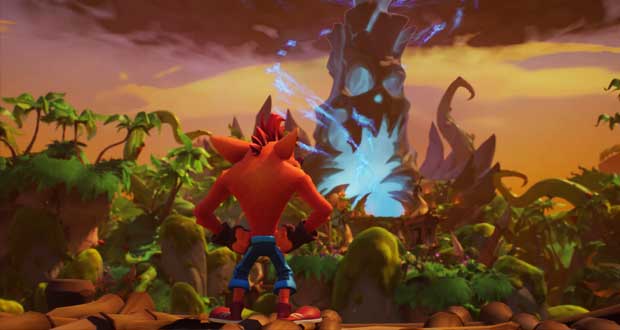 Crash 4 makes a very positive first impression.  It goes without saying that this is the best the series has ever looked.  The art style is eye-catching and smartly constructed; the high production values poured into the animation, soundtrack and cut-scenes vividly bring the series to life like an interactive Saturday morning cartoon.  It’s the most elaborate storytelling that the series has ever had but its still short, sharp and punchy and gets you right into the action.  Crash and Coco are tasked with collecting Quantum masks in a time travelling adventure that sees them form alliances with old acquaintances and even some old foes.

Once players get their hands on Crash and begin navigating the first level, there’s a sense of relief that the controls feel tight, responsive and instantly familiar.  As the game unfolds, the player begins to acquire new Quantum masks that each add a fresh wrinkle to the gameplay – the ability to soar over long distances, flipping gravity upside down, slowing down time and teleporting objects in and out.  The later levels mix and match a variety of these unique effects making the game more complicated and demanding than any previous Crash.  It’s a welcome introduction that adds depth and sense of freshness to the proceedings.  The game has a robust line-up of forty stages (a big jump up from the original trilogy that average twenty-something levels) so to keep players on their toes, Toys for Bob have also introduced Tawna, Dingodile and Neo Cortex (!) as playable characters who each handle quite differently.  Tawna has a grappling hook and can do wall-jumps.  Dingodile carries a vaccuum with him that can suck up objects.  Neo Cortex can air-dash and shoot a laser that converts enemies into platforms.  And if all that wasn’t enough, there are also bonus stages called Flashback tapes and N.Verted levels – monochrome mirror image copies of the main levels.  It’s so much content that at times, it threatens to overwhelm you.  Phew!

It sounds amazing – but there’s a catch.  A pretty big one, if I’m honest.  Somewhere in the design brief for Crash 4, its apparent that the Toys for Bob developers decided that this game should play to the audience that enjoyed not only beating the Crash Bandicoot N.Sane Trilogy, but also enjoyed tracking down every last crate, hidden gem and speed run objective.  The presentation of the game makes very clear that completing the level from A to B is only half the job.  They want you to do all that other stuff too.  And if you don’t, you can forget about unlocking any costumes or seeing the ‘true ending’ to the game.

The problem is, Crash 4 is punishingly difficult.  Frequently unreasonably so.  The game has some of the longest levels I’ve ever experienced in a mainstream platformer and the checkpoints are few and far between.  For the masochists trying to track down every crate to smash, many of the levels feature over TWO HUNDRED, often with a handful of them hidden out of sight.  Miss just a single one and you get nada.

The developers are seemingly aware that they’ve made “the Dark Souls of platformers” so they’ve given players the option to play the game in “modern mode” where you can have an infinite number of lives.  If you keep dying in a particular area, you are eventually gifted uka uka masks and even new checkpoints.  But the frustrating thing is that the majority of deaths are usually because Crash or Coco has fallen to their deaths so the extra masks don’t do shit.  And the eventual unlocking of new checkpoints (after you’ve died 10+ times) feels like they’re adding markers that should’ve been there in the first place and at this stage you’re basically brute-forcing your way through the level through a war of attrition.  You don’t feel much sense of accomplishment when you’ve got past a tricky part of a level through sheer bloody-mindedness and muscle memory.  And remember – for the overwhelming majority of people who play this game – they’re looking to rekindle a fond memory of a game from their childhood.  I don’t really know if it’s the best idea to make a final stage so goddamn brutal that the Games Radar guy who played the review code died 258 times on it.

This miserly and nihilistic attitude to gameplay regularly threatens to fuck up what should be some of the high points of the game.  One of the most attention-grabbing and lavish stages you experience early in the game is in a level called Off Beat, where you play through a New Orleans themed dimension complete with toe-tapping jazz numbers and visually extravagant trappings that I’ve never seen in a platformer before.  But the level is hard as nails and I suspect it’ll take most people 10-15 lives and a (way too long) 20 minutes or so to beat.  Think of some of the great showpiece levels in other platformers of recent years, like the Donkey Kong homage in Mario Odyssey’s Metro City or when the orchestral score begins to soar in Mario Galaxy’s Gusty Garden.  Then imagine how ruinous it would be to the experience if they added a difficulty spike that made you repeat sections of those levels over and over.  Sometimes, a developer needs to know when to step back and let the player enjoy the spectacle.  In Crash 4, you are basically never afforded that luxury.

Creating challenging but achievable obstacles in gaming is a tricky business.  If you get it right, you have the next Super Meat Boy/Spelunky/Impossible Lair on your hands.  Get it wrong and you have, well, this.  I know people who enjoyed platinuming the Crash Bandicoot N.Sane Trilogy who aren’t even bothering to attempt it with Crash 4.  I wonder how many players who aren’t platforming die-hards will be able to get to the end of the game, let alone finish that brutal final stage Cortex Castle.

For me personally, I managed to finish the game but have no inclination to do much more with it.  The game has moments of brilliance but it is also exhausting.  I’m glad I managed to beat that utter bastard of a final stage but I’m done.  I can’t fault Toys for Bob for the amount of ambition they have shown with this game and the polish it has is second to none.  But holy cow, if they get around to Crash 5, my advice: tone it down a notch.  2020 has been rough on all of us as it is.

When the evil N.Tropy opens a rift in the fabric of space, Crash, Coco and their friends must unite to save the Quantum masks and restore order to the multiverse.

Summary : Crash 4 is ambitious, innovative and bursting at the seams with content. It is also likely to be way too difficult for most people hoping to beat all the challenges it has to offer.