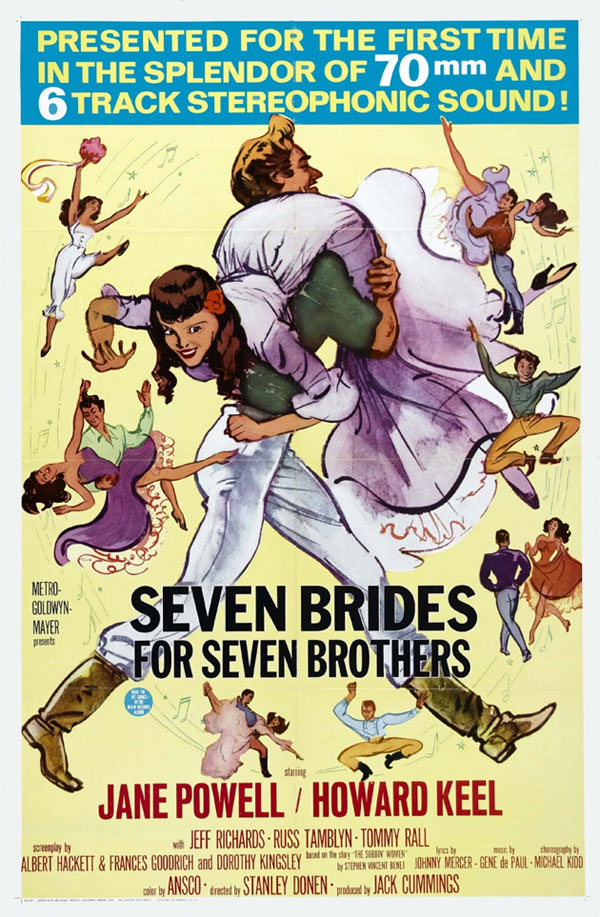 Adam Pontipee is a big, hairy backwater woodsman who is in need of a wife.  Life is tough on the ranch and he needs a tough woman to keep the house, tend to the livestock and keep him company on those cold winter nights.  Oh, she also needs to keep his six brothers Benjamin, Caleb, Daniel, Ephraim, Frank and Gideon in line too.

He finds such a wife in Milly, a beautiful but bold woman played by Jane Powell.  Adam and Milly only get to know one another for mere hours (maybe minutes?) when Adam convinces her to marry him.  He carefully neglects to mention the six live-in brothers until she arrives at the cabin.  They are rowdy, smelly and unwashed.  Prone to breaking out into huge brawls at a moments notice.  They also consume food like hogs at a trough.  Upset at this turn of events, Milly sends Adam away to sleep in a tree (!) on the night of their honeymoon.  Eventually the two reconcile and Milly decides to take control of her destiny and teach the six brothers etiquette and social mores.  With a bit of training in courtship and line dancing, the brothers hope to find wives for themselves.

Thats pretty much Seven Brides For Seven Brothers in a nutshell.  It was based on a short story “The Sobbin’ Women” by Stephen Benet which itself was influenced by a Roman legend about Sabine Women.  The Sobbin’/Sabine women become an integral plot point to how the brothers become inspired to find a partner.  To my surprise, Seven Brides has no roots in Broadway although you can be sure it inspired plenty of stage productions since.

I recently wrote a review of The Man Who Shot Liberty Valance where I commended The Duke’s stoic and understated performance.  I love Seven Brides For Seven Brothers for precisely the opposite reason.  Everyone here, from Howard Keel to Jane Powell to every brother and bride really gives an enourmously animated and bombastic performance.  They belt out show tunes with gusto, dance like no ones watching and brawl with the showmanship of a seasoned pro wrestler.

There is a wonderful kinetic energy to this film thanks to the massive cast all performing like they’ve had five cups of coffee.  Consider the county fair scene where the brothers enter a competition to build the framework of a house quicker than their rivals.  They are under strict instruction from Milly not to get into a brawl but after one too many cheap shots from their competitors, things descend into a literal barnyard brawl.  There is a choreographed mayhem to this scene.  Bodies go flying, people dash up ladders, jump off the rafters and wail on each other in a scene of total technicolor chaos.  It’s a complete mess but purposefully so.  I love that scene.

The humour in this film stands up well.  The Pontipee Brothers outrageous slovenliness is timeless in its hilarity and if anything, some of their cruder behavior towards women come across even more politically incorrect and outrageous today.  Misunderstanding Milly’s urging to learn from the Bible, the brothers hatch a plot to literally kidnap their potential brides as the Romans did to the Sabine women.  The Pontipees are well intentioned but their execution leaves a lot to be desired.

And of course any musical worth its salt has good song and dance numbers and Seven Brides has them in spades.  The opening number Bless Your Beautiful Hide, sung in a booming baritone voice by Howard Keel, is easily my favourite but Goin’ Courtin’, June Bride and Sobbin’ Women are all pretty great too.

Seven Brides for Seven Brothers is one of the most raucously fun-loving, funny and cheerful films that I’ve seen.  I defy anyone to watch this film and not break out into a smile or start tapping their toes.  Bless their beautiful hides indeed.

When a backwoodsman brings a wife home to his farm, his six brothers decide that they want to get married too.

Summary : Stanley Donen's musical is gloriously chaotic, silly and full of song and dance. A film that never fails to leave me happier than when I started watching. 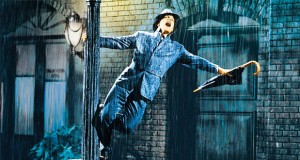 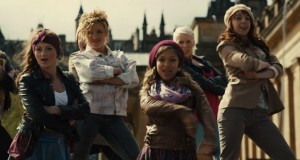