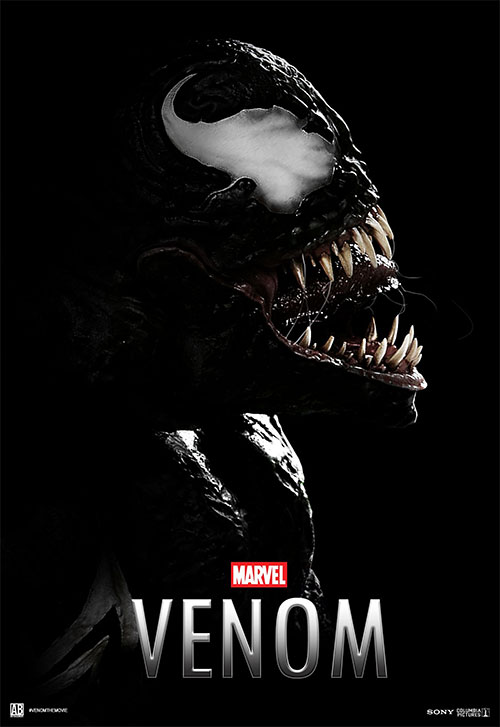 It’s been eleven long years since Sam Raimi’s Spider-man 3 which gave us the underwhelming and all-too-brief cinematic debut of Venom.  Eleven years!  But here we are in 2018 and at last Eddie Brock and his symbiote alter ego finally have their own movie.

Venom is one of those characters that fans have been clamouring for years to receive a proper big-screen treatment because, well, look at him.  He’s a giant, splotchy, psychopathic counterpart to Spider-man thats all spikey teeth and tongue.  He is one of the most iconic comic book antiheroes ever created.

It’s worth noting that Venom is a Sony Pictures production so, for now, it exists wholy outside the Marvel Cinematic Universe.  There’s no Iron Man, Spider-man or any other MCU mainstay making an appearance here.

Tom Hardy plays Eddie Brock, an ambitious but reckless journalist who wants to uncover whats going on at the bio-engineering firm Life Foundation, run by the charistmatic Carlton Drake (Riz Ahmed).  Life Foundation sends an exploratory probe into outer space which returns with four alien symbiotes – strange shapeless intergalactic parasites that must absorb living creatures to survive.  The host body they consume is then granted superhuman powers but it also gradually erodes their organs.

When Eddie Brock sneaks into the Life Foundation laboratory to find out what they’re up to, he is consumed by one of the symbiotes and is transformed into the deranged antihero Venom. 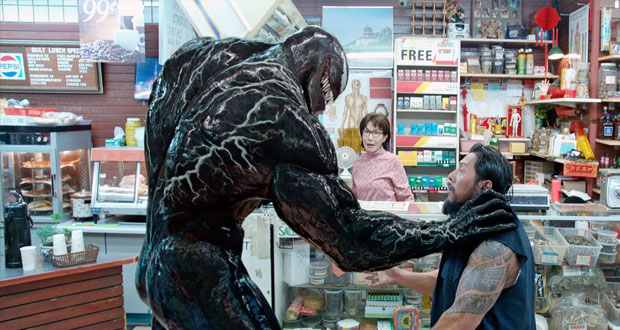 Venom is a weird film.  It was given a frosty reception by film critics but resonated favourably with audiences to the tune of nearly $800 million at the box office and very positive word of mouth.  I’m not really surprised that many critics didn’t know what to make of it.  Its a shambolic mish-mash of genres, a horror-comedy super hero movie that feels like it was produced in the Nineties.  It has really hammy one liners (“So many snacks, so little time!”), a bizarre supporting cast of shopkeepers, homeless people and chihuahuas, and wraps up with Eminem playing over the credits.  I felt like it had a similar vibe to, I dunno, Demolition Man or something?

Venom is incredibly rough around the edges and its worth noting that the strange pacing and jarring tonal shifts that occur from one scene to the next can probably be explained by an interview Tom Hardy gave where he said roughly 40 minutes of material was cut from the film and some of his favourite scenes ended up on the cutting room floor.

With that said, Venom is absolutely one of those films where its charm comes from its jankiness.  Tom Hardy delivers one of those ‘Nicholas Cage gone wild’ performances as Eddie Brock and gives it his all.  He screams at no one in particular, mutters and argues with himself and absolutely goes to town on a bunch of hapless two bit crooks who have the misfortunes of getting in his way.  For fans who want the Venom treatment, you’re gonna get it.  The long slimey tongue, the biting off of the heads, the whole works.

I laughed a lot throughout this film.  I actually have no idea which scenes where intended to be funny and which weren’t.  But it doesn’t really matter does it?  As long as you’re enjoying yourself, who cares?  All you need to know is that Venom is a ton of fun and at ninety minutes, it doesn’t overstay its welcome.

Venom‘s ridiculous box office numbers mean that sequels are assured.  The post-credits scene cuts straight to the chase and tells us that Venom 2 will recreate one of the most popular comic book storylines from the Nineties with his most notorious rival.  I cannot wait.

When Eddie Brock acquires the powers of a symbiote, he will have to release his alter-ego “Venom” to save his life.

Summary : An entertaining horror/comedy adaptation of Venom that is worth watching for Tom Hardy's performance