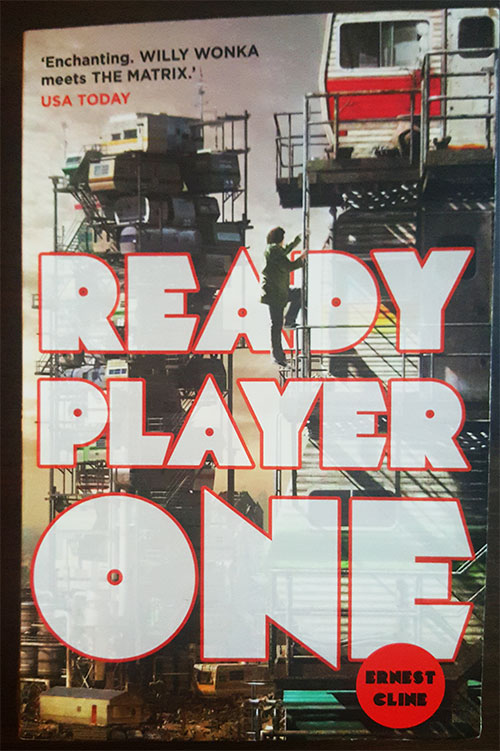 “Everyone my age remembers where they were and what they were doing when they heard about the contest.”

I don’t know who made it but I love the illustration on the cover of Ready Player One which shows the protagonist Wade Owen Watts scaling the scaffolding around a tower of mobile homes.  I think it does a wonderful job of setting the scene for this sci-fi adventure about a world so bleak that people have retreated into the confines of virtual reality to enjoy life in an online universe instead.

They’re not just retreating into any old online environment.  They’re connecting into OASIS, a gigantic virtual entity that began as an MMO (massively multiplayer online game) created by the eccentric James Halliday.  OASIS becomes so popular and so integrated into the lives of everyday citizens that it becomes ubiquitous with every day living the way that Facebook has.  When Halliday dies, he leaves behind a video that announces a global treasure hunt that every OASIS user is invited to play.  For the winner, the prize is the inheritance of Halliday’s vast fortune.  As an enthusiast of Eighties and Nineties pop culture, Halliday has hidden the prized Easter Egg behind a series of riddles that require savant-like knowledge of arcade video games, Dungeons & Dragons, John Hughes movies and so on.

There are three keys to discover, each of which lead to a gate where a task must be completed to progress any further.  For years, no one is successful in interpreting the clue to the first key.  But as our story begins, Wade Owen Watts (using the avatar handle ‘Parzival’) unlocks the very first key.  This sets off an excited flurry of activity from other devoted Easter egg hunters (‘gunters’ for short) and also draws the attention of Nolan Sorrento, a villainous officer of Innovation Online Industries (IOI), a multi-national corporation that has designs on claiming the Easter Egg and taking over the OASIS system. 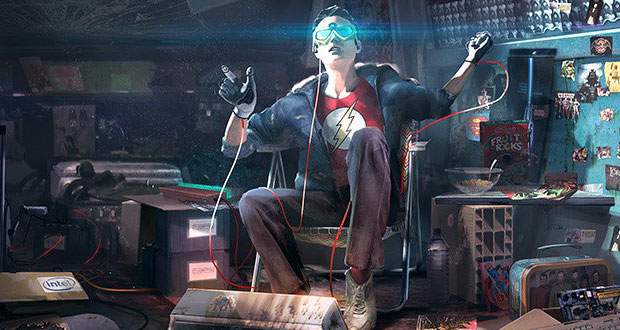 Ready Player One is a story that is cobbled together entirely out of borrowed references from other movies and books.  The main character Parzival talks about nothing but tv shows, movies and video games, in the same way that Patrick Bateman talks obsessively about his sound system and beauty products in American Psycho.  The narrative is deeply entrenched in pop culture minutae and the backbone of the plot itself borrows heavily from the likes of Charlie and the Chocolate Factory and Ender’s Game.  The whole enterprise reminds me of sample albums made by The Avalanches or Girl Talk.

The embarrassing thing I have to admit is that I wasn’t ever entirely sure if I was in on the joke.  Parzival is a strange guy.  He is awkward, he is obsessive compulsive and the “heroic journey” that he embarks on is almost entirely experienced in virtual reality as he sits on his couch in his tiny, makeshift apartment.  Parzival leads a group of like-minded players and at one stage he develops a crush on one of them – a girl named Art3mis – and the whole thing is kind of ridiculous because he’s never met her and knows next to nothing about her.  The book labours the point – no one is necessarily who they claim to be online.

So…is Ready Player One supposed to be taken at face value or is it a satirical take on Internet culture?  Are we supposed to think of Parzival as a heroic saviour of this online community or are we supposed to laugh at how seriously he takes this virtual environment which doesn’t really matter in a futuristic world where everything has gone to shit?

I was never quite sure if Ernest Cline was ridiculing his characters or championing them.  Because it certainly feels like it could be interpreted both ways.

In a case of life imitating art, this story of a pop culture nerd who obsesses over movies of the Eighties has been optioned by a major Hollywood studio and is being made into a film…by Steven Spielberg.  I’m curious to see what sort of tone Spielberg strikes with the film because I never felt quite sure what Cline was going for.