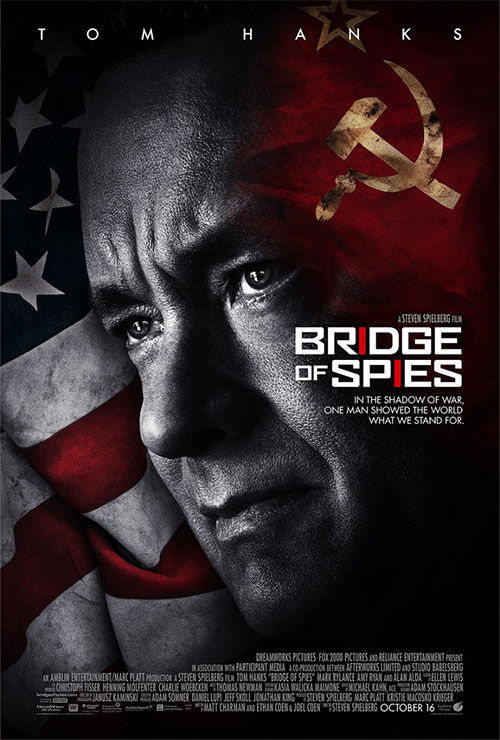 Bridge of Spies begins with a quiet, bespectacled man painting a self portrait.  He is a picture of calm.  Even when his apartment is raided soon after by CIA agents who arrest him and tip his apartment upside down looking for evidence that he is a Soviet spy, he remains nonplussed.  Three times in the film he is asked ‘are you nervous?’ to which he replies blankly ‘would it help?’

That man is Rudolph Abel and Bridge of Spies is the true story of his prosecution and subsequent involvement in a prisoner exchange in East Germany during the Cold War.

When Abel is arrested and refuses to divulge any information about his activities, the government has nothing left for it but to put him through a speedy trial and then sentence him to hang.  The public demand nothing less.  But to ensure that the trial isn’t seen as a kangaroo court, they call upon the services of accomplished insurance lawyer James B Donovan to act as his defence attorney.  We first meet Donovan as he is negotiating the payout for an accident involving a car that struck five bikes.  He launches an impassioned defence but draws a line between himself and his client.  “You keep saying he’s my guy.  He’s not my guy.”  This sense of identity – who is ‘our guy’ and who isn’t – takes on great significance later on in the film.

Donovan is most definitely Our Guy.  He’s a virtuous, patriotic everyman cut from the same cloth as Henry Fonda’s character in 12 Angry Men or Jimmy Stewart in Mr Smith Goes To Washington.  An idealistic and indefatigable moralist who gives the government more than they bargained for when they recruit him to defend Abel.  Despite the cynicism, cronyism and corruption around him, he carries on undeterred, staying true to his values.

Although he is asked to play a part in a show trial, Donovan decides to defend Abel in earnest.  He does it a little too well.  He calls into question the evidence used in court, discovering that it was seized unconstitutionally.  Despite all that, an exasperated judge reprimands him repeatedly and the jury finds Abel guilty on all counts anyway.  Still not finished, Donovan convinces the judge to ignore the public demand for capital punishment.  Imprisoning Abel is important on two counts.  Firstly, it shows the moral character of America as a nation, that they would not execute a man who is doing his job and how they treat prisoners of war.  Secondly, Abel becomes a useful political bargaining chip, should it ever need to be called upon.  The first line of reasoning is most important to Donovan.  The second line of reasoning is to convince the judge.

Unsurprisingly, Donovan’s proposal turns out to be a prescient one as Francis Gary Powers, a CIA recruit flying a spy plane over Russian air space is shot down and captured.  Impressed with his tenacity and smarts shown during the trial, the CIA recruit Donovan to negotiate a prisoner transfer with the Soviets, using East Germany as the swap point.  Thus the stage is set for the rest of the film. 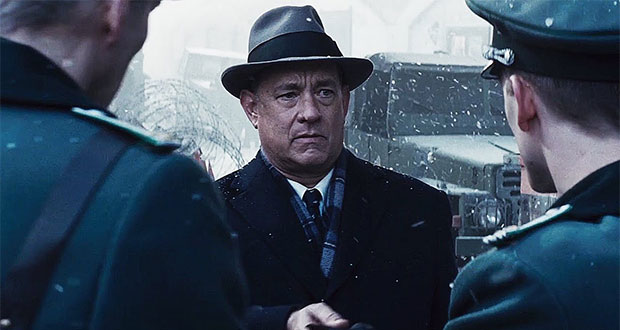 Bridge of Spies is a fine, impeccably put together spy thriller.  It artfully lays out all of the trappings that your mind would conjure up when you think of the genre.  There’s men in trench coats and hats tailing one another, exchanging briefcases and walking briskly beneath lamp posts in a dark stormy night.  There’s shady CIA operatives and humourless Soviet military men.  It’s marvellous stuff.

For the uninitiated, Bridge of Spies is the collaborative efforts of a Hollywood ‘dream team’.  It is directed by Steven Spielberg and co-written by the Coen Brothers.  The result is a film that shines brightly with the signature qualities of each of these film makers.

Spielberg’s fingerprints are all over Bridge of Spies.  James B Donovan is the sort of everyday hero that Spielberg has been making films about his entire career.  The visual metaphor juxtaposing the Berlin Wall with a neighbourhood in New York City.  Donovan’s sermon to the CIA agent about what makes someone American.  These are classic Spielberg devices.

But the characters talk in a distinctive and affected manner.  “He’s not my guy.  You keep saying he’s my guy.”  They repeat themselves.  “Shouldn’t you be nervous?  Would it help?”  They negotiate in rapid fire exchanges.  “We get Powers and Pryor”  “Forget Pryor! We only need Powers”  They talk like characters ripped straight out of Fargo or Miller’s Crossing or O Brother Where Art Thou?  They are indisputably Coen Brothers characters.

I never really entertained the idea of a film that melds Spielberg and the Coen Brothers but as it turns out, it’s produced something quite wonderful.

Central to Bridge of Spies’ themes about national identity and a man’s duty to his country is the relationship between Donovan and Abel.  Both men have their quirks and don’t seem to quite fit in amongst their own people but they understand one another just fine.  Donovan values loyalty, integrity and respect.  He doesn’t necessarily get that from the CIA agents, the judge or the other government lackies that he works with but he gets it from Abel.  Abel for his part seems genuinely moved by Donovan’s actions but he is incapable of emoting beyond the level of softly spoken appreciation.  Both men are masters at the art of persuasion and even in dire situations, always appear to be on the cusp of getting the upper hand.

Where the two men differ is their appreciation for time.  Abel seems to have all the time in the world.  Donovan cannot wait to get out of the cold and home to his bed.  By the end of the film, he earns his rest.

Summary : A handsomely put together spy thriller with Hanks, Spielberg, Rylance and the Coens each showcasing what makes them so talented.