Yooka Laylee and the Impossible Lair 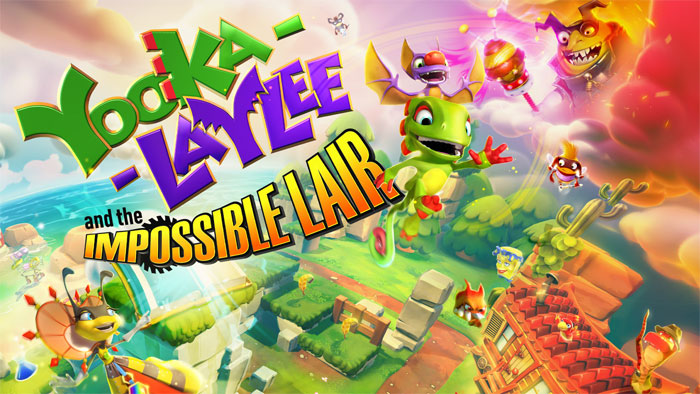 Yooka Laylee and the Impossible Lair is a spiritual successor to modern Donkey Kong Country games made by Playtonic Games, a developer comprised of ex-Rare staff.

Any DKC fan will realise in their first couple of minutes that the movement, jumping and barrel rolls are hugely influenced by DKC and to be honest, this is a very welcome thing as we’re now going on SEVEN YEARS since Nintendo last published a new Donkey Kong Country title.  Who knows when we’ll get an actual follow up to Donkey Kong Country: Tropical Freeze but unofficially, this is it.

In The Impossible Lair, the evil Captain B is back and he’s trapped a bunch of bees (???) and devised a sinister and deadly dungeon – the eponymous Impossible Lair.  Its up to Yooka (a chameleon) and Laylee (a bat) to save the day by rescuing the 48 bees and gathering enough tonics to navigate the lair to defeat the Captain.

I’m going to get the biggest grievances off my chest about Yooka Laylee and the Impossible Lair before I tuck into the good stuff.  This is a rough looking and visually mediocre game.  When I think of the stable of modern platform games – Mario Odyssey, Rayman Legends, the Crash and Spyro remasters – each of those games has a pleasing visual style whereas The Impossible Lair is just kind of gross-looking.  Yooka, Laylee, stupid Captain B and most of his minions look like some kind of cheap knock off version of Donkey Kong characters and I never really warmed to them.

But honestly, thats my only real beef.  Playing The Impossible Lair is an absolute delight. 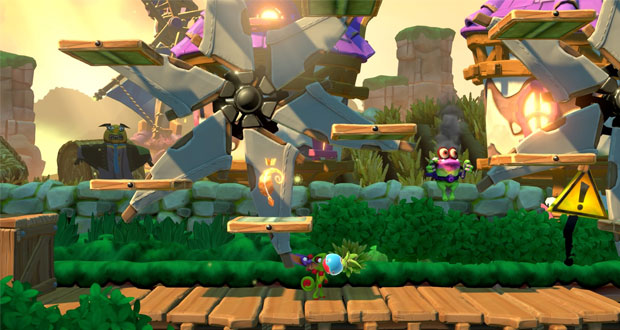 Easing into the game will be a cinch for most platform aficionados.  The timing of the jumps, the handling of the controls, the assortment of crates, mine kart levels and boss stages will all feel comfortably familiar in the best possible way for anyone who grew up playing Donkey Kong Country.  It is no bad thing to get this type of gameplay when it is so scarce and hard to come by.

The level design is excellent and smartly crafted.  Early stages introduce the various play-mechanics to the player and once you attain a mastery of the controls and familiarity with the enemy types, the end game really throws the kitchen sink at you with some deviously challenging (yet highly enjoyable) courses that will test your mettle.

What excites me most about Yooka Laylee and the Impossible Lair is that it takes a very safe genre and explores dozens of creative ideas, almost all of which are well executed and could/should become staples of the genre.  Take world maps.  We’ve had them in platform games ever since Super Mario Bros 3 but to my knowledge, The Impossible Lair is one of the first games to make it something more than just a cosmetic overlay.  The game sprinkles hidden tonics throughout the overworld, adds some puzzles that are fun without being overly taxing and basically makes it an additional exploration component of the game.

The tonics are also another great concept.  Players unlock them throughout the game and Yooka can take as many as three of them into any level.  Some of the tonics only superficially change the level (big head mode, monochrome filter, change Yooka’s appearance) and others substantially change the gameplay, with options to make it easier (more checkpoints, longer jumps etc) or harder (inverted controls).  Players taking difficulty-raising tonics into levels will get a multiplier on the quills you collect (the ingame currency) and those who use tonics that make the game easier cop a reduction in the percentage of total quills.  I loved this concept and had a good time throughout the game tinkering and experimenting with the tonics.  They personalise the experience for each player and I think is a mechanic that can be explored much further in future titles.

Lastly, the Lair itself.  Reading about it online, the Lair seems rather divisive.  It is a brutally difficult and long level that includes four battles with Captain B and a timed escape run afterwards.  An interesting thing about the Lair is can be accessed straight away so potentially, a supremely talented player could finish it without playing a single regular stage.  For 99% of us, we’ll need to rescue the 48 bees in the game, each of which allow Yooka to survive an extra hit in the Lair.  I went in with all 48 bees collected and after 13 attempts, I eventually finished it with 2 bees left.  In other words, I was hit forty six times whilst trying to beat the challenge.  Now, for some people, thats probably too daunting.  A step too far.  But for anyone who lives and breathes platform games and enjoyed the masochistic challenge of the recent Crash Bandicoot stage Stormy Ascent, this should be an enticing and hugely entertaining mountain to conquer.

In summary: Yooka Laylee plays like a dream.  It is challenging in a fun and fair way.  It’s full of ideas that reinvigorate the genre.  For fans of classic platform games, this is a very welcome and most pleasant surprise.

Yooka Laylee and the Impossible Lair