A Season With Verona 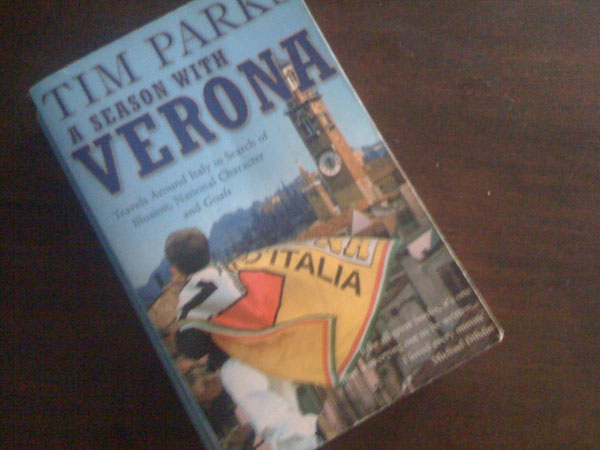 A Season With Verona by Tim Parks

I started reading A Season With Verona a couple of months ago when it was handed to me by a friend.  Written in 2001, it follows a season with relegation-battling Seria A football club Hellas Verona FC from the perspective of a British author who has lived in Italy for a number of years.

It’s a well written book and probably one of my favourite sports books that I’ve ever read.  It’s unusual in the sense that most sports books are autobiographies written by the stars themselves whereas this is written by an outsider in almost every sense of the word.  Parks isn’t Italian and nor is he a footballer himself.  So he approaches the idiosyncracies and lives of both footballer players and their die hard supporters with a healthy curiousity.  Easily the most entertaining passages from this book are when he recounts those conversations with diehard fans that he meets in the stands or when he makes observations about being a sports fan that are really relatable to your own behaviour.

I really liked the structure of his book where each chapter describes a round in the 2001 season, then tells an anecdote about Verona or football, and then concludes with the final score and the league standing for that week.  As you’ve probably noticed if you’ve read the book before, I’ve decided to steal that format for myself.

Since I didn’t buy this book I don’t know readily available it is but if you have any kind of interest in sports or Italian culture, I highly recommend A Season With Verona.

My next book: What the Dog Saw by Malcolm Gladwell

Tagged with: A Season With Verona Book Club football Italy