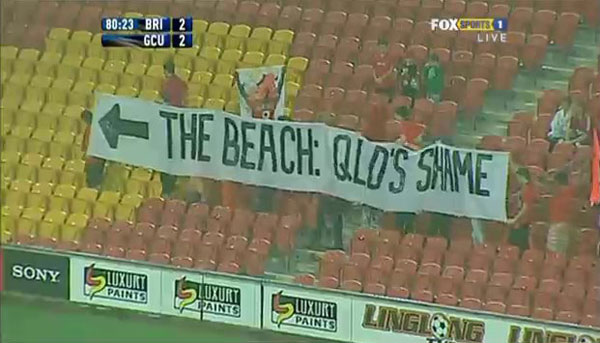 A fitting label for Gold Coast United and their supporters

It was potentially a preview of Finals Football on Boxing Day in the A-League.  Top of the table Brisbane Roar played fourth placed Gold Coast United in the M1 Derby.  Meanwhile 2nd and 3rd placed Adelaide United and Central Coast Mariners met in the other fixture on the day.

For a rivalry that has only existed for two seasons, there is plenty of passion stirred in the Queensland derby.  The typical Suncorp Stadium attendance shoots up by an additional seven or eight thousand when United come to town.  It seems Brisbane folk can get behind a common cause in cheering for their hometeam against those leather-skinned bleach blonde freaks from the Coast.  Although the Roar have gone undefeated in seventeen games, this M1 Derby gave them an another A-League hoodoo to overcome:  the Roar have never beaten United in their previous four encounters.  Would the Streak finally come to an end?

As has been the case with the weather in Queensland in the past six weeks, it was absolutely pissing down with rain on the weekend.  Although the game would go ahead, it added an interesting dimension to the game.  Would the slippery conditions adversely affect Brisbane’s natural style of play?

The opening twenty minutes showed plenty of promise for the Roar with Barbarouses and McKay both having golden opportunities parried away by in-form Gold Coast keeper Glen Moss.  Frustratingly, against the run of play, United capitalized on their first real opportunity of the game, Dino Djulbic (who?) rising above the Roar defenders to put them in the lead.

Fortunately, the Roar showed the type of character and grit that has contributed so greatly to their incredible streak this season and they levelled the scores through Kosta Barbarouses, a well worked sequence of short passes clearing a path for the Kiwi striker to slam the ball home into the roof of the net.  It was his eleventh of the season, putting him at the top of the heap for the Golden Boot honours in the A-League.

The second half began in entertaining fashion:  some local Brisbane supporters, the River City Crew, unfurled a giant banner reading ‘<- THE BEACH: QLD’S SHAME’ before carrying it over right next to the pocket of United supporters in the corner of the stadium.  It took a good five minutes before the security guards stopped laughing and decided that they should probably take the sign away.

Once again, the Gold Coast showed the kind of clinical finishing that has given them the advantage in the local derby.  Despite sustained pressure from the Roar at the start of the second half, a counter attacking chance for United saw Robson slot the ball home from a tight angle through Theoklitos’ legs, putting United 2-1 up and the Roar in real danger of ending their Streak.  Particularly with Gold Coast keeper Moss blocking chance after chance between the sticks.

Then, in the 70th minute, Barbarouses took the ball from the edge of the penalty area only to be ankle tapped (?!) by John Curtis.  Brisbane goal scoring primo Juan Carlos Solozarno slotted home the penalty to level the scores once more.  It was Solo’s tenth of the season.

Both sides continued to create some chances in the final twenty minutes of the game but neither side were able to convert.  The game finished 2-2.  The Roar yet to secure their first win over Gold Coast but The Streak has now stretched to eighteen games.

In the other match of the round, Adelaide lost 2-0 away to the Mariners.  It was Adelaide’s fourth defeat in five games, the 2-0 capitulation at the hands of the Mariners being capped off by an owngoal from ex-Roar striker Sergio Van Dyk.  The Red’s defeated means that the Roar stretch their lead at the top of the table to a formidable 11 points. 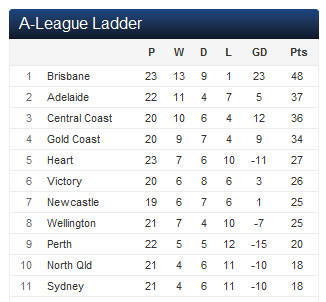