I have been meaning to blog about my year of transition but if this NOTW story doesn’t spark inspiration I don’t know what will.

Heres probably the biggest story of at least this year if not the last few years and its been all over the press here in London and the world most the of the last few weeks. I didn’t follow it too much until watching Rupert and James Murdoch facing the MP’s questioning today.

This inevitably brings some split opinions and firstly it has to be said the phone hacking of murder victims which may compromise the police investigation for journalistic gain is plain wrong. However to try and make an 80 year old chairman wholly responsible is plain unrealistic in my mind. He can only rely on his management team to spot these things.

Murdoch said fairly modestly NOTW made up 1% of his empire which considering it’s claimed to be the most read English speaking newspaper in the world is quite the statement. Just looking at Wikipedia lists all the companies he owns including Sky, Star TV, Fox Network, Times newspaper etc etc.

Murdoch came across well today and I feel looking at his life’s business achievements I respect the guy immensely. Love or hate him he has brought a huge impact on the media world, providing many interesting jobs and careers, financing the premier league with TV rights, bringing Star TV to Brunei which beat the heck out of RTB to name a few. 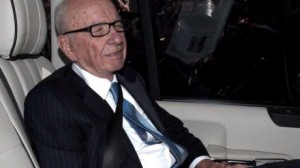 Rupert after eating some Humble Pie

To ask the guy to stand down over this at 80 years old is well a bit unrealistic. His response that he was the person to sort it out and show this was out of order and against his company’s principles is more of a result.

The people actually involved in this including the NOTW staff, the police and politicians should be the ones resigning instead of pointing the finger at Murdoch as the fall guy. Some politicians even criticised News Int for closing NOTW and putting all the staff out of work!

Murdoch sitting there saying that today was the most humble day of his life and expressed his huge regret was good enough for me and take his word he will take this as an example that any employee conduct close to this is intolerable.

My question is what about the senior police members resigning, the government connections with NOTW and the staff and management at NOTW is more of the people here at fault. Not Murdoch.

Probably a bit of stance of this, but I just don’t think Murdoch is purely to blame here and don’t think he should bow out at 80 years old for what people did within 1% of his company after the last 40 odd years its been running.

Previous: A brief sabbatical
Next: On the first day of ramadan…