“There’s nothing more charming to the Academy that a colonialist commoner”
– Mark Kermode, reviewing The King’s Speech.

Watching The King’s Speech in a packed cinema in Australia, nearly three months after its release, I can vouch for this film’s appeal not just to the Academy (the film has garnered the most Oscar nominations this year of any film) but also to Australians who clearly love the sight of their fellow man rubbing elbows with the monarchy.

The central conceit of a toffee-nosed British aristocrat getting treated as an equal by a dry-witted Aussie commoner resonates strongly with local audiences.  Maybe even more so than usual after this wretched summer of cricket where the Ashes were lost to the old enemy on home soil.  The crowd roared with laughter and approval each and every time speech therapist Lionel Logue knocked Prince Albert down off his perch.  From their very first meeting Lionel breeches royal etiquette by referring the Prince by his first name ‘Bertie’ and before long he has the future king of England unleashing a verbal tirade of seventeen consecutive ‘fuck’s.

This is a film about the true story of an unlikely friendship formed between one of the most powerful men on Earth and a failed actor who helps him overcome his speech impediment.

Colin Firth plays Prince Albert or ‘Bertie’ who, unwillingly, is destined to become King George VI.  Bertie is a troubled man whose title and responsibility wear heavily on his shoulders.  He is filled with a constant feeling of dread and self loathing.  He fears public speaking due to his stammer and yet he must regularly do so, as is his royal duty.

The root cause of his speech impediment is a troubled upbringing where he was cruelly treated by his nanny and raised by a difficult father who forced him to change his natural left-handedness and had little time or sympathy for his stammer.  Bertie also grew used to playing second fiddle to his more charismatic older brother Edward who would taunt him with catcalls of ‘B-B-B-Bertie’.

When Bertie’s father King George V passes away, the crown was to pass to Edward.  However, Edward is in a relationship and wishes to marry the divorced American socialite Wallis Simpson.  By doing this, he forgoes the crown which then passes onto Bertie.

The importance of Bertie becoming a great orator cannot be understated.  The King’s Speech goes to great lengths to convey this importance.  As King George V rightly recognizes, the role of a monarch fundamentally changed with the introduction of the radio as it now means the royal family has a direct link into the homes of the British Empire who seek comfort and direction at a time of impending war.  Not only would the British Empire be listening, so too would their American allies and their enemies in Nazi Germany.  To have a voice that stammers and stutters over the airwaves, in contrast with the booming Nuremberg rallies from Hitler, would simply not do.

What I liked about The King’s Speech is that despite the film’s opening chapter where Bertie is made to look like an arrogant and snobbish blue-blood, we gradually come to discover the more admirable and noble traits that he has as the story unfolds.  There is a real depth and complexity to the characters.  The relationship between Bertie and Lionel is also more even-handed than on first appearances.  Neither Bertie nor Lionel have any close friends beyond their spouses.  And Lionel, as a failed actor turned therapist, appears to find validation in his life’s choices when he sees the positive effect he has on Bertie.  They are good for one another and are both likable characters in their own way.

Depsite being a film about the British monarchy, director Tom Hooper opts to cramp most of the film in tight enclosed spaces.  We spend most of the time watching Bertie and Lionel banter in Lionel’s modest and unremarkable office.  Shots of Bertie are often from a high angle, making him appear diminuitive in stature.  He wears drab and indiscreet clothes.  Occasionally, super close ups are used, capturing Bertie’s panicked eyes and quivering top lip.  It is only towards the end of the film, once Bertie finds his voice and his confidence, does Hooper finally indulge us in the more opulent shots of Buckingham Palace with Bertie dressed in regal attire, waving to his adoring subjects from the balcony.

The King’s Speech is a charming character study of two somewhat obstinate men who forge a bond of trust and lifelong friendship with one another.  They’re pleasant company to observe and enjoy.  Particularly when they’re spending most of their time doing this: 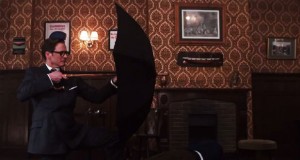