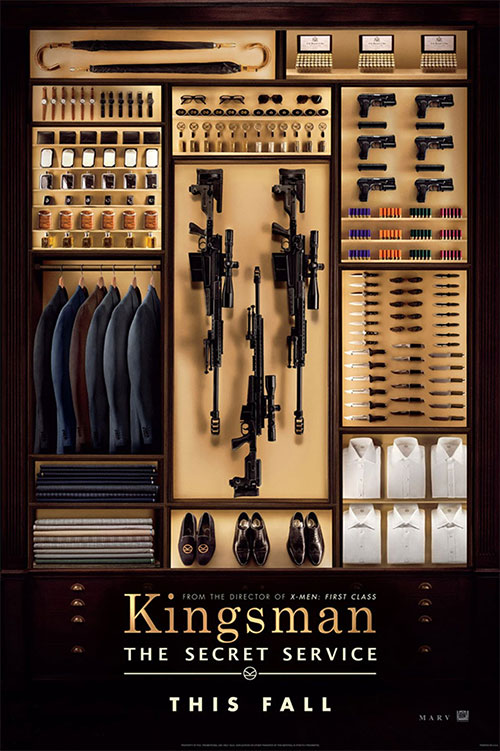 About four years ago, when I was beginning to despair at the endless onslaught of super hero films, I was delighted to discover Matthew Vaughn’s Kick-Ass, which was the anti-thesis of the typical clean cut Marvel super hero production.  It caught most people’s attention at the time because a ten year old Chloe Moretz utters the c-bomb in the opening ten minutes of the film but its gleefully offensive language and over the top violence belied what was also a well made, subversive send up of the super hero genre.

Since then, Matthew Vaughn went on to make a conventional Marvel super hero movie (the uneven X-Men: First Class) and now he’s back with Kingsman: The Secret Service, a film made in the same spirit as Kick-Ass but applied to the gentleman spy genre.

Taron Egerton, in his first major film role, plays Egsy, a ne’er-do-well English hoodlum who has grown up in a tough neighbourhood with his baby brother, his wayward single mother and her thuggish boyfriend Dean.  Unbenowst to Egsy, his father belonged to a secret spy agency known as The Kingsmen, and he gave his life to save Agent Galahad, played by Colin Firth.

When Egsy gets picked up by the police for car-jacking Dean’s ride, he is bailed out by Galahad.  They share a pint at a bar and are accosted by Dean and his gang who are looking for revenge.  Galahad makes short work of them with a combination of James Bond style gadgets and a flurry of his fists.  Honestly, you might not think that Colin Firth has it in him to be a credible action star but thanks to Matthew Vaughn’s high octane cinematics and some clever fight choreography, Firth looks like a million bucks.  It all made sense when I read up on the film later on and discovered that Vaughn produced Lock, Stock and Two Smoking Barrels and Snatch. 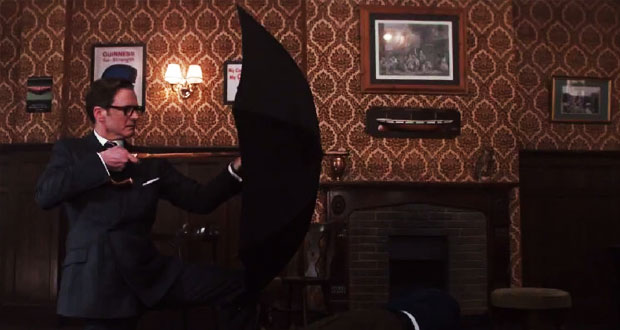 Kingsman follows the framework of a super hero origin story mixed in with Bond style gadgets and villains.  The Big Bad in the film is Richmond Valentine (played with an absurd lisp by Samuel L Jackson), a billionaire technology mogul who can’t stand the sight of blood and is an insane conservationist.  Valentine determines that the best way to save mother nature is to give away free cell phones to the entire planet which is embedded with a chip that turns people into murderous savages (I believe this was used in the original Naked Gun film oddly enough) and that a culling of a couple of billion people will be just what Mother Earth needs to recover from its pollution and overpopulation problems.  Valentine is aided by Gazelle, a woman with razor sharp scythes for legs.

Kingsman is at its best as a bad ass, no holds barred action movie.  Vaughn has an eye for bone crunching fight sequences that straddle that line of horrific and comedic.  He showed glimpses of it in Kick Ass and he stamps his authority on it with Kingsman thanks in part to a breathtakingly chaotic rumble in a church that rivals Kill Bill‘s Crazy Eighty Eight battle for its bombast, energy and sheer volume of participants.  You can definitely see the heritage of the early Guy Ritchie films in Kingsman and even though those films are over a decade old, few people have succeeded in capturing that same sense of slick, in-your-face action.

The film isn’t quite as successful with its lampooning of the other Bond genre tropes.  It’s a little too on the nose for me when it comes to Samuel L Jackson playing a self aware villain who knows he’s in a movie and the film objectifies women more blatantly than Bond films and seems completely devoid of any wit or commentary about this particular genre trope.  It just follows 007’s lead with less tact.

One of the weirdest juxtapositions I have seen in a long time is the film transitioning from a sensationally crude sex joke at the end of the film to a credit that acknowledge’s Vaughn’s bereaved mother.  A peculiar note to end the film on, but perhaps befitting of its wild, offensive and care-free ethos.

Summary : It's not as good as Kick Ass but the film has moments where it really shines, most notably the incredible scene in the church which is a fight scene for the ages.

Previous: Bayonetta 2
Next: The Theory Of Everything 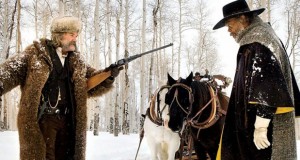 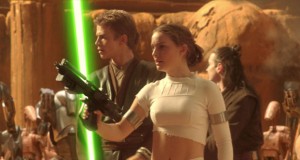