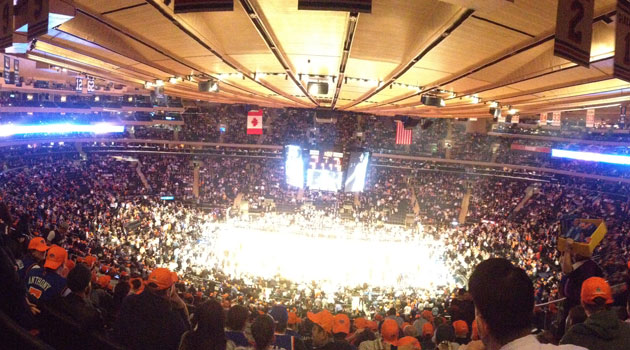 If you ever have a holiday in America and you have even a passing interest in sports, its worth getting along to a game at one of their four major sporting leagues (NFL, NBA, MLB and NHL).  They offer an opportunity to watch a sport that is typically played in few other countries and a chance to soak up a sports-entertainment atmosphere that the Americans pioneered and is well worth experiencing firsthand.  Of those four major sporting codes, the NBA is probably the definitive sport for mixing showmanship and athletic ability.

I can tell you that MSG is well worth a visit for anyone familiar with its history.  The stadium is full of memorabilia from the moment you set foot in the arena and it is one of those venues that is built in such a way that there is hardly a bad seat in the house.  We bought tickets for the game from someone who held season passes and posted them for sale on an NBA-approved reseller website.  We had a great view and had seats right in line with the middle of the court.

Only one thing worth noting for a tourist:  it was the only venue that actually asked me for passport ID when I went to buy a beer.  Everywhere else in the country accepted my Queensland drivers license. 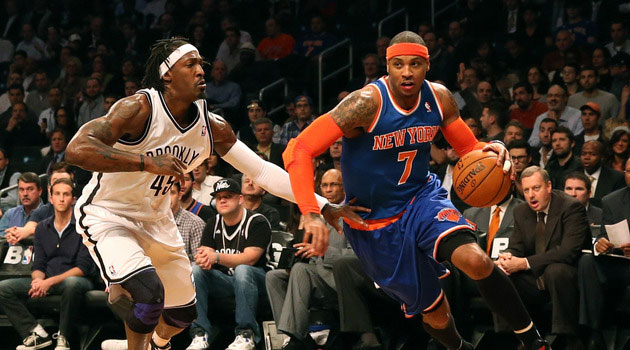 One of the things they do in MSG to help build the atmosphere is to hand out free merchandise to everyone in attendance.  In this instance we got these bright, nuclear orange baseball caps.  It creates a great visual spectacle when every Knicks supporter in the arena has one.

Prior to watching this game, I didn’t really know a whole lot about basketball.  As a casual viewer, I occasionally watched the playoff series when it would be on ESPN or Star Sports in Brunei.  Like most American sports I learned the basics of the sport through video games.  Fortunately, the lady who sat next to me patiently explained the rules and the nuances of the game I was watching.

The Knicks were playing the Brooklyn Nets that night.  I didn’t even know there was a Brooklyn Nets.  I certainly didn’t remember them in NBA Jam.  The lady explained that they used to be the New Jersey Nets (who I remembered) but the team was bought by Jay-Z, rebranded and moved to Brookyln last year.  This lead to a pretty significant shift in the demographics of their supporters and we saw it in the tiny cluster of Nets fans sitting in front of us.  When they were based in New Jersey, the Nets supporters were predominantly the dudes with gold chains and fake tans that you would see on Jersey Shore.  After they moved to Brooklyn, their new fan base was mostly inner city African Americans.  It was pretty funny watching this group of Nets supporters in front of us because they were all from Brooklyn except for this one pasty, overweight kid in his mid-twenties from Jersey who was doing his best to fit in with the new supporters for his old team.

Moving teams in American sports is apparently reasonably common practice.  The Charlotte Hornets changed cities and became the New Orleans Hornets.  The Oakland Raiders moved to Los Angeles and so on.  I think its definitely a uniquely American phenomenon.  I can’t imagine the Brisbane Broncos suddenly becoming the Sydney Broncos overnight and finding a new fan base.  The people here wouldn’t stand for it.

I noticed one Nets player consistently drawing boos when he got the ball.  He didn’t even seem to be very good.  “That’s Kris Humphries,” explained my new friend sitting next to me, “he’s Kim Kardashian’s ex-husband so everyone likes to give him shit.” 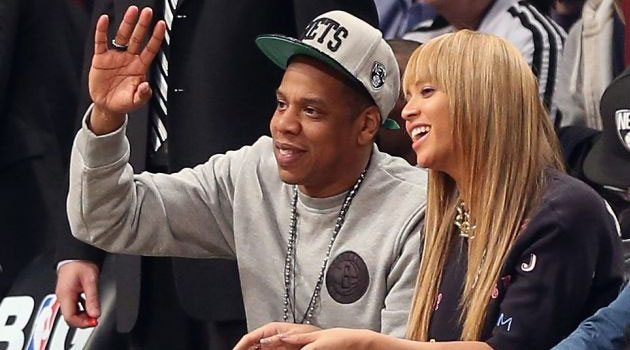 Speaking of celebrities, going to a Knicks game is a pretty good way to do celebrity spotting if you’re into that sort of thing.  I mentioned in LA that there are these stupid bus tours were you visit locations where famous people supposedly buy clothes or have coffee but of course you never actually see people there at the time.  The Knicks game on the other hand was attended by Spike Lee (a diehard Knicks fan), Jay-Z, Beyonce and Knicks legend Patrick Ewing.

So what is a regular NBA season like?  Ridiculously long.  A Super Rugby season has 18 rounds.  The English Premiere League has 38.  The NBA has a mind boggling 82 rounds so each team plays each other a handful of times.  Once these 2,400+ matches are played, then a generous sixteen out of thirty teams advance into the playoffs.  So realistically, you just need to maintain a winning record of greater than 50% and you’ll probably go through to the finals.  It means that after fifty rounds or so, you have a pretty good idea if you’re getting into the finals.  At the time of the match we saw, New York and Brooklyn were first and third in the Eastern Conference so they were both highly likely to advance to the finals (unless they went on a 20 game losing streak) so the game was pretty unimportant in the scheme of things.  It’s a pretty strange format for a league that leads to plenty of low-stakes matches unless you’re a team that is hovering right around the brink of the eighth qualifying spot.

As for the sport of basketball itself, it turns out that I’ve been missing out.  I really enjoyed the game I saw.  A fourth quarter surge from the Knicks eventually saw them beat the Nets 100 to 84 but for the majority of the game, it was an even contest with multiple lead changes.  I always presumed the highlight reel shows you see on ESPN captured rare spectacles but the game I saw was filled with incredible slam dunks, alley oops, three pointers and trick shots.  Carmello Anthony, the star player of the Knicks, really blew me away with his performance that night.

Since returning to Australia from my holiday, I’ve become a follower of the NBA.  I don’t really support any particular team.  I guess I sort of cheer for the Knicks since they were the team I saw but I’ll watch whatever I can get.  Basketball can be a fun spectator sport on tv but watching it live is a whole other beast.  It’s definitely worth checking out.