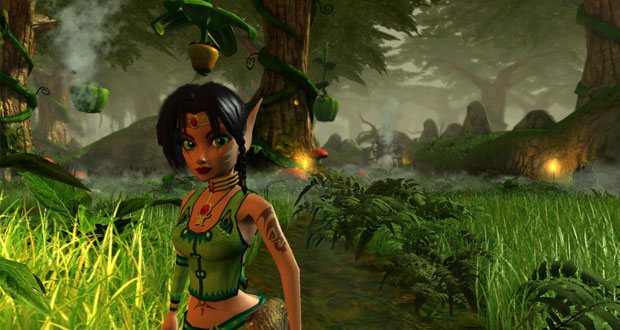 It’s always exciting when you buy a new video game console.  Video gaming is young industry and its interesting to see the graphical enhancements and the different gameplay modes made possible by new technology.  What will the first game you play on the new console be like?

There’s a certain amount of goodwill which you lend to that first game you play.  After all, when you’ve spend the better part of $1,000 on the console, the controllers, the hard drive and the game itself, you’re pretty much determined to just enjoy yourself no matter what.

Of course, for every time I’ve played a launch title like Super Mario World, Crazy Taxi or Halo, I’ve also played launch titles like Summoner for the Playstation 2.

Unfortunately, Kameo reminded me more of the sensation of playing Summoner than anything Miyamoto ever created.

The game starts off well enough with a crazy colourful environment and some slightly dodgy cutscene introducing the story of Kameo who is betrayed by her sister who sells out her family and lets them get kidnapped by a bunch of trolls (yes, that old chestnut).  The opening level, which actually pits you against the final boss Thorn, King of the Trolls plays like any other tutorial level as you start your quest to recover your family.

It’s not too long though before the excitement of the game’s newness wears off and a few bugbears become apparent pretty quickly.  The game looks colourful and shiny but its also inherited that horrible plastic appearance thats prevalent in Perfect Dark Zero, another 360 launch title.  The developers, overdoing it when playing with the Xbox 360’s special effects, have let the technology dictate how the game looks.  And it looks pretty shit.

The characters too, seem overdesigned, which is maybe to be expected for a game that has seen its development cycle move the game from Gamecube to Xbox to Xbox 360.  While the game’s idea for allowing the main character Kameo to morph into various creatures to perform different attacks is neat, the actually gameplay is a lot less inspired.  In the opening level, in a castle otherwise filled with metal contraptions and stone walls, there is a vertical incline covered entirely in ice for no reason.  This is the obvious prompt to use the yeti character Chilla.  It’s nice that the developers have thought to have created character specific areas of the game, but you kind of wish they had been a bit more clever about it.  It’s only a couple of steps removed from having random floating random platforms in midair and collecting 100 gold coins/rings/fruit etc in platforming tedium.

The other disappointment is the battle with the 1,000 trolls that was seen in the trailer.  What looks like an epic battle scene where you ride on horseback through a massive army is actually a sterile gaming experience.  You press up on the controller and the computer does everything else for you.  Weak.

I may sound a bit harsh on the game but its only because you get the feeling that with a bit more imagination and ambition, they could’ve created something a bit more memorable for the 360 launch.  The game is completely servicable in its gameplay but its so wretchedly unambitious and safe that it cant help but disappoint.

Fortunately, there was another launch title for the Australian Xbox 360 debut which does fit the mantle of a true next generation game experience.  That game is Elder Scrolls IV:  Oblivion.

A lousy and forgettable launch title

Summary : A thoroughly uninspiring and forgettable launch title for the Xbox 360.