The Casual Vacancy by JK Rowling 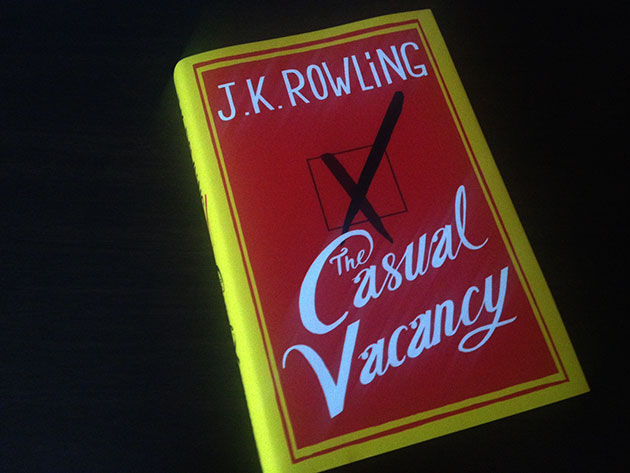 “Barry Fairbrother did not want to go out to dinner.”

The Casual Vacancy, JK Rowling’s first work of adult fiction, is set in the sleepy English town of Pagford and begins with the death of local parish councillor Barry Fairbrother.  Fairbrother is a popular figure in the community and was involved in everything from being a father to a family of four, coaching the school rowing team to dabbling in local politics.

Fairbrother’s sudden and unexpected death opens a vacancy on the council and leads to a heated contest for his seat between rival factions in the community.  The election however, takes an unexpected turn as the council’s online messageboard begins to annonymously post embarassing dark secrets about the candidates in the race.

I really didn’t know what to make of The Casual Vacancy at first.  It is an unrelentingly negative and dour story with a caustic tone that sneers at the various social classes and ethnicities represented in Pagford.  Almost all the characters are caricatures made up of the negative stereotypes associated with their social strata.

The working class labourer Simon is an abusive father who beats his wife and kids.  The single mother Terri lapses in and out of rehab and is a weak-willed junkie.  The deputy principal Cubby is worried he’s a pedophile.  The Indian doctor Sukvinder lives in a loveless arranged marriage.  The kids take drugs and hate the adults.  The rich families are vain and self absorbed.  The rich women use fake tans.  The rich men cheat on their wives.  The social worker has problems with her own relationship.  You get the picture.

The style of writing that Rowling employs is aggressively, almost obsessively fixated on picking apart the terrible traits of the townsfolk of Pagford and how they treat one another.  I don’t think I read a single positive thing about a character in the first hundred pages.  And a lot of the focus is on the minutia of how people can be pricks to one another in their day to day lives.  Tuning out to your partner talking about their day.  Silent disappointment that your child didn’t turn out the way you hoped.  Wanting to end a relationship but passively dragging it along because breaking up is too much effort.

The content is at times troubling and by the books end, there has been child abuse, domestic abuse, drug abuse, rape, self harm and suicide.  The story begins in a difficult place and ends up somewhere off the edge of a cliff with little redemption offered for most of those involved.

I liked a line from the Guardian review of this book which mentioned that JK Rowling was in a unique position to write about both the working class and the wealthy – she of course spent the first thirty years of her life as a single mother struggling to hold down a job and then ten years later she became the richest woman in the world.

If Rowling is in any way transposing her views from her life experience onto the characters in this book, then it seems the sum total of her thoughts on society is an equal level of contempt and dispair at absolutely everyone.

Despite the unexpectedly nihilistic tone of this novel, I didn’t exactly hate it.  In fact, I think its pretty interesting that JK Rowling chose to write a satire so bleak and unforgiving when no one saw it coming.

But what to make of it?  I didn’t really come away with a clear understanding of what Rowling wanted to say about the social, political and class issues that are superficially explored in this book.  The characters don’t get an opportunity to develop into more than what they start out as and Rowling showers an even handed level of ridicule and scorn to all involved.

A strange and angry work of fiction.

Next:  Gone Girl by Gillian Flynn

“When I think of my wife, I always think of her head.”

Previous: Glendronach 18 Year Old
Next: PAX is coming to Australia