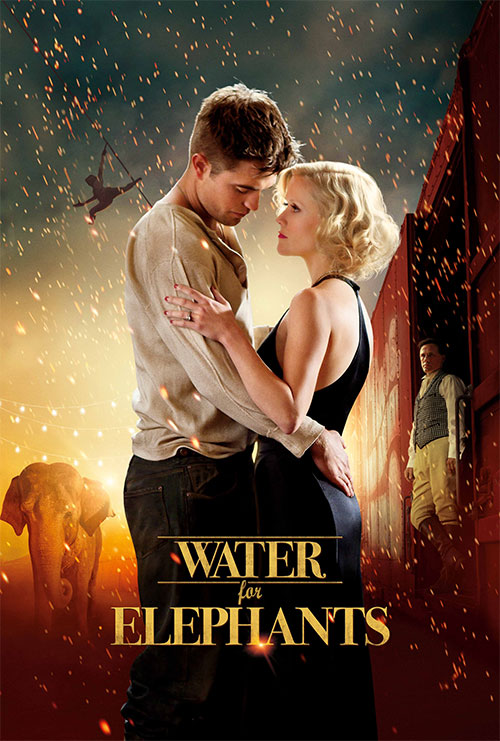 Water For Elephants is a romantic drama set in prohibition era America in which a young Polish migrant Jacob Jankowski is abruptly orphaned and made homeless just as he is on the verge on completing his vetinary science degree at Cornell University.

Jacob is literally in the process of sitting his final exam when he finds out his parents have been killed in a car accident.  To make matters worse, it turns out his father’s altruistic behaviour in handling his business affairs during the Depression has left Jacob with a mountain of debt and the family home is foreclosed.

This forces Jacob to hit the road and search for a new life.  He finds his new beginning on a railway line when he becomes a stowaway on a passing train.  As it happens, the train is carrying the colourful cast of characters from the Benzini Brothers Circus.  After befriending the workers onboard, Jacob is taken to meet the circus owner and ringmaster August to apply for work.  Although Jacob fails to convince August of his worth as a labourer, August agrees to take him on as the circus’ vet after Jacob notices their headlining horse Silverstar has a debilitating bone disease in its hoof.

Jacob’s job as the animal’s caretaker requires him to work closesly with August’s wife Marlena, who is the star performer on the show.  Shortly after Silverstar is put down, August procures a fifty year old elephant, Rosie, which he hopes will become the new headline act.

Things start to get complicated when Jacob begins to develop feelings for Marlena.  Making things even more messy is August’s hot temper which he takes out on Rosie by assaulting her with a ‘bull hook’ when she is unresponsive to his commands.  Jacob becomes determined to save both Marlena and Rosie from August’s command over them which leads to a deadly and chaotic climax at the final Benzini Brothers circus performance. 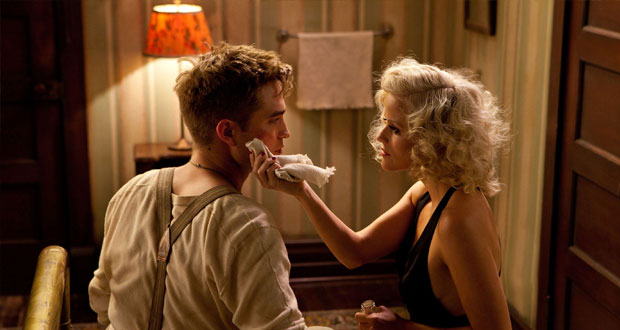 I really enjoyed Sara Gruen’s novel of the same name and I was pleased with this cinematic adaptation.  What I wanted to see in the film was the same old timey quality that the book had and to give the audience an insight into life on the road with a travelling circus.  I think this adaptation manages to do both.

Water For Elephants is filled with artful cinematography that has an eye for detail.  One particular scene that I liked was a prolonged tracking shot of Jacob walking through the carriages of the train where you can see the various performers, labourers and animals.  In that one single shot we can see the hardship of life on the road, the commradery of each cluster of performers and the class divide amongst the ranks.  Throughout the film we see both the splendor and spectacle of the circus as well as the gritty and wretched livelihoods of people struggling through the Depression.  If the Academy has a long enough memory, I think this film could be a contender to pick up some costume and cinematography awards at next year’s Oscars.

Robert Pattison puts in a good performance as Jacob.  I get a similar vibe from him that I do with Leonardo Di Caprio post-Titanic.  It will take Pattison time to shake the teen heart throb mantle after appearing in the Twilight films but as long as he continues to take interesting roles such as this, I believe he will earn a reputation as a credible actor.

Reese Witherspoon has the right look and mannerisms to fit the bill as the lovelorn starlet.  The role of Marlena is a challenging one.  She is required to be beholden to a violent husband, build chemistry with a much younger leading male and look good doing sommersaults off an elephant.

Christophe Waltz is an intense and powerful presence here just as he was in Inglorious Basterds.  Waltz has an expressive face that commands attention and he has an uncanny knack for smiling at those around him in a way that puts you on edge.  It feels easy to understand what he is capable of doing, long before he strikes.

In short, all three leads do a great job.  And in the context of this film, it means that you’ll be rooting for the lovers to find their liberation, jeering the villain till he gets his come uppance and cheering on Rosie when she takes matters into her own hands in the film’s climactic circus riot.

Summary : A solid adaptation of Sara Gruen's novel. The setting and the performances from the leads set it apart from standard rom com fare.

Previous: Youtube Friday: White House Correspondents Dinner
Next: I am a sleepy drunk

Water For Elephants by Sara Gruen