“Hey hey! I just finished my LAST EVER UNIT so I’m on a bit of a high at the moment.”

Okay, so as it turned out, I miscalculated by about 100 days but I can tell you now, that I have finally finished my degree.

I went in to see Robin Teo today to ask him if I passed the unit. I had submitted my website assignment a full week before and got no reply as to what my grade was. He talked me through my website and gave me some feedback on it. I actually agreed with most of what he said but then he concluded the only thing lacking was better navigation. Frankly I’m disinclined to acquiesce to his suggestion since each subsection on my website has a link to every single other page. What’s curious is that he didn’t suggest it in any sort of bitter ‘I’m doing everything I can to stop you passing this unit’ sort of way but he was really sincerely thought I needed better navigation between pages. But it doesn’t really matter. I’ve passed and now I’m finally on my way to getting out of Perth and in to the Real World (its over in Melbourne).

So…it’s been a while since I’ve last updated and I can tell you right now that you haven’t missed a thing. I’ve just been job searching, sweating out the Australian Summer and hanging out with some buddies.

Check out the film The Station Agent if you get the chance. It’s got the dwarf from ‘Elf’ in it and Michelle Williams, if you need a bit of encouragement.

Norwich 1 Westham 1. You take what you can get.

Scotland got buried by England in the rugby. I think it’ll be a while before we get another repeat performance of *that* Six Nations 2000 game where Scotland truely kicked some English ass. Someone should release it on DVD.

Being a consumer whore, I don’t really care much for this time of year. No one releases any good films because its the middle of the awards season. The music industry can suck my man-oysters if they think I’m going to put down 30 bucks for a CD (not that there’s much good out at the moment anyways). Good videogames only seem to come out in November/December nowadays and the Monty Python Hardcover Autobiography costs a whopping eighty dollars. This makes me sad.

Went to the Tropfest film festival last night. Its a show for short flms made in Australia. This year, Melbourne’s version got Selma Hayek (previous years they had Samuel L Jackson and Ewan McGregor) and Perth got dick. The screening was at an outdoor cinema next door to a pub which had a live band playing so they were competing for volume. Highlight/lowlight (depending on your point of view) of the night was when the screening was showing a 5 minute piece on a mother grieving for her dead son while the pub band was playing a happy go lucky mariachi tune complete with trumpet and the singer shouting ‘ole!’. 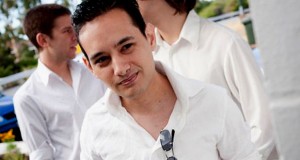