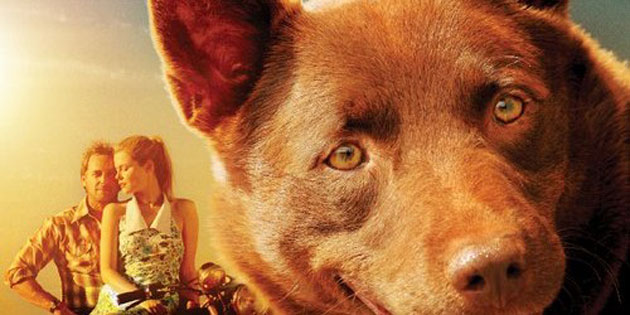 Red Dog tells the true story of Australia’s Most Famous Dog who, in the 1970s, hung around the small mining community of Dampier in the Pilbara region of Western Australia.  Named after the coat of red dust that permanently clung to his fur, Red Dog originally didn’t belong to any single master.  Instead he was a wanderer who helped keep the company of any miners who would have him, such as the immigrant Italian worker Vanno who can’t stop talking about life ‘back home in Abruzzi’ or the somber Jocko who has never smiled since the death of his wife and daughter.

Red Dog eventually finds his master in John, a nomadic Yankee bus driver who roams the world but ends up staying in Dampier when he falls in love with a local girl.  Red Dog becomes John’s faithful companion.  That is until one day when a tragic accident occurs (these are mandatory in films where dogs are the star).  Red Dog, unable to find his master, patiently waits at home for him to return for three long weeks before embarking on a journey around Western Australia to search for him.

The film pays homage to the real Red Dog and what he meant to the Dampier community in this well-crafted love letter to life in rural Australia.

I remember when I watched the documentaries on The Lord of the Rings Extended Edition discs, there was a historian that talked about how crafting a folklore for British people was at the forefront of Tolkien’s mind when he wrote that series.  It struck me as being quite a noble goal, if not a tad ambitious.  Australia of course has a far younger and shorter history than Britain but I feel this adaptation of the Greyfriar’s Bobby story is a terrific example of this country creating its own fable with Australian sensibilities.  There is a real feeling of appreciation from director Kriv Stenders of Australia’s multi-cultural origins, its irreverent sense of humour and even some of the edgier aspects of Australian life.  Despite being an All Ages film, Red Dog doesn’t shy away from exploring topics such as suicide and binge drinking.

In that sense, Red Dog feels like a family film made from another era.  It’s not afraid to be lengthy, ambitious in its emotional highs and lows and doesn’t feel sanitized or watered down any.  The film is suitable for a younger audience but trusts they can keep up with a muddled chronology, multiple narrators and adult concepts.  The ambition pays off handsomely.  I defy anyone to watch this film and not be moved by some of the scenes at the end of the tale.

After several years in the wilderness, Australian cinema appears to have made a welcome return to form.  Animal Kingdom, Snowtown and now Red Dog are all great films that are high in quality and easy to recommend.

Summary : A great Australian all ages feature about life in the outback and the bond between man and man's best friend.

Previous: Happy Birthday To Me
Next: Snow In Wellington