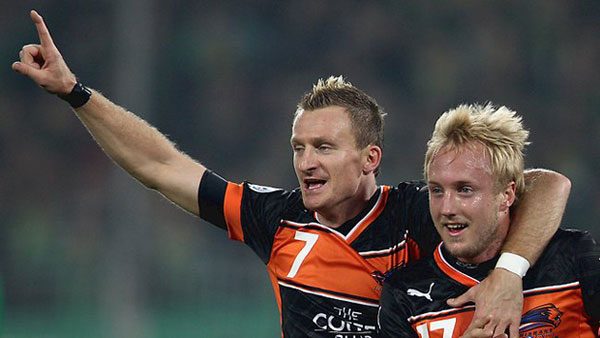 Last year during the Asian Cup, I blogged about my incredulity at the sheer crappiness of India and China as footballing nations.  I argued that although both countries had a large portion of their population living in poverty who wouldn’t have the opportunities to develop in football, they both still have around 50-100 million people living in middle to upper class conditions.  Surely, it would only be a matter of time before they improve?

Well, India still sucks but there is a strong likelihood that China will improve.  The A-League in Australia is just seven years old but what you might not know is that the Chinese Super League is not much older.  It’s just started it’s nineth season and although the league has yet to produce any world-conquering stars of their own, it seems the country has finally established a respectable competition that hasn’t been hampered by corruption or match fixing and its finally starting to draw some big name talent.  Nicholas Anelka now plays in the Super League and its rumoured that the competition is not far off aquiring the services of Frank Lampard and that they are interested in Didier Drogba.  Basically, the league will soon be entirely populated by Chelsea’s best players from four years ago.  With this sort of money kicking around to draw in experienced players, it can only help improve the local players.

For Brisbane Roar’s second ever Asian Champions League game they travelled to Beijing to play Beijing Guoan.  The game had a great atmosphere.  Beijing Guoan usually attract 40,000 fans to their Beijing Workers Stadium and this game was no different.  It was easily the largest crowd the Roar have played in front of this year.  The side also sported a former Roar player – Reinaldo, who had transferred there after a season in Qatar.

The Roar found themselves a goal down in less than ten minutes when Michael Theoklitos was beaten at the near post in what should have been a regulation save.  It was an odd game.  The Roar stormed back and piled on chance after chance which both Berisha and Henrique continued to butcher.  One shot that Berisha skied over the bar looked like it would have been easier to score than miss.  Eventually, the Roar’s emerging star Mitch Nichols evened the ledger with a header from the edge of the six yard box.  It was Brisbane’s first goal in the ACL.  Although they piled on more pressure, the Roar couldn’t crack a second goal.  The second half saw a much more composed Beijing Guoan side who kept the Roar at bay.  The game finished 1-1 with the Roar securing their first ever ACL point.  Next game, they travel away to Korea to play Ulsan.

Previous: The Grey
Next: Youtube Friday: Teenagers are pretty excited about The Hunger Games