The Kewell And Emerton Show

What if you promoted an entire football league with two high profile Socceroos players and their respective glamour clubs and they didn’t score any goals or win any games?  That’s the position the A-League finds itself in at the moment as both Sydney FC and Melbourne Victory lost their games in Round Two and both failed to find the back of the net for the second week in a row.  It’s early days yet so no one is hitting the panic button and for now the Fox Sports media is diligently continuing its focus on these two sides.  There has been little coverage given to Perth Glory’s perfect start to the season, Wellington Phoenix’s suprisingly strong start or Brisbane Roar’s winning streak which is now five games away from being the longest streak for any professional footballing code in Australia ever (the Eastern Suburb Roosters had a 35 game streak in the 1930s according to commentator Simon Hill).

The positive side of the hype surrounding Harry Kewell and Brett Emerton is that there has been a healthy increase in attendances for any game involving these two players.  Hindmarsh stadium was close to a sellout when Harry Kewell and the Melbourne Victory visited Adelaide United.  And Sydney FC had their biggest crowd yet for their first home game of a season.  Presumably these numbers could continue to go up…provided Melbourne and Sydney start scoring goals and winning games.

The Wellington Phoenix weren’t a highly fancied team at the start of the year.  They had very little transfer market activity pre-season and if anything, they lost a great player in Marcos Rojas to Melbourne Victory.  Yet they were unlucky not to win their opening game of the season against Gold Coast United who scored a late equalizer and this week they beat the Newcastle Jets 2-0.  Unfortunately for an already injury depleted side, they lost star striker Paul Ifil in the first fifteen minutes of the game to injury and then the referee went on a rampage in the second half trying his best to outperform rugby referee Allain Rolland in term’s of refereeing infamy.  He sent off a Phoenix player with a straight red for tackling a Jets player on the edge of the penalty area despite there being two other Phoenix defenders between the player and the goal.  The ref then topped his performance by sending off Tim Brown for time-wasting at the end of the game for taking three seconds to throw in the ball.  I presume next round when the Phoenix visit the in-form Perth Glory, they will just round up a few guys hanging out at the airport and let them fill in the vacant positions.

Adelaide United and Melbourne Victory played out an entertaining game of football on Friday night with Adelaide running out deserved 1-0 winners.  The game was played in front of a record home crowd and the quality of the football was top notch.  So what did the local newssite Adelaide Now report?  That football violence was ruining the game. This was based on ten arrests being made at a game attended by 15,000 people.  There’s about ten people arrested in one power play session at the cricket games I’ve attended at the Gabba and that never makes the news.  This season saw yet more high profile NRL players get arrested for sexual assault.  Yet the media continues to turn a blind eye and focus its attention on football.  I have absolutely no idea why this happens.  The A-League is now played during an entirely seperate season away from NRL and AFL plus Fox Sports and News Ltd cover all these sports so its not even like soccer is ‘the competition’. 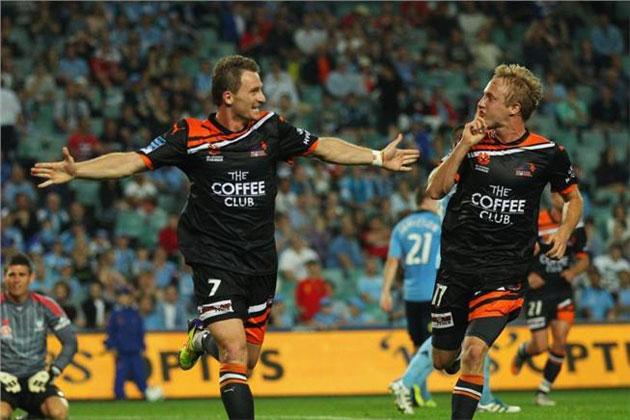 A win or a draw here would see the Brisbane Roar reach thirty undefeated games in a row.

Sydney FC came out firing in this game and asserted their control around the fifteen minute mark.  They held possession and had plenty of time in the opposite half.  Unfortunately for them, the new look Roar defence, which played a very high line, played the offside trap expertly, catching the Sydney strikers out time and time again.  Former Blackburn Rover and Sydney marquee player Brett Emerton failed to trouble Ivan Franjic and still didn’t really click with his teammates.  Comparatively, the Roar players looked comfortable, even when under the sustained Sydney attack.  Inside five minutes of halftime, Roar youngster James Meyer fired a shot at goal and new aquisition Besart Berisha expertly anticipated Liam Reddy’s spill and tapped in a simple goal to give the Roar the lead.  It was the Albanian’s first goal for the club and an excellent poachers goal.  It also reminded me of the sweet relief we have as a club now that we don’t have rubbish goal keepers like Liam Reddy and Griffin McMaster.  Sweet Jesus, they are awful.  I’m not even sure McMaster is playing in a professional or semi-professional capacity any more.

In the second half, the Roar really began to shine and show why they are the best in the league.  Their superior cardio began to show as Sydney wiltered and their confidence grew more and more.  Around the 70 minute mark it paid off with a second goal from Thomas Broich who latched onto a cross from former Sydney player Kofi Danning.  Danning represents another savvy pick up from coach Ange Postecoglou.  At Sydney, Danning was a bench warmer and wasn’t amounting to a whole lot.  For the Roar he has already looked potent in both games and now has a goal assist to his credit.

In the end, a comfortable 2-0 win for the Roar extends their undefeated streak to 30 games.  Sydney are still a side rebuilding.  The Roar will be in for a much sterner challenge this Friday when they host a Queensland derby with rivals Gold Coast United. 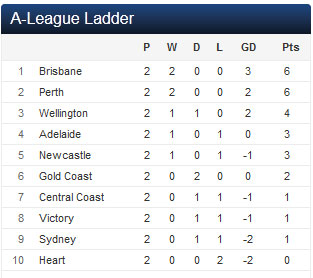 Previous: Rugby World Cup Semi Finals – Breaking the choke hold
Next: The Joys of Gaming In 2011