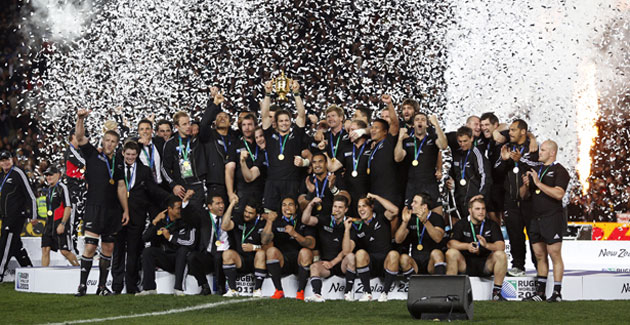 It certainly ended up being a lot closer than we all thought.  France were inconsistent throughout this tournament and after a wobbly performance last week, they turned it up big time in their third grand final appearance and pushed the All Blacks to the limit and ultimately lost by a single point.  For the All Blacks, although the game was a lot closer than they would have liked, it is sweet relief to finally reclaim a trophy that they have not seen for twenty four years.  At the end of the day, all I wanted to see was a close contest and I’m happy I got it.

A few people have asked whether I still feel any sort of connection with the All Blacks team.  Strangely enough…not really.  It’s weird to think four years ago I was an All Blacks supporter who was bitterly disappointed by their loss to France in the 2007 World Cup and yet here I am feeling rather indifferent about the side now in 2011.  I’ve explained my allegiance to the Wallabies previously – a growing attachment to the country that I’ve called home for the last ten years and also seeing so many players that I’ve supported for the Queensland Reds playing in the Green and Gold made it a natural transition.  But why the complete disengagement with the All Blacks?

A few things – I think I naturally gravitate towards underdogs in sporting contests.  And the All Blacks are most certainly not that.  They dominate their opposition.  They’ve only lost to about six nations in the World ever.  There are major rugby playing nations like Ireland and Scotland who have never beaten the ABs and there are others like Wales who havent beaten them in over sixty years.  I think supporting the All Blacks in rugby is a bit like supporting Manchester United in the EPL. Plenty of of people do it but its just not for me.  Although I can appreciate the skills and talents of individuals in a team, I think the drama is equally important to me.  And where’s the fun in supporting a side that wins over 90% of the time and often have the game won by halftime?

Specifically with this tournament, the other things that soured me on the All Blacks was the supporter’s insanely hostile treatment towards Quade Cooper and the frustration of watching referees continually turning a blind eye to the All Black’s foul play in the breakdown.  I found this Youtube video disecting how they did it against South Africa during the Tri Nations this year to be a pretty good explanation of their tactics.  In particular, Owen Franks and Kevin Mealamu both did the exact same thing in this video during the final against France.  The referee almost never pulled them up on it.

In short, I find it difficult supporting a supremely dominant side that not only has the lion’s share of talent but also has a hostile home crowd and referees on their side.  I’m not sure I can cheer that.

As for my two cents for the tournament as a whole – I thought it had a fantastically entertaining group stage which saw plenty of upsets (Ireland vs Wallabies, Tonga vs France, Canada vs Tonga) and unexpected close encounters (Scotland vs Romania, England vs Argentina).  There were great tries, plenty of teams showing improvement and a great carnival atmosphere.  Some bona fide classic matches were played.

When it got to the knock out stage of the tournament, all of a sudden, the free flowing rugby and scoring of tries dried up.  Other than the All Blacks vs Argentina and Wales vs Ireland, none of the other games had more than a single try.  It was a shame to see that happen.  The semis weren’t the best advertisement for the game – one match was a lopsided penalty kickathon and the other game was ruined by a refereeeing error 20 minutes in.  At least the final was competitive.

I’ll be over thirty then.