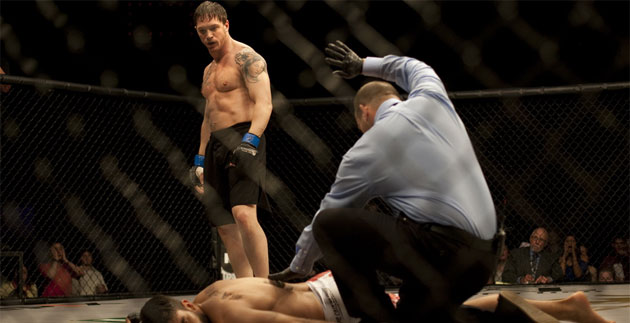 Upon consideration, its somewhat surprising that it’s taken this long for someone to apply the Rocky formula to the world of mixed martial arts.  Through the UFC, mixed martial arts has been a fast growing and high profile combat sport over this past decade, easily outdrawing WWE and rivalling boxing with its pay per view box office figures.

And now here it is: the Plucky Underdog MMA Fighter Movie has finally arrived in 2011 from director Gavin O’Connor, who previously made a flick about the underdog U.S ice hockey team who beat the ‘invincible’ Russians in the Eighties.  Given his success with Warrior, perhaps he’s found his calling.

The beauty of Warrior is its simplicity.  There is a real no-frills set up here:  two brothers enter into a cage fighting tournament with a $5 million prize for the winner.  One of the fighters, Brendan, is a suspended school teacher who risks having his home foreclosed if he does not come up with money quickly.  The other, Tommy, is a troubled Iraqi war veteran who wants the winner’s purse to help support the family of a fallen comrade.  Thats it.  We see them both prepare for the fight and then we get to see the tournament play out.  That’s the movie.

What makes things work so well is that the film succinctly establishes the character’s motives straight away and then lays out some obstacles in the form of a rival fighter (Mad Dog Grimes), an unbeaten Russian fighter (curiously played by Kurt Angle) and a sketchy relationship with Nick Nolte, a father who is a recovering alcoholic with an abusive past.  Lastly, by offering up two heroes, it keeps the viewer guessing as to who will win the tournament.  If the film was just about Tommy or Brendan, it’d be a tad predictable.  At least here, the audience will eventually have to choose one of the brother’s to throw their support behind.  Tom Hardy is pretty entertaining as the animalistic and monosyllabic Tommy but I found myself more drawn to Joel Edgerton’s portrayal of Brendan – a thinking man’s fighter who uses technique and finesse over raw power.

The fight scenes themselves are intense and visceral.  The camera gets in the thick of the fray and between the hyperbolic commentator, the soaring musical score and the sight of Tom Hardy repeatedly punching some hapless dude in the face, I found myself getting really invested with the outcome of the film.

It’s not exactly Gone With The Wind but as sports-action films go, Warrior is one of the better efforts out there.

Summary : A fun 21st century Rocky with better performances than you'd normally get for this genre.