After Melbourne Victory somehow blew a two goal lead against Perth Glory in a game where the referee did everything to tip the scales in the Victory’s favour (red card, penalty etc.), time might be running out for coach Mehmet Durakovic who’s high profile team have won just one game this season.  Inexplicably for a side that sports Harry Kewell, Archie Thompson (highest goal scorer in A-League history), Juan Carlos Solozarno (highest goal scorer for Roar last year), Carlos Hernandez (averages 10+ goals per season), Marco Rojas (one of the best young players in the comp) and Danny Allsopp (EPL experienced player), they have one of the lowest goal scoring records of any team in the competition and are playing terrible football.  The full extent of their tactics appear to be kicking a long ball upfield and hoping Archie Thompson gets it.  I guess when you set up a squad with seven strikers, it’s probably best that your strategy negates the use of a midfield entirely.

After the 2-2 draw against Perth, Mehm delivered an uncomfortably inarticulate press conference where he was asked very specific questions about his team’s morale and tactics to which he answered with a set of footballing cliches and idioms that didn’t answer any questions or fill anyone with any sort of confidence that this form would improve.  While its kinda funny to see the Victory self implode and their rabid fans turn on the coach, its probably not particularly healthy for the A-League to have their biggest club performing so badly.  Particularly after the pre-season marketing was heavily focused on the signing of Harry Kewell.  If the Victory don’t start picking up some…well, victories, then expect to see a change in leadership by Christmas.

Andy Slory, Adelaide United player and strong candidate for Worst Player In The League has reportedly parted ways with the club.  Without Adelaide United signing a replacement, they are already a better side for it.  The league has certainly attracted its share of crappy foreign players in its seven year history and Slory was one of the worst.  He was a big part of why Brisbane put five goals on Adelaide in 30 minutes.  He had some decent dribbling skills but he was also lazy, prone to getting caught out of position and looked like he didn’t give a shit.  Good riddance.

Brisbane Roar travelled to Newcastle to play the Jets in a game that would tie the alltime unbeaten record in all Australian footballing codes.  Last week, I bemoaned the fact that both Melbourne Victory and Wellington Phoenix came away with draws against the Roar by playing some negative football that was heavily defensive and focused more on not losing rather than attempting to win.  Newcastle Jets coach Gary van Egmond signalled his intentions before the game stating that they intended to take the game to Brisbane and not ‘park the bus.’

True to his word, the Jets weathered an early onslaught from the Roar where Besart Berisha uncharacteristically butchered two golden opportunities and began taking the game to the Roar.  van Egmond took a chance on a 3-4-3 formation that left the team exposed in defence but gave them greater options upfront.  As the Roar began to tire in the intense heat, the Jets found another gear.  When the Roar did have possession they found themselves in the unusual position of being driven backwards by a high pressing, high intensity Newcastle side.  After piling on the pressure, they were rewarded with a goal just before halftime from Ryan Griffiths.  It was only due to the excellent goal keeping efforts of Michael Theoklitos that it wasn’t more than that.  The tactics appeared to be working.

Somewhat surprisingly, but true to their word, the Jets didn’t sit on the lead in the second half.  They came out battling and looking for a second goal.  They almost got it less than two minutes after the kickoff when Theoklitos was once again called upon to save from point blank range.  It didn’t get much better when Ivan Franjic headered backwards on the 50 minute mark and nearly scored a spectacular own-goal.

In the end, it appeared to be a combination of fitness and composure that saw Brisbane turn the game around.  The Jets began to tire as the game wore on and after an hour, a Nakajima Farran cross found Henrique who slid home an easy finish at the back post to level the game.  The Jets continued to press forward without any reward and in the 83 min, a setpiece from the corner saw James Meyer fire home a winner for the Roar.  It was enough to see them come away with all three points and finally bring down the Jets.  35 games undefeated.  The alltime streak has been tied.

I came away from the game impressed by the Jet’s performance and what Gary van Egmond is trying to achieve with the side.  I wonder whether this game will be their turning point, much like the Roar when they lost 3-0 to Melbourne Victory before they embarked on the unbeaten run and Ange Postecoglou remarked that he was happy with his side despite losing 3-0 because they continued to play the style of football he was trying to develop at the club.  If the Jets are patient and continue to improve upon this performance, then they may well be a contender when it comes to Finals Football time in March next year.

Next week – to claim the unbeaten record outright and make it 36 games in a row, the Roar will face Perth Glory at home on Saturday.  I cannot wait. 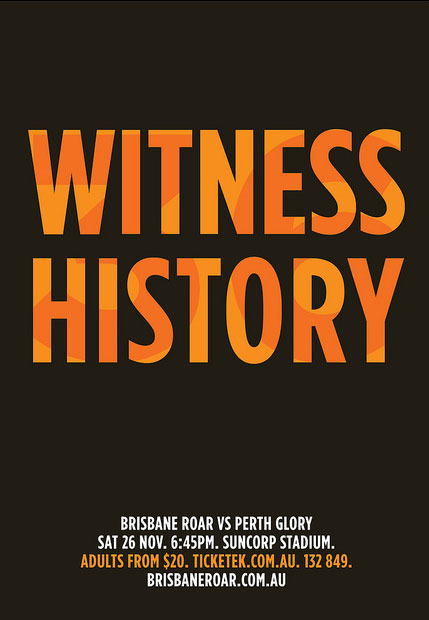 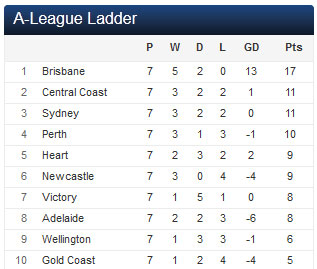 Previous: Warrior
Next: The Economics of Aging Rock Bands