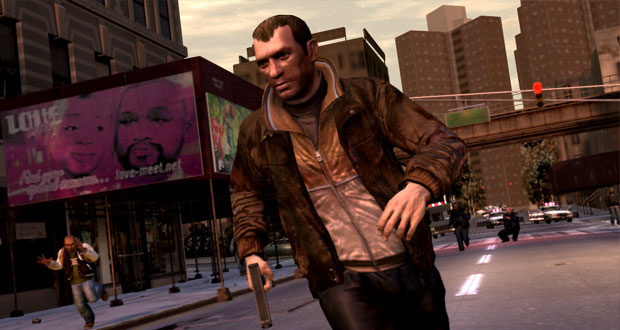 The release of GTA IV, the first installment of the franchise on this current generation of consoles is an interesting microcosm of gaming as a whole: their potential, their short comings and where they can go in future.

Grand Theft Auto IV‘s first few hours is a breath-taking experience, rivalling Bioshock’s introduction for the sheer immersiveness of the environment and the number of times you will stop what you are doing simply to admire and take in your surroundings.  This is what a next-generation sandbox environment can look like.  The Grand Theft Auto games were never about high end graphics but are more about size and detail.  Character and vehicle models don’t have the highest polygon count but the game overcomes this with hundreds of animations, lines of dialogue and smart visual effects using reflections and lighting to make the environment greater than the sum of its parts.

Annoyingly, GTA IV also subscribes to the design template used by many other companies where the upgrade in graphics and animation in the first installment of this current generation has come at the expense of gameplay options that were available in previous installments.  Gone is a huge chunk of features from GTA III: San Andreas such as the options for editing your player avatar, customizing your car, flying planes and using stealth in the gameplay.

Almost all these featurs however are likely to return in future installments.

The biggest teething problems facing GTA IV however stems from where the game initially makes its biggest progression.  What was once bolted on as a supplement to the gameplay, the storyline in Grand Theft Auto IV is now significantly more ambitious.  It’s disappointing then, and somewhat telling, that despite how clever Rockstar’s writers are at writing clever satirical content for its radio stations, they fail dismally with the main narrative.

The game tells the story of Nico Bellic, a European immigrant arriving in Liberty City, chasing the American Dream.  His character is from the same template used for CJ and Tommy Vercetti in the most recent instalments of GTA.  Nico is an stoic outsider who starts with nothing and has a desire to make something of himself through a life of crime.  Nico also shares the same bizarre moral values of his predecessors:  its okay to maim and kill thousands of people for profit or revenge but don’t do drugs because they’re bad for you.

Unlike CJ or Tommy though, who succeed emphatically and effectively start building empires of gangs and property, Nico is ultimately driven by revenge and never really gets the penthouse or the fast women he initially seeks at the start of the game.  GTA IV‘s take on modern America is that crime lords aren’t what they used to be and nowadays there are dozens of different gangs fighting over crumbs.  It’s not the Albanians, the Irish, the Korean or the Italian families that have the money and power, its the giant corporations that own and run Liberty City. 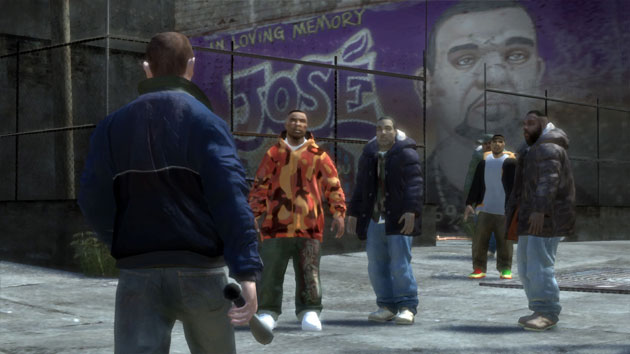 The first few hours of cutscenes and mission structure are skillfully made and succeed in creating a sympathetic and deeper character in Nico Bellic than anything seen in previous GTA games.  Nico has desires beyond money.  He is interested in women and the game fleshes out the dating mechanic beyond San Andreas’ infamously crude beginnings.  Nico has a social network of friends who he can interact with and he is haunted by his involvement in the miltary when he was in Europe.  He hopes America will be a fresh opportunity for him to settle down.

Ten hours later, Nico takes a mission from a man named Dwayne Forge where he is told to kill a man for the crime of dating Dwayne’s ex-girlfriend.  Nico does so in exchange for money.  He then also takes on about thirty other missions which also involve the casual massacring of hundreds of people, a lot of them innocents, in exchange for money.  No matter how the game is played, Nico will end up being worth approximately half a million dollars by the time the credits roll.

In one of the final missions in the game, Nico attends the wedding of his cousin Roman.  Roman is the exuberant and optimistic ying to Nico’s nihilist yang.  At the wedding, there is a drive-by shooting and Nico’s new girlfriend Kate is killed.  In the final mission, Nico gets revenge for this hit in front of the Statue of Liberty.  The game ends with a closing shot of a forlorn and sorrowful Nico feeling guilty about how Kate’s death was caused by his own actions and decisions.

This is where the game falls down hard.  Nico and the game simply does not earn its tragic ending or the sympathy it clearly wants the player to feel for him.  There is a huge disconnect between how Nico is portrayed in the introduction to the game and how it then slips into the same mission structure of the previous installments.  This format is simply unworkable for the realism and effort put into Nico’s character initially.  Even if everyone he kills is a criminal (which they’re not), the cutscenes tell us Nico is haunted by the killing he had to do in the military and yet in Liberty City where is supposedly looking for his fresh start, he can be loaded with cash and will still take on hit jobs in exchange for money.

It seems clear to me that this was done simply to pad out the length of the game.  I can understand Rockstar not wanting to design a huge environment that takes 3 years to develop if you’re only going to have a 10 hour story mode but there are other ways to approach this.  Why not enhance the quality and detail of the missions instead of going for quantity?  Or let the player control more than one character in the story.

I don’t expect this to change at all in the near future however.  The game has been a critical hit and the gaming media response has been filled with sound bytes about an ‘Oscar worthy’ story.  It’s not.  It’s a mess.  Predictably, all the pretenders to the throne such as Saints Row and Crackdown have steered clearly of attempting to take on a more cohesive narrative too.

GTA IV comes leaps and bounds over the previous generation and can still thrill you in plenty of ways.  Whether its a night at the comedy club with Ricky Gervais, the amazing Euphoria animation system or taking a chopper across the city skyline all have the ability to enthrall in ways that weren’t possible in the past.  Where Rockstar have taken the game from its roots as a top-down PC driving game ten years ago is incredible.  Now that its narrative complexity is reaching a point where the protagonist’s demeanor in the cutscenes simply doesn’t suit the sociopathic behaviour that made the gameplay famous in the first place, it’ll be interesting to see where Rockstar takes this series in the future.

Things will be different

Summary : Grand Theft Auto IV looks amazing and has a much more ambitious narrative but it doesn't quite come together. The ludo-narrative dissonance is jarring and the gameplay doesn't improve on San Andreas in any significant fashion.

Previous: Phoenix Wright: Justice For All
Next: Tetsuya’s Restaurant