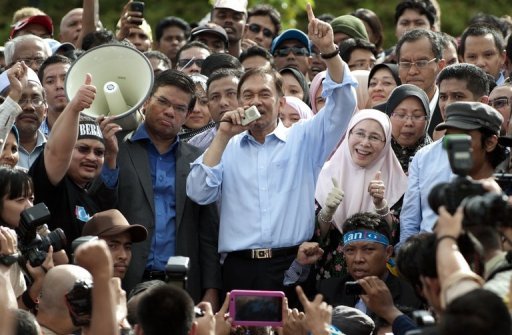 Long before the FAT website was endorsing political candidates like Kevin Rudd and Barack Obama, thirteen years ago we were singing protest songs in support of Anwar Ibrahim, a progressive opposition candidate in Malaysia who ran against Doctor Mahatir in Malaysia.  Anwar was jailed for trumped up sodomy charges to derail his campaign in 2000 and was freed four years later by Malaysia’s high courts.

His party was making strong inroads politically in 2008 and once again he faced a fresh bout of sodomy charges based on flimsey evidence that was questioned by human rights observers.  This Sunday he was once again aquitted by the high court.  Upon his release, Anwar made his intentions known to once again run for office.  He also slammed the Australian Labor Party’s proposal to process asylum seekers offshore in Malaysia.  What a cool dude.

Anyway, for old times sake, here it is, the original Salt Monkey’s song about Anwar and his struggle against Mahatir Mohamad from 1999: