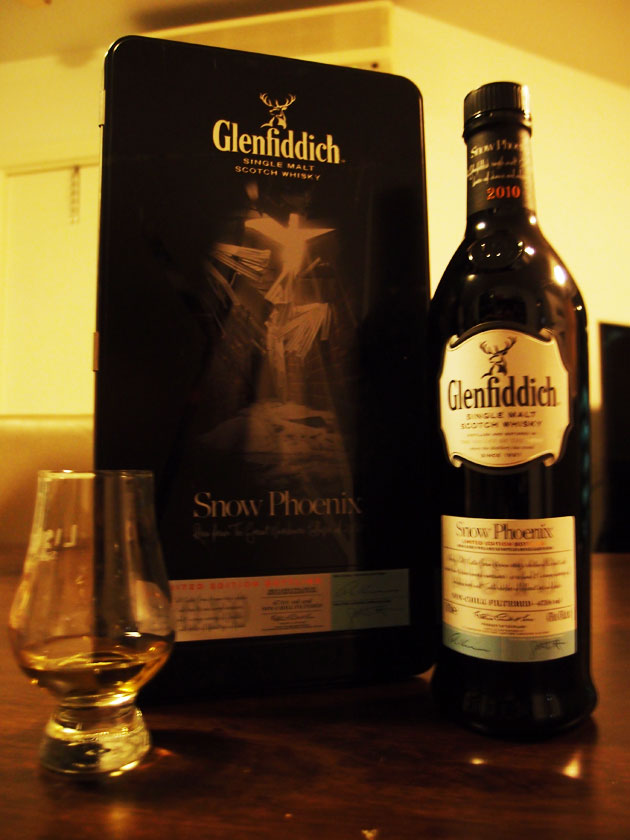 NOSE Like the stuff dreams are made of (serious answer:  honey and pears mostly)

FINISH A very strong and distinguished flavour that lets you taste and savour its palate on your tongue.  It’s potency belies its relatively mild alcohol content.

NOTES Part of the fun of collecting and exploring whisky is getting your hands on the occasional novelty bottle.  The Glenfiddich Snow Phoenix is a limited run of blended whisky that was distributed after a particularly heavy snowstorm in the winter of 2009 saw that caused the roof at the Glenfiddich distillery to cave in, exposing the casks to sub zero temperatures.  When these casks were salvaged, a selection were put together in this delightful blend that comes in a seriously bad ass looking case.

I love the fanciful writing they have on the label:

“Born out of months of heavy snow during Christmas 2009 when four distillery rooves collapsed. This whisky is a tribute to those who rescued many oak casks from winters bitter cold. Snow Phoenix was created by marrying together natural strength and non-chill filtered casks of different ages and finishes, including American oak and Oloroso Sherry. The result is a single malt, gold in colour with bright copper highlights. A must for any whisky connoisseur or collector.”

Funny story about my bottle.  I searched high and low for this damn thing and couldn’t find it at First Choice Liquour or Dan Murphy’s.  Anywhere we could find it, it would sell out in seconds or be hideously marked up in price.  I had all but given up on getting a bottle when one day, on the way to a BBQ, I swung by the bottle shop next to my local train station to pick up a six pack.  Low behold, I saw the Snow Phoenix staring back at me from behind the counter.  I don’t the guys in the store really cared about what they had.  It was sold to me at under recommended retail price and it was sitting in such an obscured spot on the shelf that it was impossible to see unless you went up to the counter for a purchase.  A lucky find.