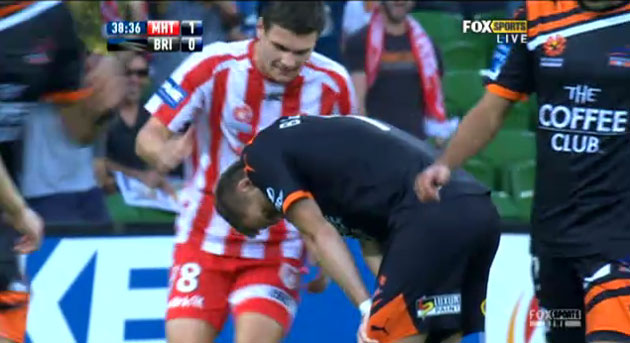 The Brisbane Roar played a competitive game against Melbourne Heart in their Round 18 fixture at AAMI Park but despite playing close to their best, could only manage a draw.  Besart Berisha flubbed a penalty in the first half but then went on to score his 11th goal which cancelled out Jonatan Germano’s goal for the Heart.  Comparatively, the Central Coast Mariners were far from their best but came from behind to beat Adelaide United 3-2, giving them an eleven point lead at the top of the table and all but ensuring that they will win the Premiere’s Plate.  The Mariners are undefeated in 15 games now and need just 10 points from a possible 21 to wrap things up.

At this juncture of the season, the key will be to secure second place in the table and to beat the Mariners in a fortnights time to give them a psychological edge when it becomes Finals Football time.  The Roar seem close to recovering their form and are now unbeaten in five.  They just need to find that fifth gear before it gets to the knockout stage of the competition.

As for the Mariners, they are looking in fine form.  They have perenially been a strong, underrated side in the competition having contested three out of seven grand finals despite never quite winning the big one.  They’re used to flying under the radar but now the spotlight is well and truly on them as the league leaders.

In the meantime, it continues to be a terrible season for the two former giants of the competition Sydney FC and Melbourne Victory.  It’s hard to believe two seasons ago they were competing in the final.  Sydney FC must be just a couple of losses away from assessing the viability of keeping Vitezslav Lavicka and meanwhile former Ipswich coach Jim Magilton has had a torrid time at Melbourne Victory, having seen his side yet to record a win under his tutelage.  Both sides look like they will miss the finals at this stage, a big blow considering the pre-season hype was almost exclusively based around these two teams and their new signings Harry Kewell and Brett Emmerton.

The Mariners may have run away with the league but after that, its absolute logjam in the middle of the table.  The top six sides will go on to play Finals Football and right now, other than Gold Coast United, all the other sides and still in the hunt.  With seven rounds to go, there is still everything to play for. 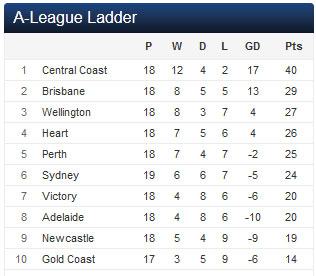