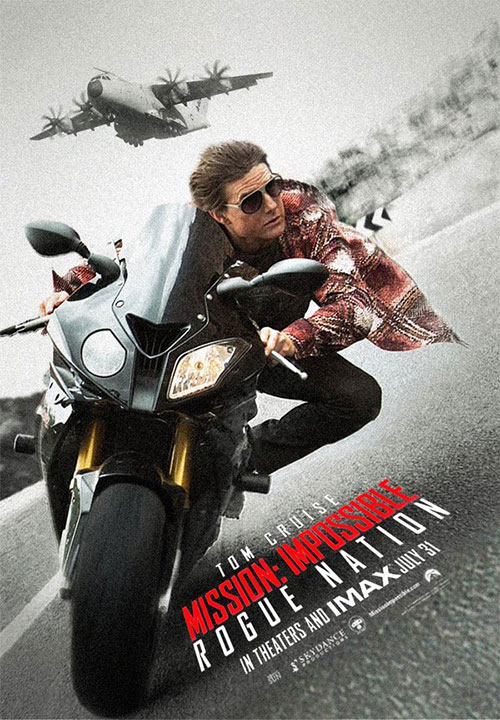 I came into Mission: Impossible Rogue Nation with high spirits.

You might think there’s not much reason to be excited about a fifth Mission: Impossible film but I remember thoroughly enjoying the fourth instalment which was directed by Brad Bird and included some jaw dropping real-life stunt work, most famously a scene involving Tom Cruise hanging off the side of the Al Burj building in Dubai.  Genuine stunt work, without the aid of too much computer effects, goes a long way in boosting the appeal of an action film in my eyes.  And the early signs for Rogue Nation were good.  I remember seeing some photos of Tom Cruise hanging off the side of a plane as it took off.  Age doesn’t seem to have slowed down Cruise any.  It looked like more of the same good stuff.

If you can feel a pretty big ‘but’ coming on, you’re right.

Mission Impossible: Rogue Nation wasn’t the film I hoped it would be.  It is slickly put together, is shot in exotic locations with fast cars, high tech gadgets and terrorist goons armed to the teeth for Ethan Hunt to dispatch but the whole enterprise feels incredibly formulaic, by the numbers and crushingly uninspired. 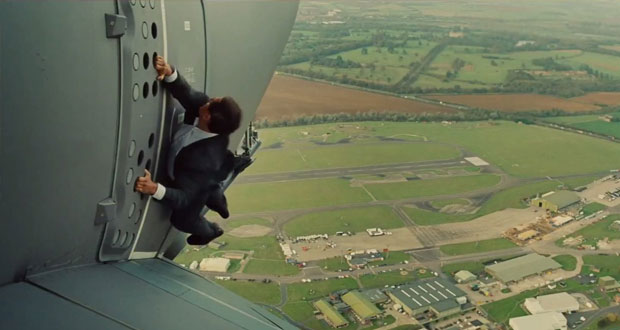 The film barely has a plot.  The villain is almost completely anonymous and devoid of any meaningful character or purpose.  Basically, what we get are five set pieces stitched together.  Stopping a plane with the illegal cargo, an assassination job at an opera, a heist to fetch a MacGuffin, a car chase and a final showdown.  You can practically see the checklist appear on the side of the screen as Ethan has a car chase, Simon Pegg delivers a one liner about how crazy he is and then a nameless goon takes a spill off his motorbike and something explodes in the background.

Not surprisingly, Rogue Nation is at its best in its second act with the heist mission.  In one of the few links left to the original series, Ethan and his team are tasked with breaking into a well protected underground vault to steal a memory chip that contains classified information about the terrorist organisation Syndicate.  The sequence involving Hunt underwater, desperately trying to carry out his mission in the time he can hold his breath was genuinely well put together and I can recall the packed theatre falling completely silent – everyone collectively holding their own breath – watching the action unfold.

The rest of the set pieces don’t fare quite so well.  We’ve been pretty spoiled for quality action movies in recent years with The Raid films and Mad Max: Fury Road setting some tall benchmarks for car chases and hand to hand combat.  Unfortunately, Christopher McQuarrie nor his editing team are able to bring anything to the table to rival those films and in their absence, you look to a sharp script or fresh ideas elsewhere and unfortunately Rogue Nation comes up empty handed on that front too.

Take the laughably marginalized role for women in this film.  There are precisely two speaking roles.  The first lady gets her brains blasted out inside the first five minutes.  Rebecca Ferguson is given a little more screen time than that but she is subjected to a camera lens with a leery male gaze, almost permanently fixated on her buttocks.  It feels incredibly dated.  They even have an obligatory scene where she undresses and takes off her top in a coy PG-13 sort of way where the camera cuts away.  It doesn’t even really serve a function to titillate.  It just seems like everyone is going through the motions of what a femme fatale does in this sort of film.

Rogue Nation is a disappointing step backwards for the Mission: Impossible series.  From the looks of the ending, I presume this won’t be the last instalment.  I will certainly approach Mission: Impossible 7 – Mission to Moscow or whatever they come up with, with a far greater level of trepidation.

When the IMF is disbanded, Ethan Hunt and his team are forced to take down the shadowy Syndicate on the own

Summary : Tom Cruise doesn't say "I'm too old for this shit" at any point in Rogue Nation but he probably should. Disappointing.

Previous: Trainwreck
Next: The Girl On The Train by Paula Hawkins