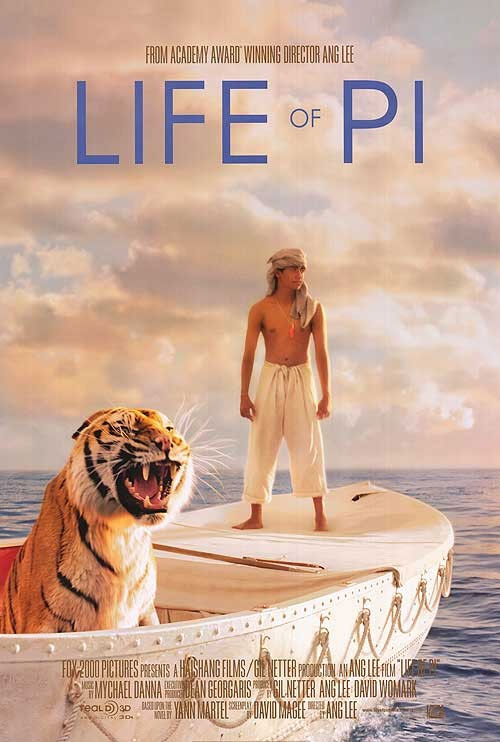 Yann Martel’s novel Life of Pi was a highly acclaimed and award-winning piece of literature that received praise from no less than Barack Obama who wrote to Martel in 2010 and stated that Life of Pi was “an elegant proof of God, and the power of storytelling.”

Spirituality is at the heart of the novel and so it is with the film.  The eponymous Pi is a young Indian man in the Seventies who lives with his family that own a zoo in a town called Pondicherry.  Pi is short for Piscinne, an unusual name which he regrets, as it sounds too close to ‘pissing’ which proves irresistible for Pi’s classmates.  Pi re-invents himself by pulling a stunt in a classroom where he accurately writes out the value of pi over several hundred digits, filling out an entire chalkboard.  It’s hard work but he successfully gets his new abbreviated name to stick.

Even for India, home to a hundred deities, Pi is unusually taken by religion.  He is born a Hindu but when he enters a church seeking something to drink, he becomes taken with Christianity.  Not long after, he also takes up the call to prayer and becomes a practicing Muslim.  All of this is a source of consternation for Pi’s father, a scientist and atheist.

Early in the film, Pi’s father is alarmed when he finds Pi feeding a tiger in dangerously close proximity.  He decides to teach Pi a lesson by showing him a live feeding of a goat which the tiger quickly kills and consumes in unceremonious fashion.  Pi’s father urges him not to romanticize the animal instincts of the tiger.  This lesson in staying grounded in harsh realities of mother nature becomes an interesting juxtaposition to the events that unfold later in the film.

Generally speaking, Pi’s life in India is idyllic and intriguing.  I could happily have seem a different film play out that simply offers a look at a slice of life for Pi and his family in their day to day lives.  An Indian We Bought A Zoo, if you will. 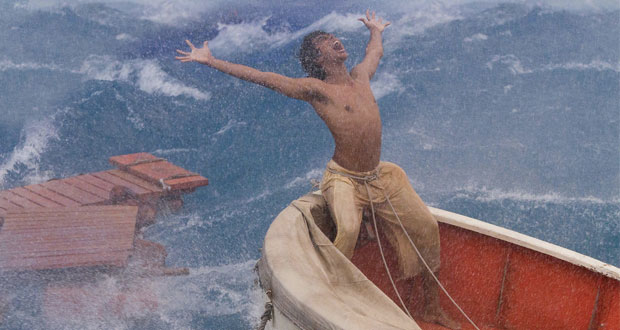 Instead, political and economic instability forces Pi and his family to uproot and move to Canada by sea.  Disaster strikes when a storm sinks the ship, leaving Pi on a lifeboat with a zebra, a hyena, an orangutan and a tiger named Richard Parker.

From here on in, we watch Pi’s struggle to survive as he problem-solves his way around living on a boat with zoo animals, summoning all his spiritual strength to keep hope of rescue alive.

In both the book and the film, it is made very apparent that Pi is not necessarily a reliable narrator and as a result, some fantastic events occur on his voyage, from his encounter with flying fish to running aground on a curious island populated by meer cats.  Happily, I felt that director Ang Lee really did these sequences justice as he gives them a spectacular, dream-like quality.  Lee has a bit of mixed reputation as a director in the West but I felt he has always had an eye for sumptuous imagery which suits Life of Pi to a tee.  Cast your mind back to the servings of food in Eat, Drink, Man, Woman or the comic book framing and transitions in Hulk.  He was well suited to bringing Life of Pi to the big screen.

Life of Pi is a terrific film that is engaging on face value but also has the depth to be appreciated further as a modern day parable.  As a tale concerned with faith, spirituality and religion, it casts a wide net of ideas and doesn’t give away any easy answers as to author’s intent.  It’s a great conduit for whiling away a few hours talking about life, the universe and everything.  The film does the book justice and the combination of Lee’s steady hand as director and a captivating lead performance from Suraj Sharma make this an easy film to recommend.

Summary : A beautifully made film about life, death and the spiritual journey to make sense of it all.